I am running a mean reversion strategy. I have question with regards to half-life; I have heard of OU process to determine the half-life but it's not giving me that kind of result.

Can anyone advise another way to identify half-life or else any other indicator that I can use to trade to support my Z score?

The OU process is:

Here's an example of the use of the OU method.

To me, the problem is identifying processes that actually have a reason to bleed down to the mean, and that show statistically significant results. If you can identify the "bleeds", then you can build a model of a "bleed". From that, you can determine if the current "bleed" is taking longer than 95% (or whatever % you like) of the "bleeds" that you modeled.

To illustrate some considerations, I'll use the picture from one of Ernie's examples at this link: 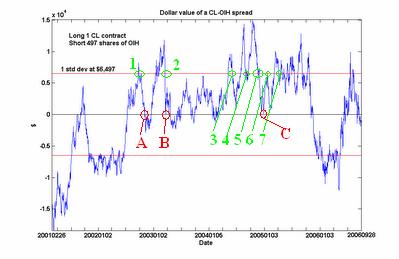 As you can see, trades 1-A, 2-B and 5-C are all profitable "bleeds". However, entries 3, 4, 6, 7, (and others that I didn't label) are garbage. You'll have to come up with a way to get out of those positions without wasting too much time and money. The costs of closing out the garbage have to be subtracted from the gains of the bleeds to determine if this pair-trade is worth trading.

Now look at another potential pair:

Using the same general idea, this trade might have less garbage to deal with. My point is, choosing the right pair is probably the most important part of pairs trading.

Not the answer you're looking for? Browse other questions tagged mean-reversion or ask your own question.