Is the market really Normal. Is Implied Volatility Historically Correct?

Ok. So as of 6/10/2014's market close the SPY was 195.6 and the VIX closed at a ridiculous recent low of 10.99. Now because the VIX (IV) is the implied volatility of 1 month contracts on the SPX and because this 1 month figure is quoted annually, we take the current value of the VIX and multiply it by sqrt(20/250) to convert it to a true monthly figure.

Running through how many days we broke above:

From the results it seems that the market is more normal that we actually though. But other empirical evidence has shown otherwise. From the results I am seeing, It seems to suggest equity prices are normally distributed. We don't see more fat tailed events more than the normal distribution suggests. Can someone shed light if I ran the analysis incorrectly?? 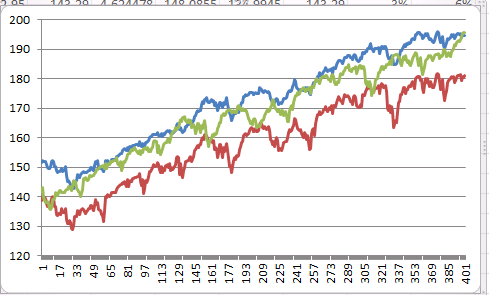 Not the answer you're looking for? Browse other questions tagged implied-volatility spx standard-deviation or ask your own question.

8
If VIX is the Implied Volatility of SPX, 30 days in the future, how many days into the future does VIX vol look?
8
What really drives option implied volatility?
2
Is implied volatility flawed?
2
Log-normal Volatility Approximation
0
What the implied distribution really is?
9
No arbitrage conditions for normal implied volatility
3
Calculating “annualized” standard deviation from monthly returns and the different month lengths