What are the implication of a negative risk-free rate on SML?

What happens to the Security market line (within the CAPM model) when the risk-free rate turns negative?

When we discuss CAPM it assumes a lot of things about the market and investor behaviour. There is enough literature on "CAPM doesn't hold". In fact most low beta stocks plot above the security market line (SML). So it would be a mistake to take CAPM so seriously in practice and I would cross question if CAPM works as it is?

In theory, if there are negative interest rates then according to the CAPM equation you would have a negative intercept. Also the market premium would go up by the amount of risk free rate. But this is pure mathematics and one should ask the question, is there value in holding risk-free asset?

This paper is a good reference to read about low beta anomaly.

I would like to note one consequence of negative riskfree rate:

The Market Portfolio does never equal the GMV Portfolio though, since the slope is infinite. 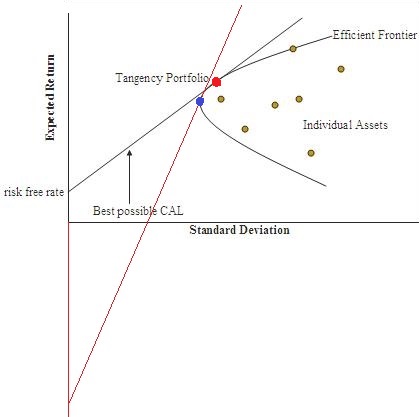 Implications of negative yields on the short end of the US treasury securities yield curve on the pricing of risk assets using the CAPM:

1- the riskless point on the origin can sink and stay negative.

(1) the "no-investment" option that suggests that risk-free cannot really go negative is not an option. For two reasons:

(1a) there is a theoretical arbitrage to be had putting banknotes in a vault, assuming said vault was perfectly secure and cheaper to keep secure than the interest burden on your cash. Except just try it. I take my life-savings in paper and hoard it. How do I then buy a car or house with those $100/CHF1,000 beauties? The alarm bells will go off, faster than I can say "Anti Money Laundering Officer". The costs that drug dealers and corrupt officials habitually bear turning banknotes into bank deposits is ample evidence that the arb doesn't really exist.

(1b) even if you could manage the "no-investment" trick, someone else somewhere else will have to do it in your absence. Whatever you bought to get rid of that cash, it becomes their cash. And so on. The cash can move around the banking system, but it will be in someone's account at the end of every day; matched by a bank reserve at the central bank. The money does not simply disappear (unless the central bank elects to take it back).

So at the end of every day, someone is looking at a figurative cash versus securities option, with a negative rate on the cash. If they manage to dodge that choice by investing in securities, they are still making that choice by sitting in securities, because they know what the opportunity cost of switching back to cash would be. And if (a big if) they did manage to "not invest", they would simply force the dilemma onto someone else who must. The system doesn't care whether it's you or him/her making the decisions here.

(2) If you take the classic fish-hook profile of a textbook efficient frontier, cash rates don't change this curve. They just move the vertical reference point - the return for zero vol - on the Y-axis. This simply steepens/flattens the slope of the SML to the tangency portfolio. Which in turn moves the tangency portfolio up or down the frontier.

So imagine cash rates equal to the highest-returning asset in your portfolio. The SML is flat, and your tangency portfolio is limit-long Argentina.

Cut rates, and the tangency portfolio rolls down the efficient frontier, until at some point, it will hit (and stay) at the Minimum Variance Portfolio (ie the leftmost point on the EF). At this point, the SML will be so steep that investors are paid so much to tolerate volatility, that it will be more rational to lever up on MinVol than to asset-allocate to any other asset mix. Cash is simply so dear relative to "Assets", borrowing Cash to buy more Assets is a superior option to differentiating between different kinds of Asset.

Note that this process applies for any change in interest rates, positive or negative. There is nothing special about the difference between +0.1% and -0.1% whatsoever.

(3) Except of course, you cannot hold-constant the efficient frontier thus in reality! It's messy; and different asset allocators hold very different views about the impact of interest rates on asset yields, even on volatilities, maybe even on cross-asset correlations.

All that really be said is that:

Consider a very simple, classical, hypothetical market construct. You have a long-term government bond, with duration risk as above. And you have stocks that embed an equity risk premium on top of this bond yield. Assume for simplicity's sake that the ERP fluctuates independently of interest rates and bond yields. It is equity-specific. Lower rates -> lower yields -> greater convexity -> higher bond vols will then increase stock:correlations. Because the BY variance is up and the ERP variance is not, the former represents more of the aggregate equity variance mix. Stocks "look more like" bonds. Higher Correlations flatten the efficient frontier.

There is a LOT of "debate" about these effects. So you can't take them for granted, let alone with a hard-and-fast rule of thumb as to the size of the effects. But we can say that nobody argues for higher yields, lower vols and curvier frontiers. The debate is all about if and how much the opposites happen.

Not the answer you're looking for? Browse other questions tagged capm or ask your own question.

2
Why do stocks with a negative beta return less than the risk free rate?
2
Risk-Free Rate determinant in CAPM
2
Risk-Free Rate In CAPM
1
Understanding Fama/Frenchs' Five Factors - Returns or Excess Returns?
0
Calculating idiosyncratic risk of stock without beta or risk free rate
3
Does the CAPM use the single index model?
0
Understanding what is 'special' about the security market line
0
How is CAPM used to price an asset once it has been used to derive the assets expected return?