Is an economy where money yields interest able to be sustainable and healthy? If yes, how?

There are two points that concern me

If you deposit money, you get interest. The amount of your balances increases exponentially. With - again - 5% interest the function describing the current amount is: f(t) = f0*1.05^t. t being the time, f0 being the balance at time t = 0. 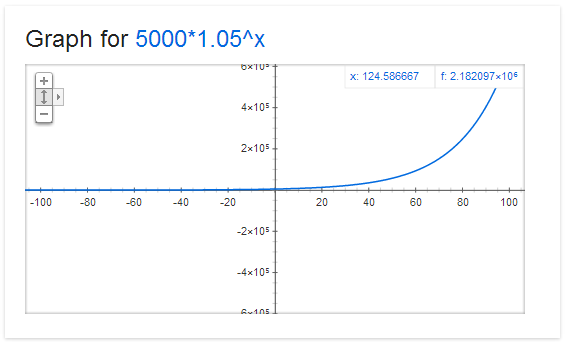 Starting with 5000\$ after 50 years you have about 50,000\$ (little more than 3 duplications), without doing something for it, besides sitting on your money.

These two points above doesn't look like principles you would apply to anything sustainable. I don't see any equilibrium. So, is an economy where money yields interest able to be sustainable and healthy? If yes, how?

I think that you have to distinguish between a 'fiat' (modern) monetary system and a 'gold standard' one. But sustainability will always be ensured endogenously, one way or another.

Fiat money is created whenever a loan is made, and the \$50 you describe will be created endogenously in the economy. Advocates would call it a virtous rather than a vicious circle, as you (or someone else) would use the \$1000 for a productive purpose that generates growth. In addition, inflation which is present in fiat systems, will erode part of the value over 50 years. Overall the system is sustainable as new 'money' enters the system directly or indirectly. But to understand the fiat system you should look at it in a more holistic way, rather than one transaction at a time.

Under fixed money supply like a 'gold standard' things are different. But, as far as I know, for the centuries that we were under gold standard interest rates followed the mining of gold and the relative debasement of coin by the monarchs. There is also no persistent long run inflation (there has been a comparison of the wages of a US Army Private/ Roman Legionary and US Army Captain/ Roman Centurion: measured in gold oz, their compensation was broadly the same). On the other hand, defaults and panics were more severe. Therefore sustainability is ensured --to the expense of high volatility, as episodes of inflation are followed by deflation.

The interest does not necessarily come from another loan. The ECB is paying interest to banks which is essentially to create ("print") new money. It is a fact, that the money supply is constantly growing over time, which in a simple model would just equal the interest paid out on loans.

That does not necessarily have something to do with the economy being sustainable or not though, as the tapering of the money supply usually leads to inflation, so the interest income in your graph gets offset by higher prices.

In my opinion, the interest level is just some overall equilibrium, which is but unrelated to the real economy.

If more money/interest is issued, there can be two cases: a) Productivity increased, then there is more resources and money, so prices stay same, thats real growth. b) Productivity did not increase, then you have more money for same/less resources, so resource prices inflate. In this case, money grows, but prices grow with it, so having more money gives no additional real resources. Over time, you may have increasing money and productivity, but when productivity reaches its limit, the additional money then just causes more inflation on the same (nongrowing) resources.

So real growth and nominal interest are independent, as they get balanced by inflation.

The bank in which you deposit your capital doesn't create the money to pay your interest; it earns it by lending to someone who can make good use of the money. The textbook example is a farmer who borrows £1000 to spend on fertiliser, gains £1200 in extra crop, and repays the bank £1000 plus £100 in interest. The bank gives you £50 for the use of your money, and all three of you are happy. But notice it doesn't actually matter to you whether the bank lends the money to a farmer, a startup company, or somebody with a foolproof system for beating the Las Vegas casinos; the bank pays you an agreed sum for the use of your money, no different in principle from paying rent for an office. If the bank makes better use of the money than you would (as they should do, being professionals), they make a profit from helping someone else create real wealth. That's perfectly logical and sustainable, indeed at best it's self-reinforcing; next year the farmer borrows £5000 to buy and plant a new field once the bank works out that his gains will more than pay for the interest; hey presto, your money has helped produce food that would not otherwise exist, and made a small profit for you while doing so.

It gets more complicated when the bank makes loans (directly or through a central bank) to the government. But though a government can just print more money when it has to repay the loan (indeed that's the only way it can work; how would you expect the US Treasury to redeem a dollar bill except by giving you another dollar?) they are not exempt from the laws of economics. Those governments that run a deficit are borrowing money; from bond purchasers, from foreign banks or in the last analysis from anyone who accepts a banknote in payment of a debt. Most governments have a lot of security to pledge, so are considered good credit risks. And the things they spend the money on are, in theory, large-scale versions of buying fertiliser to improve future crops; the British National Health Service was justified by the Treasury of the 1940s on the grounds that reducing the number of days that workers were off sick would more than pay for the hospitals, and the increased happiness would be a bonus. (Whether that actually worked depends on what accounting you use).

So governments, just like anybody else, borrow money in the belief that the good they can do with it justifies the amount they will have to pay for the use of the money; they can continue to do this as long they invest wisely enough, and pay interest rates high enough, to maintain confidence in the currency. In the 19th century, banks that issued their own currency sometimes issued more than they could redeem, had speculators buy up the notes and present them for redemption all at once, and went bankrupt. Your government could in theory do the same, in which case the money you keep in that currency (as opposed to in usable property) would be worthless, unless it has the artistic value that Confederate or Czarist banknotes have now. Most of us think the risk low enough that it's worth rising above a barter economy.

Not the answer you're looking for? Browse other questions tagged economics interest or ask your own question.