Trading over a Ornstein/AR process

For a OU/AR(1) process is there anyway to analytically calculated most probable period of time the process is likely to diverge from the average, before turning to converge.

Basically I am looking to derive a proof that under an OU/auto-regressive process a profitable moving average crossover strategy exists.

Consider an (arithmetic) Ornstein-Uhlenbeck process as a model of the asset price $X_t$:

where $\mu$ is the mean-reversion level, $\sigma$ is a volatility parameter, $W_t$ is Brownian motion, and $\kappa$ is the reversion speed. An Ornstein-Uhlenbeck process will revert to the mean infinitely often if $\kappa > 0$ and the characteristic time scale for reversion is $\kappa^{-1}$.

The exact solution over an interval $[0,t]$ is

The formulas are complicated, and in my view of limited practical value (as I discuss below).

Here is a reference:

In theory, a profitable trading strategy certainly exists for an asset that exhibits a stable mean-reverting behavior. There are many variations such as putting on a trade when the price deviates from the expected reversion level by a fixed amount in a binary fashion, or entering and taking profit in a continuous fashion.

However, in real markets, assets seldom exhibit stationary mean-reversion with predictable reversion levels. Mean reversion may persist for a period of time and then suddenly break down. The assumption of a stable reversion level is, generally, the weak link in the chain -- leading eventually to a large draw-down.

In practice, a more robust trading strategy allows the expected reversion level to adjust gradually as a moving-average. Position size may also be adjusted based on historical volatility. The graph below shows trading profits (without transaction costs) for a simple mean-reversion strategy applied to the EURSEK currency pair. In this case, position size is proportional to the deviation of the exchange rate from a 1-month or 3-month moving average (using daily NY market closing levels). The position size (long or short) is not allowed to go above a cap based on the percentage deviation form the moving average.

The 3-month moving average adjusts more slowly than a 1-month average -- so the position sizes tend to be bigger -- yielding a bigger mean return but with much bigger drawdown when the mean reversion breaks down (late 2008, for example). 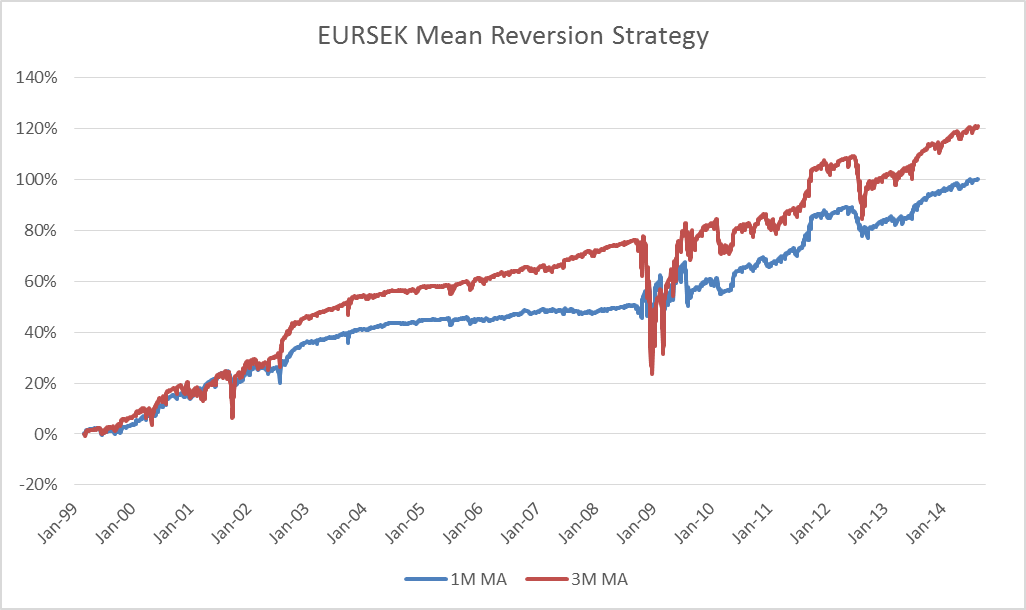 Not the answer you're looking for? Browse other questions tagged quant-trading-strategies stochastic-processes stochastic-calculus proof or ask your own question.