This has been bugging me for a while. I've consulted all sorts of guides, but none gave me a satisfactory answer. My question is: why do Earnings Per Share (EPS) matter? What is it about this metric that gives it any weight? Why do analysts care about EPS?

Here's a sample explanation that I found unsatisfactory:

EPS is a carefully scrutinized metric that is often used as a barometer to gauge a company's profitability per unit of shareholder ownership. As such, earnings per share is a key driver of share prices.

I think that EPS is basically meaningless because the number of outstanding shares is variable. The company chooses how many shares of stock to issue. For example, Microsoft has about 8.24 billion shares outstanding, whereas Amazon has about 462 million shares outstanding. If there's a difference of an order of magnitude in the number of shares, then that's going to be reflected in EPS -- making raw EPS not very useful.

Granted, it might be useful to track EPS of a company over time, but as the number of shares issued is usually constant over long periods of time, that's effectively the same as tracking raw earnings.

So, why is EPS regarded as an important metric?

What matters is not so much the EPS but the EPS growth, EPS growth stability and PE. Of course when looking at a historical series of EPS for a given stock you have to adjust the series for capital changes otherwise it is useless as you mentioned.

Future EPS are a good approximation of that stream and there is a very high correlation between earnings growth and performance of a stock over the long term. So if you could predict the future earnings of a company you could also make money in the markets.

Yes, if the capital structure of a company were trivial and constant over time, then technically it would be enough to track earnings.

The per share basis is probably necessary to make a few metrics comparable when they are used together to compare investments. Since the main one, stock price, is per one share then it becomes necessary to adjust the raw earnings in a similar way, on per share basis.

EPS or EPS growth are key parameters for the valuation models, such as Gordon's model (Present Value of Dividends, including or not firm growth). Hence, analysts use these models, even arbitrary simple, to find the intrinsic value of the firm and set price targets (The fundamental value of the stock). Note that before applying a simple Present Value model, analysts implement a rigorous accounting valuation, breaking down firm to segments or products and model their respective cash flows.

Hmm... lots of confusing cross-currents here. EPS has many legion problems; but so too do "earnings" and the "per share" adjustment does matter.

Let's start from first principles. How much would you pay for a stock? For simplicity's sake, let's assume that you could predict the future path of future earnings with some reasonable degree of error, including most obviously their future growth. And, second assumption, that you very firm ideas about what the stock will/must return in the future. You will or won't buy it fair value (irrespective of whether there's an equivalent or superior alternative).

In that stylised case, you'll take your earnings, discount them, giving you a market capitalisation. And divide that by the sharecount to give you a price per share. Which is the same process as putting a PE a multiple on a series of future EPS.

This second problem is the key problem behind trying to value any company based on a single year's earnings. The first problem is the key reason why you have to adjust earnings by the sharecount, because a changing share-count WILL change the valuation of the company and its shares.

So take three companies. The normal one has earnings/EPS of 100, growing at 5%. Then you have one at 120 and one at 80, that will converge on normal over time (next year is the average of normal and 5% growth). Discount those, and a 20% change in current earnings only makes a ~2% difference to valuations versus a 15% change in valuations. It's hopefully clear how/why obsession with any single earnings print can very quickly become rather misleading (absent the proper context). 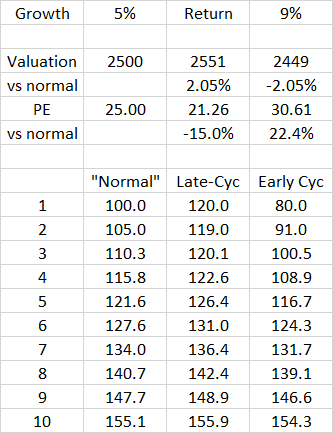 Of course this does not mean that Earnings and/or EPS are irrelevant. They are massively important. The market is just discounting a stream of future cashflows, in which the current/next is just less much less significant than the airtime it gets in the business news.

But then if you take three "normal" companies (as above), they have four distribution decisions to make in real term. They can invest = rising earnings, rising EPS and DPS. They can pay it back to shareholders, flat earnings, flat EPS. Or buy back stock, flat earnings, rising EPS. All of these will - all things held equal - deliver the same returns to shareholders, albeit by very different means. Each respectively represents the same share of a bigger company; the same share of the same company plus an income, or a bigger share of the same company. None of these is inherently "better".

Of course, the real world is only ever in equilibrium like this in a "broken clock is right twice a day" fashion ;-) Plus there is a fourth option, not mentioned above. That is using retained earnings to raise cash and pay down debt; or funding any combination of the three above by borrowing and levering up.

There is thus a trade-off between the company's MARGINAL returns on capital it make on its capex; its dividend yield; its earnings yield (1/PE); and its access to and cost of credit. If say marginal returns on new investment were deemed low, and PEs low, then it can make perfect sense to grow EPS by lowering the sharecount in preference to growing Earnings. And vice versa.

The point being that there is no magic formula like "earnings are important" but "EPS is not". "Or earnings matter; but dividends don't" etc. There are just different incentives for companies around different uses of cash at different points in time, as the spreads above evolve. Getting these right can make a huge difference to shareholder outcomes - and what "right" means for different industries can look very different.

Consider eg tobacco. A falling number of smokers, who smoke fewer cigarettes means shrinking volumes in core markets. Product prices do rise, but that's all sin taxes, means falling revenues in core markets. Some new markets have opened up in EM, but they smoke cheap cigarettes so aggregate product prices have fallen into flat volumes. Revenues and Earnings haven't risen in any discernible way, for a couple of decades now. EXCEPT ruthless capital efficiency (balance sheet as well as ruthlessly using cash-cow cash-flows to shrink its capital base) mean that the industry has managed to consistently grow EPS faster than market in a structurally shrinking marketplace. I think (not 100% sure, but close enough if wrong) that it's still the best performing sector globally over the last 20 years (small matter of the dotcom bust in Tech, there). So there, I would argue, is a pretty good case study that EPS can matter! On the other side, recent Chinese history is a pretty good story on the other side - lots of earnings, lots of earnings growth, but very little for shareholders to show for it, given the endless capital-raising dilutions.

Not that this is a generally illustrative example that can be abused elsewhere, of course. It is an over-played and much-abused concept. But not a useless one, so long as one is clear and conservative thinking about it.

They don't. Its an overstated statistic imo for the exact reason you stated. The number of shares in a company change over time. Company EARNINGS matter (a great deal) but the EPS not so much.

Both companies have the same EARNINGS but very different eps.

Not the answer you're looking for? Browse other questions tagged earnings or ask your own question.

3
Where to download Earnings Conference Call transcripts?
4
How are Quandl monthly S&P500 earnings estimates derived?
1
API for Earnings date
1
Question on earning per share
0
Computing the denominator of diluted earnings per share