I'm currently reading Iain Clark's book Foreign Exchange Option Pricing and I got stuck at one sentence in the beginning of Section 3.3 that I feel is important to understand. He writes:

where by $T$ he refers to the time left until expiry of the option. My question is: how do you know (or argue) that just because there is an option with expiry in 1 week that is out-of-the-money a similar option (with bigger $T$) will be very close to at-the-money?

[1]Mathematically, the simple delta is a discount factor times the foreign-numeraire risk-neutral probability of finishing in the money. Psychologically, just think of it as probability.

Delta is not the probability of finishing in the money as suggested in another answer, N(d2) is. The foot note mentions this. See Understanding N(d1) and N(d2): Risk-Adjusted Probabilities in the Black-Scholes Model by Lars Tyge Nielsen for a detailed explanation. If time and vol is low, $d1 \approx d2$ and delta will be closer to the risk-adjusted probability of the event that the option will finish in the money, which is $P(S_T > X) = N(d2)$.

Actual moneyness in terms of spot is unaffected by time. The same strike $K$ will always have the same moneyness against spot. E.g. is $S=1$ and $K= 1.05$, moneyness will be $1.05/1-1 = 5 \% \ OTMS$, where OTMS stand for out-the-money-spot. However, moneyness in terms of forward is affected by time, but does usually not make it more ATM either. Using covered interest rate parity and continuous compounding $$fwd(s,ccy2,ccy1,t) = s*exp^{(ccy2-ccy1)*t}$$ one can see how the value of the forward depends on the relative size of the two interest rates (and time). For a 10y forward, the moneyness in terms of forward would be $\approx 14\% \ ITMF$ with $F_{10y} \approx 1.22$ and $K=1.05$ as above. So this is actually further from ATM than spot moneyness (and it flips the side from OTM to ITM). 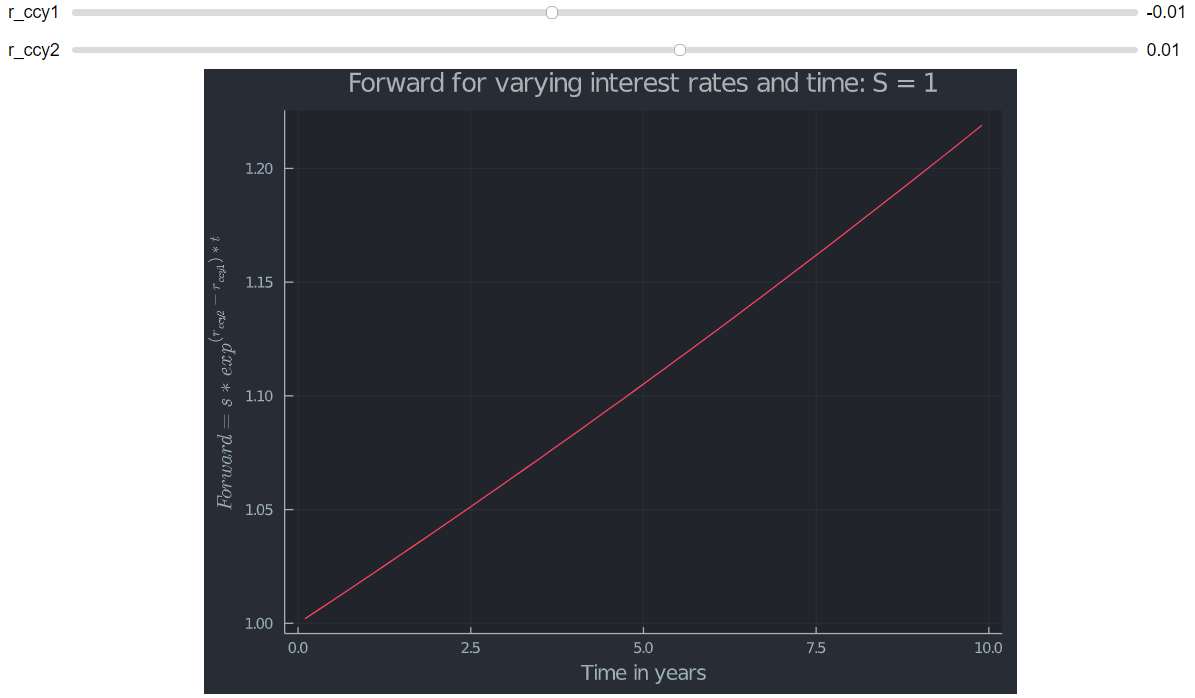 I think Iain Clark is eluding to something similar to the effect of implied vol on delta. IVOL and time are very similar in that sense.

Here, only one of the two "forces" mentioned in the link really matters: The term $$\frac{log(\frac{S}{K})}{\sigma\sqrt t}$$ in d1 converges to 0 as $t \rightarrow \infty$ (the larger vol, the quicker it converges).

When t is very small, you can see that "time and vol adjusted (log) moneyness" is playing a significant role. If t increases, the difference between S and K eventually becomes negligible. 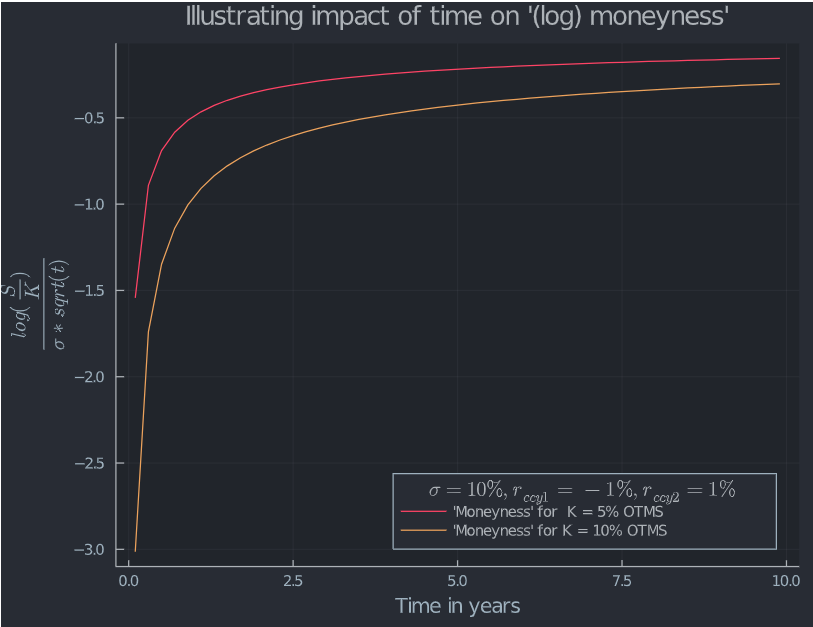 Just as delta is an increasing function in vol, it also grows in time. The probability of ending up in the money can counterintuitively turn zero for large vol and time. This is because the higher σ, the more the global maximum of the probability density function (the mode) shifts towards the lower bound of the lognormal distribution. 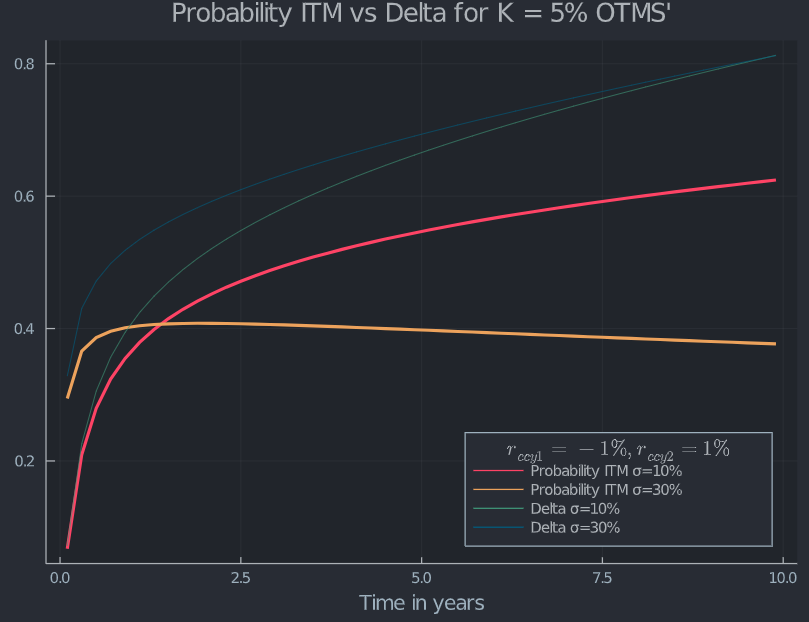 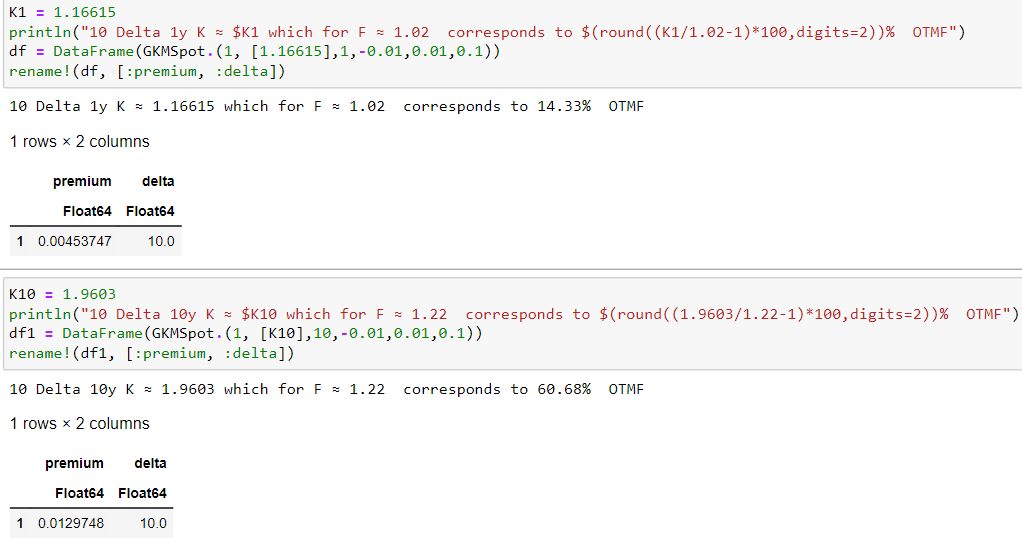 Not the answer you're looking for? Browse other questions tagged options option-pricing fx pricing or ask your own question.

1
Effect of Implied volatility on option delta
3
Is “at the money” referent to the spot or forward price?
0
FX option quotation in interbank market
0
What is delta of an option signaling?
0
implied vol by Delta