I've gone through all the steps to fit a good ARIMA model - I plotted the data, I looked at the ADF tests, I looked at the ACF plot with no AR and MA terms just a constants. I came up with an ARMA(0,1,1) model as the ACF cut off after two lags (the second was negative) and the PACF decayed exponentially from the first order being negative.

The problem is I cannot get rid of a large positive spike at the first order lag in the ACF plot of the residuals once my model is fitted. I've tried increasing the number of MA terms, but the lag doesn't go away and the second term isn't significant. Given it is an MA model, I don't think further orders of differencing are need.

I've coded my model in R

Edit: I've included some of the graphs below. I tested my model with and without a constant, as the constant was not significant, however the AIC was lower with a constant. Theoretically thought, I think no constant makes more sense as I don't think there is a constant average trend. However, excluding the constant (with the argument include.mean=FALSE) doesn't change the ACF or PACF of ther residuals. The code I used to fit the models is:

Below are the graphs - I didn't include the ACF and PACF of the first model becuase there is no difference to that of the second. 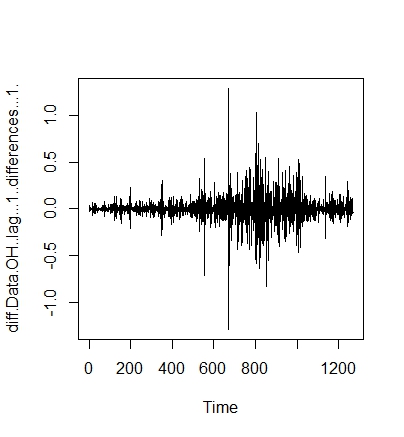 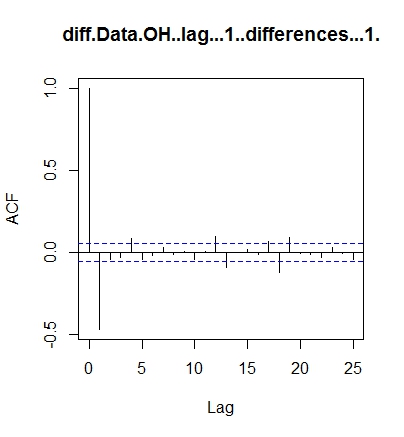 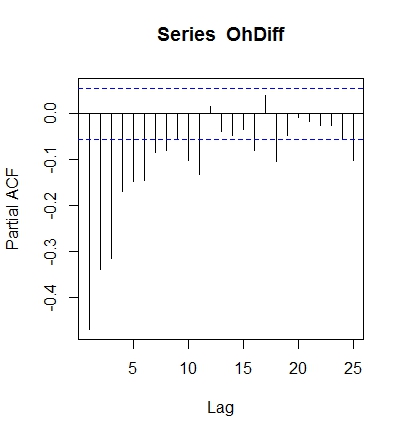 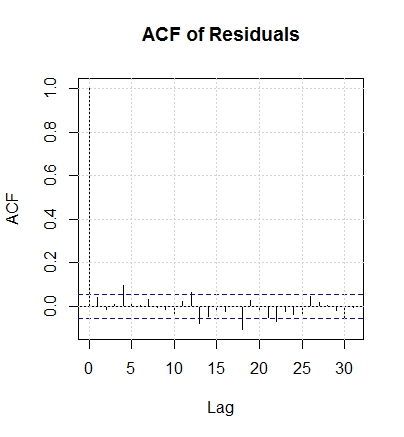 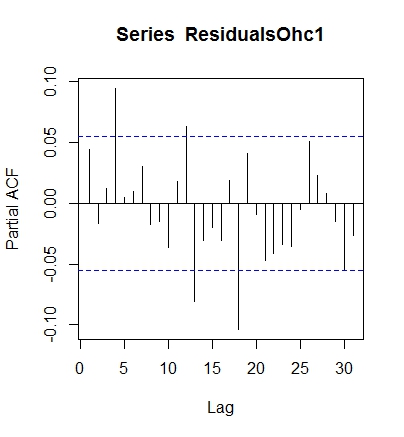 It is a classical misunderstanding, your model is right, you always have a acf equal to one at lag zero (and not one) since if there is no lag acf = covariance(x , x_lag 0) / variance x = variance x / variance x = 1.

So you need to pay attention to the x axis , some software displays ACF starting at lag zero and some others from 1 (which make better sense) .

Not the answer you're looking for? Browse other questions tagged time-series r models forecasting arima or ask your own question.

12
rugarch: Joint estimation leads to different results
2
How to interpret ACF and PACF plots
2
What do I need to do with my data before fitting the ARIMA model?
7
Is it too important that my residuals be normal? I am Using an ARMA/GARCH model
3
Is that a good way to work with the ARMA model?