"However, we believe that studies and our own experience have generally shown that over long measurement periods, the returns of hedged portfolios have been similar to the returns of portfolios that have not been hedged." - TWEEDY, BROWNE FUND INC

However there is clear evidence this is not the case over the short term. Take Japan for example, the two largest ETFs EWJ in red and the currency hedged DXJ in blue. 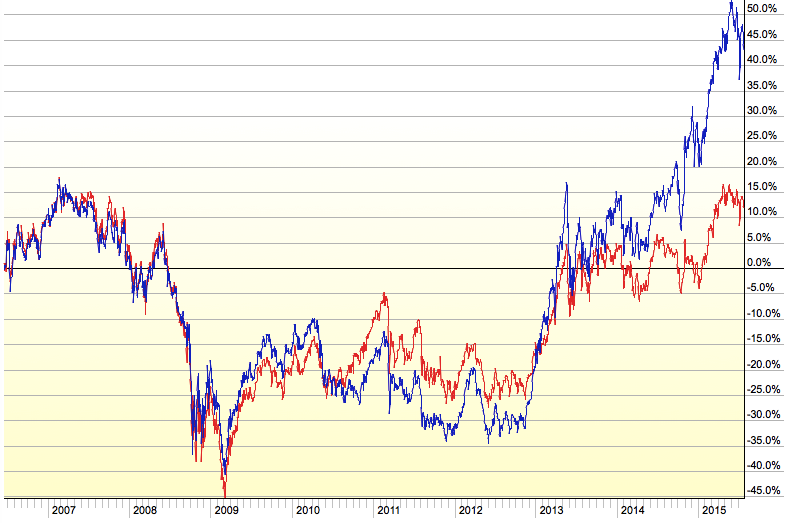 . There are clear periods where one variant is more a preferable investment over the other.

Using interest rates, currency rates and some other metrics how can you decide to use a currency hedged ETF or not? Can the same approach be applied to regional ETFs (EEM, EFA exc.)?

A famous article many years ago was The Free Lunch in Currency Hedging by Andre Perold (1988). It showed that while currency hedging does not change long term returns, it does reduce volatility. Thus, for a mean variance investor, it could be beneficial. This is because FX is not much correlated with equity returns, and thus accepting FX risk adds unnecessary volatility (an argument first made by Solnik in 1974).

An argument for not hedging was made by Froot in 1993 Currency hedging over long horizons: because in the long run you benefit from the purchasing power parity effect in FX. (For example if you are a US investor who has some investments abroad and there is a long period of high inflation at home, the USD will depreciate and your foreign assets will be worth more, providing some inflation protection).

A recent paper on this issue is Schmittman: Currency Hedging for International Portfolios, IMF, June 2010. Again hedging is shown to reduce volatility. But how much depends on what your home currency is.

Whether you should currency hedge or not (from a mean-variance perspective) depends on the relative volatility of the asset and the currency, and on how correlated they are.

Consider an investment in a foreign-denominated asset, with a currency hedge of $w$ (where $w=0$ is unhedged, and $w=1$ is fully hedged).

Therefore the expected return is

and the variance is

It's not unreasonable to assume that the expected return on the currency is zero, in which case you want to know what currency hedge would minimize your total variance. The hedge which minimizes the variance is

i.e. it depends on the ratio of volatilities of the asset and the currency, and on their correlation.

The above assumes that the investor's base currency is USD. We might also consider base currencies which are not USD, e.g. an Australia-domiciled investor considering whether to hedge her exposure to a USD-denominated stock. In this case the long-run correlation between US stocks and the USD/AUD rate is about -50%, so a substantially reduced currency hedge could be appropriate.

GMO recently published on this ("The Case for Not Currency Hedging Foreign Equity Investments: A U.S. Investor’s Perspective" 1). The basic take-away is that anytime the company or ETF's underlying fundamentals should have nothing to do with the trading currency, it could make sense to not hedge. Think, in the simple case, of a company that is US domiciled and has all revenues and costs in USD but happens to trade in GBP on the London Stock Exchange when USDGBP = 1. Then, imagine the scenario where the pound loses half its value to the dollar. Since nothing has changed fundamentally to the underlying asset, then, in theory, the price in nominal terms should double. Hence, your hedge would have made you money while there was no change in the value of the underlying asset - which was not the intended purpose of the trade.

GMO cites the major areas (in equity land) where they would avoid hedging as export-oriented companies, multinationals and commodity producers. They also rightly note that you should always hedge fixed income products as they represent the discounted value of future cash flows in the local currency.

However, I believe the basis for an argument to not hedge comes with some caveats - key among which are the fact that you must assume your portfolio or ETF is globally diversified and that your holding period is significantly long (> 5 years). In reality, it can take some time before the underlying asset prices adjust like in the hypothetical example provided. Hence, when choosing between a currency hedged or non-currency hedged ETF, it makes sense to take a look at the underlying assets as well as your intended holding period. My key takeaway would be as follows: the idea that hedging will reduce the volatility of the portfolio in the shorter term rests on the correlation between the currency and underlying being zero or negative – which must persist for efficacy. Separately, without a long term view and a globally diversified portfolio, it may make little sense to ignore the FX trading risk for each position.

So perhaps you dont need to use rates or FX to determine this (although high FX vol amplifies the risk from making the wrong choice). Instead, analysis of the underlying assets and the markets in which they trade should help to get you the answer. As another example, consider an ETF of Swiss exporters that was hedged against moves in CHF. What happened to this asset in January of 2015 when the SNB abandoned the floor against the EUR? The hedge incurred large losses as the CHF appreciated drastically but the asset got crushed too because people expected swiss stocks to lose if the CHF appreciated beyond the floor. Perhaps in a case like this you would have chosen to invest unhedged.

Not the answer you're looking for? Browse other questions tagged risk fx exposure or ask your own question.

13
Currency Hedged ETFs
1
How to effectively hedge a Fixed-Term deal in a foreign currency?
1
How to hedge two currency positions
2
synthetic currency pair
1
Which currency to hedge a position in FX options?
1
Currency trades