How to calculate yield spread?

I came across this multiple choice question on yield spread and I can't understand why the reasoning for the selected answer is correct.Can you confirm or clarify ?

( emphasis in the text is mine) 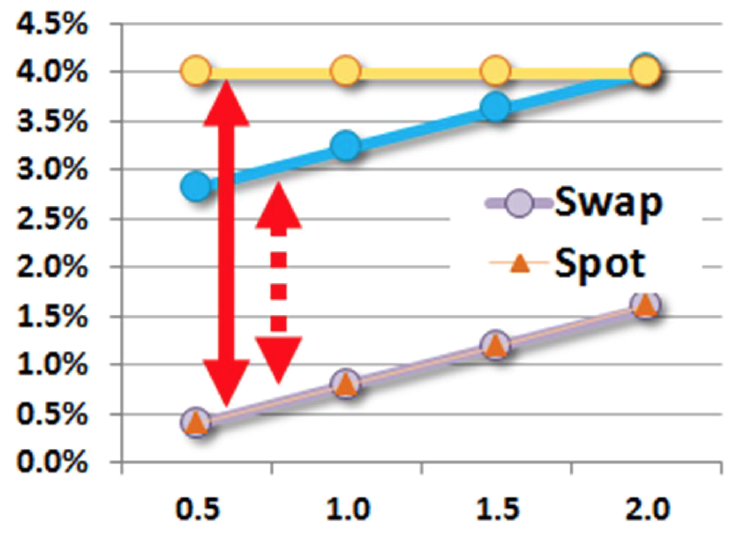 The bond's market price of 103.73 can be computed by discounting its cash flows continuously at 4.0% per annum, which is represented by the flat yellow line. Specifically:

The bond's same market price of $104.73 can also be derived by discounting the same cash flows according to the continuous discount rates given by the the steep blue line. The lower steep line, which shows a rate of 0.40% at six months, is actually two nearby curves: a swap rate curve and nearby spot rate curve.

Each of the following is true about this bond EXCEPT which is false?

b) The yield spread, represented by the solid red vertical arrow, is the difference between 4.0% (yellow line) and 0.40% (spot rate at six months)

c) If the price of the bond decreased due solely to perceived credit risk of bond (without any change in market risk), the upper curves (yellow and blue) would shift up

The given answer is:

B. The yield spread is the "single-point" difference between the yield to maturity (YTM) and the corresponding riskless spot rate; in this case, yield spread ~= 4.0% - 1.61% ~= 2.39%. As the endpoints at year 2.0 are near to each other, this yield is only slightly less than the z-spread of 2.42%, due primarily to the fact that the upper blue line endpoint must necessarily be slightly greater than the 4.0% YTM. If the corresponding riskless swap rate is necessarily interpolated, then this yield spread is an i-spread

Isn't yield spread the difference in yield to maturity between the corporate bond and the risk free bond? In this question, 1.61 is the 2 year spot and not a yield to maturity. What am I missing?

Browse other questions tagged spread yield or ask your own question.

2
Model-implied yield spread on corporate bonds
2
Why is my YTM incorrect? How does accrued interest play into Yield to Maturity?
1
Right expression for the semi-annually compounded credit spreads?
1
How to calculate credit spread from rating
1
Does it make sense to adjust a bond spread for price/coupon effects?