Everyone seems to agree that the option prices predicted by the Black-Merton-Scholes model are inconsistent with what is observed in reality. Still, many people rely on the model by using "the wrong number in the wrong formula to get the right price".

Question. What are some of the most important contradictions that one encounters in quantitative finance? Are there any model-independent inconsistencies? Are some of these apparent paradoxes born more equal than the others (i.e. lead to better models)?

I would like to limit the scope of the question to the contradictions arising in quantitative finance (so the well-documented paradoxes of economics and probability theory such as the St. Petersburg paradox or Allais paradox are deliberately excluded).

Edit (to adress Shane's comment). Hopefully, this question is different in focus and has a slightly more narrow scope than the previous question concerning the most dangerous concepts in quantitative finance work. For instance, using VaR "naively" does not lead to immediate contradictions the way naive application of the BS model does. VaR may be considered inadequate because it seriously underestimates tail risks but it is not self-contradictory per se (please correct me if I'm wrong). Similarly, the EMH in its weaker forms may not be inconsistent with the market reality (at least the opposite has not been demonstrated decisively yet).

In the Interest Rates field there is one paradox in nowadays market conditions (i.e. since the crisis) that is quite tricky to properly understand.

This is the fact that one need several curves to have a correct pricing of simple interest derivatives such as Swap with floating index set to some Libor reference.

Simply and crudely speaking, you have to build first a discount curve (generally based on OIS swap curve) and then use this curve to compute some "adjusted" forward Libor Rate (procedure that I improperly qualify as "forwarding"). The froward Libor Rates used to be calculated by discounting and "forwarding" (sorry for the term) on the very same curve.

This is due to the fact that the once negligeable spreads between OIS and Libor Curves are now large enough to generate significant arbitrage if not properly taken into account.

The paradox comes from the fact that "usual" theory of pricing of linear interest rates derivatives asserts that there can be only one curve for discounting cash flows and "forwarding" floating index references otherwise there is arbitrage.

Moreover the right discount curve can be even more problematic if multicurrency trade are involved (then the collateral currency and rate are important aspect of this topic).

The extension of the multicurve framework to the Risk Neutral Pricing is not easy to implement and many attempts are now published. I will add some references when I have enough time,

Here are a few references on the subject:

The paradoxes that are treated here are:

There is also the so-called Hakansson’s paradox that can be found in Derman's article on dynamic replication.

Levy's Arcsine Law for Brownian motion is quite paradoxical.

If you should guess the amount of time a Brownian path spends above or below zero, which percentage of time would you intuitively assume to be the most probable?

I would have guessed 50:50 above and below should be the most probable case.

The following plot shows the probability distribution for $p$: 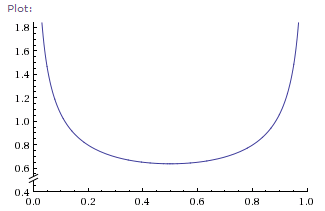 The theorem can be shown using the Feynman-Kac representation theorem.

Parrondo's paradox is a paradox in game theory that describes a losing strategy that wins in the long term. It seems the paradox is only used in textbook examples of finance and has little applications in practice, though.

Not really a paradox, but kind of surprising that delta is not necessarily the derivative of option value with respect to the price of the underlying in the standard MBA one period binomial model.

Suppose the realized return over the period is $R$, the stock price at the beginning is $s$ and can go to either $sd$ or $su$ at the end. We can replicate any payoff function, $f$, by solving two linear equations in two unknowns: $m$, the amount invested in the bond, and $n$, the number of shares of stock to buy.

Question “When we speak about Parrondo's Paradox in relation to stock markets, is there a direct relation between both of them?”

I could say, no, no direct with the original ones, because the probability in the original ones depends from how much capital do you have, then it is a random walk with no uniform probabilities and it is very unlikely to have in the stock market, but it is true that there is something that is no very well know, but it is well known in stock markets, called “volatility pump” you split your inversion in two assets 50:50 and you keep this percentage of the capital in the assets re-balancing our inversion every day , you can relate it to the paradox because you can convert this two loser assets in a winning one. But this idea came from 100 years ago from “Feller” and his work about multiplicative process where the average go to infinitive and the probability density go to cero.

111
What concepts are the most dangerous ones in quantitative finance work?
27
Volatility pumping in practice
3
Introduction to Multiple Curve construction
1
Are European call and put option useful ? [Cox-Ross-Rubinstein model]

9
Does the gamma function have any application in quantitative finance?
12
What tools are used to numerically solve differential equations in Quantitative Finance?
8
What are some quantitative ways to obtain the view confidences in Idzorek's version of Black-Litterman?
6
Is Behavioral Finance relevant to quants?
9
Measure theory in quantitative finance
1
Are densities used in finance square integrable?