"Equilibrium models usually start with assumptions about economic variables and derive a process for the short rate..."

He then states the usual short rate models such as Vasicek's, given by $$ dr = a(b - r)dt + \sigma dW. $$ The "economic" variables to be calibrated are

What exactly is "economic" about these parameters? These seem like purely mechanical parameters, something to be tuned to the happenings of a time series. In fact, here's a time series of the 1-week LIBOR with daily observations - how is a diffusion model supposed to capture these stair step patterns, and then the puttering around zero for the last 6 years? 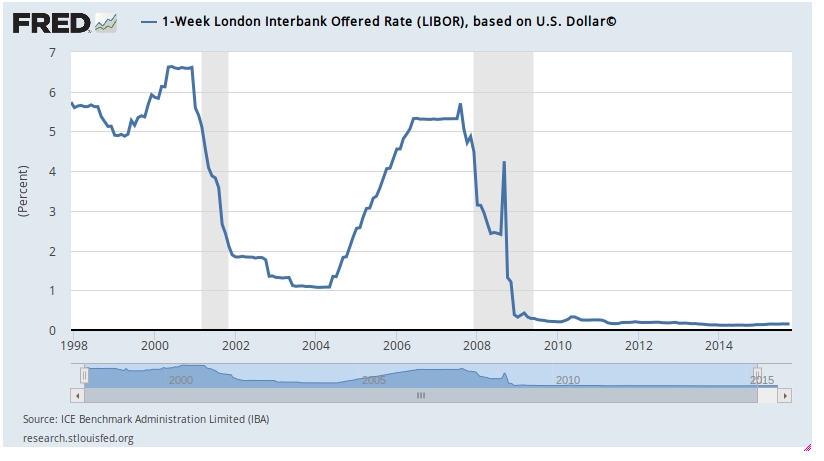 It seems dubious to attempt to calibrate a diffusion model in the hopes of capturing this observed behavior. Rather, I suppose a short rate modeler may decide on "regimes" in the data, and calibrate to only the data he feels best fits the current regime. But again - what "economic" assumptions am I making? Would a prudent modeler not calibrate to the data, and let that speak for itself? Is some senior manager with a PhD in economics supposed to have some insight into the values of the parameters and we use those instead?

My understanding of Hull's statement is different than yours. I think by economic variables he means having extra states in the model. In the Vasicek model there is only one state, namely the short rate itself. So that is the economic variable. But you can also have a model of the form

$$dX_t = f(t,X_t)dt + \sigma(t,X_t)dW_t$$ where $(X_t)_t$ is some vector-valued stochastic process and each component of $X$ represents an economic variable such as inflation, GDP etc. You can then define your short rate to be $r_t = h(t,X_t)$ for some appropriate function $h$.

I share your confusion about this sentence in Hull. The only thing that comes to mind is that they assume short rates are stationary (a mean exists and is finite, and variance is also finite). I.e. they assume interest rates cannot drift off towards infinity over time, implying that if you write the short rate as an autoregressive process the coefficients should sum to <1 in absolute value. The implication of the time series having this property is that there is some economic force that will act to pull short rates back towards the long run mean if they deviate from it (e.g. buildup of inflationary pressures under low rates causing eventual rate rises). I acknowledge this is all rather abstract and hand-wavy.