Foresight bias means we tend to over estimate the American option value. This we observe in other areas of statistics - e.g. in sample test almost always gives better prediction than out of sample tests in linear regression models.

My question is: is it known (theoretically or empirically) such bias is reduced by increasing sample size in least square monte carlo algorithm?

I have done some simulation myself. From my simulation, at least for the models I have worked on, the answer seems to be yes.

Presumably this is simply because bigger sample tends to mean the sampling distribution of the estimator has smaller variance blah blah blah?

Is there any theoretical results or empirical studies on this?

This study seems to be on point: http://christian-fries.de/finmath/foresightbias/Fries_ForesightBias.pdf

Recently, I co-authored a paper (Arxiv | SSRN) on the issue.

You can efficiently remove the look-ahead bias (a.k.a., foresight bias) using leave-out-out-cross-validation (LOOCV) method. Basically, the procedure is (i) take out one sample ,(ii) run regression using the rest, (iii) get the prediction on the removed sample, and (iv) repeat the process for each sample. This way, you avoid the in-sample overfitting. Luckily for linear regression, we can get the adjusted prediction analytically without running the regression as many times as the sample size.

Transitional trick to remove the look-ahead bias is to run an independent simulation for out-of-sample valuation. With LOOCV trick, this is not necessary.

Why look-ahead bias happens in Longstaff-Schwartz algorithm and how LOOCV is applied is pretty much illustrated in one figure in the paper. 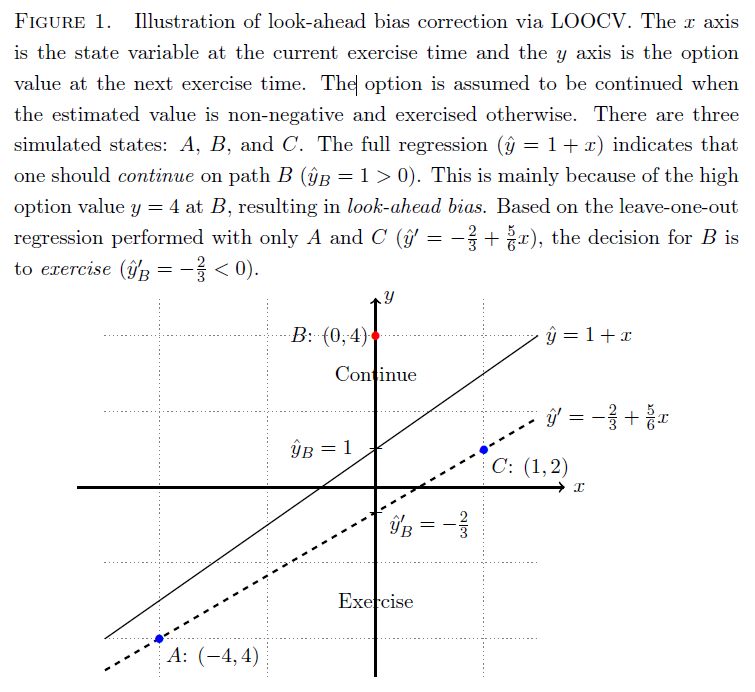 We also show that the amount of the look-ahead bias (LOOCV also enables us to measure it) is proportional to $M/N$, where $M$ is the number of regression variables and $N$ is the sample size (@Lost1, you're right that foresight bias is reduced by increasing sample size $N$). It intuitively makes sense because the overfitting in linear regression increases with $M$.