Are there “live” uses of the Generalized Method of Moments or are they all academic?

I see the Generalized Method of Moments suggested in numerous academic papers as a way to calibrate stochastic volatility models. However, any decent trading shop is going to calibrate to observable option prices instead.

Are there any places that have used GMM in an actual trading context, say in some market where historical time series are obtainable and derivatives prices unavailable?

GMM method is a powerful method to calibrate historically, only. Also, the historical Calibration is used in the banking industry for forecast an asset’s performances and not for replicating them.

Mathematically, it's known that historical vs options calibration is equivalent to observing an asset through two different probabilities (historical vs the neutral one). This is why you will observe Apple's trend around $\mu \approx 45\% $ under the historical proba instead of the lower interest rate in the neutral world. 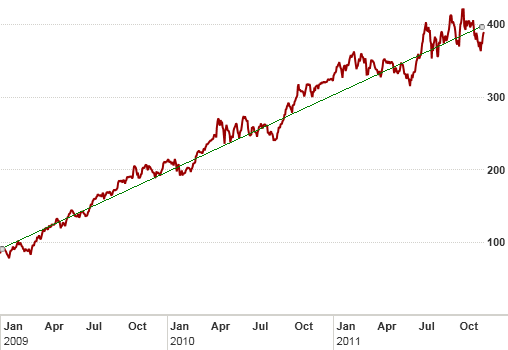 For an insight on what could be done with the two probabilities see the article "P" versus "Q" of Attilio Meucci.

There are some articles who are interested in linking the two probabilities, i.e. the historical and the neutral one. The big advantage of this approach is indubitably the great amount of historical data which would provide an appreciable robustness to the neutral calibration.

But at my knowledge this is so far not used in the banking industry for reasons linked to the change of probability (weird assumptions on the risk premia) and the resulting change of model.

Not the answer you're looking for? Browse other questions tagged stochastic-volatility calibration or ask your own question.