Edit: The questions in other words,

You can take a look at figure 1 from Egloff Leippold Wu (2012). They show for the aggregate market different shapes of the term-structure of IV (measured as the Variance Swap Rate) at different points in time. But the pattern is also true for individual stocks. 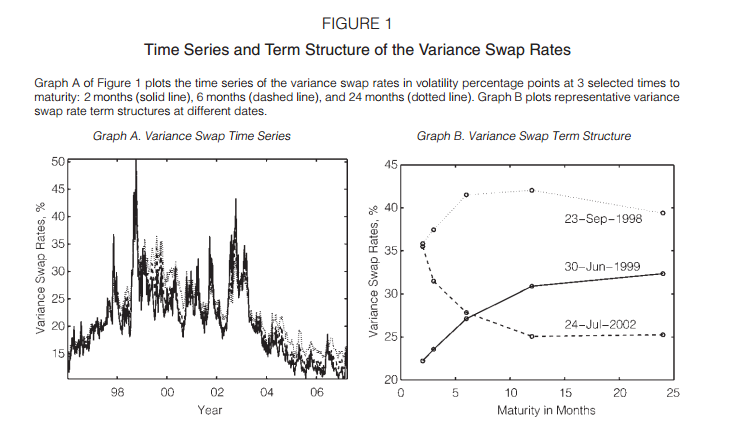 Implied vol is (very loosely speaking) the risk neutral expectation of the realized volatility over the life of the option.

A 10Y implied vol is an average over 10 years, and therefore is relatively immune to short term spikes. It is slowly varying, relative to a 1M vol which only captures spikes in short term sentiment.

When the Vix (which is short term) went to over 150% in the crisis of 2008-9, you would not expect it to last for many months. Therefore the longer term vols did not spike in that extent.

It is essentially the same logic that applies to yield curves, where the 30Y rate moves in a much less volatile than the 1Y rate. The former reflects long term fundamentals, while the latter assesses the next business cycle and central bank responses.

Implied vol skews are much more pronounced for short term options (when you have moneyness on the x-axis). After all, a 10% move is big over a day or a week, but not a big deal over two years. Also, just due to the law of large numbers distributions become more Gaussian in the long run, and the smile flattens out somewhat.

In reality every stock, index or FX will exhibit a mix of moneyness and strike strickiness. As a rule of thumb, I would say the sticky strike dominates over short term moves for equities.

The above move (or not move) the skew left and right. But you also have:

This is my toy understanding and decomposition: spot/vol correlation (up/down) and stickiness (left/right). It is not uncommon for people to confuse left/right for up/down and conclude that there more negative spot/vol correlation than there really is. Especially when they use short term vols like the Vix.

Just a small addition to excellent responses above - traders' rule of thumb is that vol term structure moves proportional to inverse sqrt of time to expiration.

Not the answer you're looking for? Browse other questions tagged implied-volatility earnings or ask your own question.

1
Why is the term structure of the implied volatility surface non-monotonic?