When looking at historical data (index or stock), one can find all 1-day differences/movements, all 2-day, all 3-day etc and graph the extremes of each of these. This gives two line graphs forming a channel/fan showing the historically maximum price fluctuations for being in this stock for 1 day, 2 days etc. It is quite an instructive graph showing how risk tends to narrow over time. See example where MSCI World (15 years of monthly closes) are used to show the historical extreme outliers (blue) and also the 90% band (green - which one might think of as a historical confidence interval of sorts). The two lines are just 2% and 7% interest rates for comparison. I thought of this myself, but I have surely not found something new. So what is this graph or method called, where can I read more about it and how can I approach quantifying what it shows?

Sounds a little bit similar to variance ratio - the seminal paper of which was Lo, MacKinlay 1988, however that deals with variance, not differences of extrema.

That you find "risk" narrows over time is odd, given that $Var[x + y] = Var[x] + Var[y]$ for independent variables $x \& y$, and one could look at days as being independent, and similarly distributed (not identical as mean and variance can change) for typical stock time series (at least that is the random walk hypothesis). However, if you were, for example, dealing with a time series that exhibited mean reversion or auto-correlation, this could affect it slightly.

I think it might also depend on your methodology - am not entirely sure what "graph the extremes of each of these" means. It seems to me that the min and max should be typically moving apart from each other, if slowly. If dividing the differences by the number of days, then yes it will surely converge, as the probability of having found a (relatively random) series with n positive (or negative) days as large (or small) as the max (or min) move becomes negligible quite quickly. ;-)

-- Edit -- It looks like returns - is it? (percentage or log?) I think perhaps you are graphing the min/max of the n-day returns distribution? If that's a correct assumption it seems fair to me to say it's the graph of the best or worst one could have done over each holding period, for the entire data set (the time axis of 2016-2031 is presumably an extrapolation of $1000 from now?)

How does it compare to what might have happened - or what was likely? Good question. On the basis of some (only 500) Monte Carlo simulations, presuming lognormal returns, similar drift to the stock, and constant volatility similar to the historical, I did this for AAPL over a 15 year period for 1-500 day returns.

Mins & Maxes shows the min & max values that the monte-carlo sims took, Averages shows the average values that the monte-carlo took. One can see that AAPL was within the range of Monte-Carlo sim (min/max), but a little more dispersed than the 'average'. What conclusions can one draw? I think it's a reasonably simple way to show what was described above - the best or worst one would expect to do over a period? Beyond that I don't know. If it were significantly different from monte-carlo, one might wonder, but then it becomes a statistical question about the likelihood of it being within a certain range. 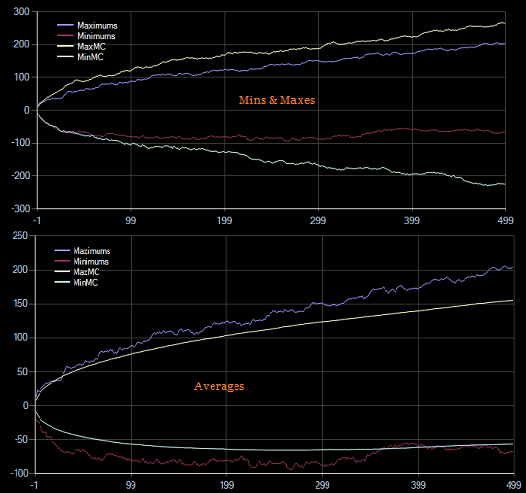 If you look at longer time returns (monthly or weekly as compared to daily) then these can be seen as the sum of daily (log-)returns: $$ r^w = \sum r_1^d + \cdots r_5^d. $$ It is in general not true that the $r_i$ are iid because they are not independent. If they were then $r_i^2$ would be iid too and we know that volatility clusters. Even without independence we see that variance roughly scales with time.

The thing that you might be seeing here is aggregational Gaussianity (see e.g. here in a paper by Rogers and Zhang. This means that increasing the time scale returns look more and more Gaussian. This implies that excess kurtosis gets smaller and skewness too. This leads too a distribution with less "suprises" and in this definition less risk.

Not the answer you're looking for? Browse other questions tagged market-data brownian-motion charts historical or ask your own question.