As I mentioned above, I am not sure what the variable $r$ is. If we ignore that, or assume the questioner wanted to say its the risk free interest rate, then it has no effect on the number of paths.

We need to subtract from this the number of paths that cross \$3125 and yet end up on \$2500. For each such path, there is one that passes through \$3125 at the same place but then is reflected across the line \$3125 to end up on \$3906.25. In other words the reflected path has a net 6 up movements. An example of this method is shown below. The numbers used are for a different problem. 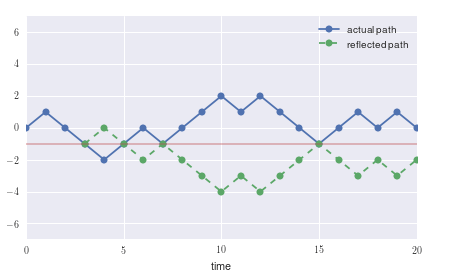 So the number of such paths is $\phantom{a}^{50} C_{28}$. However, recall these are the paths we need to exclude as they crossed the barrier.

This is not the same as that asked in the question because of the difference in the first term but I suspect that is a typo.

it is then easy to think about Pascal triangle and to look for a solution like $E(n,m)=C(n,a \times n + b \times m)$

Not the answer you're looking for? Browse other questions tagged option-pricing binomial-tree random-walk binary-options barrier or ask your own question.

1
How to price an option on a dividend-paying stock using the binomial model?
4
How to value a Binary Option using market data?
2
pricing american calls on non dividend paying stocks
3
Why my implementation of CRR model does not converge?
3
Price Down and In Barrier Option Using Local Vol and Monte Carlo
0
Is the moneyness of a barrier option based on the strike value or the barrier when mapping to a volatility surface?