Can you fully hedge an option in the presence of counterparty risk?

EDIT: The question is about options in general, not just the exchange-traded ones. BS model is used to price FX options, or -- in a modified form known as "Black 1976" -- IR swaptions. They're (IR swaptions at least) OTC instruments and thus would not benefit from the central clearing mechanisms.

Options are actually some of the least susceptible securities to the adverse impact of counterparty risk. I refer to listed options, such as those cleared through the OCC (Options Commodity Clearinghouse) in Chicago, IL. The OCC is a true central clearing counterparty (CCC) because it bears all default risk, by distributing it evenly among its members. The default risk is distributed because all members "pay in" (provide collateral), mitigating the aggregate risk exposure in the event of a member default.

What if they don't want to pay? you may ask. Members are assessed a yearly fee to belong to the clearinghouse, which maintains these funds if needed (it is called the "insolvency fund"). Furthermore, each transaction is assessed a short-term collateral tithe, until the trade clears.

I couldn't find an example chart from the OCC, but here is one for the NSCC (National Securities Clearing Corp, now Depository Trust, DTCC), which is the other major central clearing counterparty in the U.S.A. NSCC/ DTCC acts as the CCC for listed equities, mutual funds, bonds, government securities etc. The OCC acts similarly, but for options. 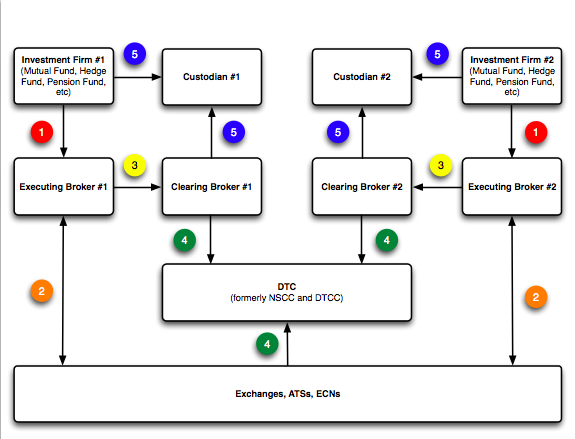 Regarding the question, the counterparty risk IS negligible as far as the risk to both parties in the transaction, the buyer and seller of the option. *** If the option is listed, the clearinghouse is in place to cover any default.

In the instance of non-CCC, there are the intermediate clearing brokers as I described above. The taxpayer is never liable here (that concern was expressed in a comment to another answer). Other than a situation of complete financial collapse, the effect of counterparty risk will not be an issue for traders. The "buck stops" with the clearinghouses and the clearing brokers.

*** The clearinghouse is adequately collateralized. It includes both an annual fee for members, plus a daily collateral margin based on each transaction cleared. There is also a secondary insolvency fund as back up, for coverage in the event of a catastrophic risk scenario.

Keep in mind that most futures, equity, and index options, at least, are traded on exchanges where the counterparty risk is so tiny as to be negligible.

In general, adding extra variables like this fails to invalidate the model. For example, the fact that interest rates or volatilities are not constant just ends up leading to an extended model with extra stochastic factors (and hedges) corresponding to the extra terms.

Counterparty risk is special, however, since it moves the price in opposite directions for the two entities making the trade. That is to say, if BofA is trading an in-the-money swap with Goldman, then

Contrast this with the case of stochastic interest rates, where both parties can at least theoretically come to a consensus about the effect on the value of future cashflows.

In practice, for options, only one side of this conundrum is relevant. For example if Goldman is buying an option from BofA for cash upfront, then BofA has no counterparty concerns about the deal. Goldman still wants to pay less due to the credit risk of course, while from BofA's point of view the credit risk is meaningless.

The result of all this is that counterparty risk is an unavoidable error in the model. I would not go so far as to say this risk "invalidates" it. After all even the existence of quoted spreads on the underyling theoretically "invalidates" the model.

What it does mean is that trades happen only in cases where the counterparty risk is roughly the size of the option's bid/offer spread, or less. Any more risk than that and BofA will be unwilling to accept such a large haircut, and Goldman will take its business elsewhere.

A common way to reduce the risk all around is in the use of margin accounts. For example, Goldman obviously cares little about the BofA counterparty risk if the option looks valueless. If the option becomes valuable, then Goldman can demand that BofA keep some money on deposit as a guarantee they will make good on the payments. So long as any bankruptcy by BofA is sufficiently slow to evolve, the margin account updates will have grown to entirely cover the option value by the time default actually occurs.

The margin accounts are the reason exchanges are willing to let members sell options, despite the obviously greater risk of any individual member's default.

Not the answer you're looking for? Browse other questions tagged options hedging counterparty-risk or ask your own question.