How was money made from bond yield convergence?

I'm currently reading a book which provides examples of how hedge funds employed a global macro trading strategy in the past to generate significant returns. Once such example is the convergence of European nations' government bond yields in the lead up to the launch of the Euro (monetary union). 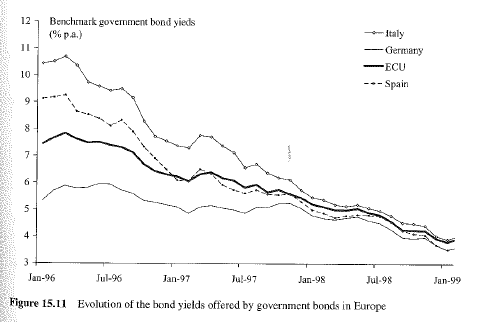 The image shows the movements of government yields in the lead up to the 99 Euro (note that pre the Euro, German debt was considered the benchmark, and all other national debt was a spread above German yields).

The book states that Hedge Funds employed a strategy of going long in Italian/Spanish debt, and going short in German debt - and that these two strategies paid off very well as convergence occurred. Furthermore, it states that the gains from such convergence trades were large because they did them via interbank currency swaps.

My question is two fold:

b) How did the use of currency swaps somewhat magnify the profits made? The book states that: "If the interest rate spread narrows before the contract maturity date, the investor effectively books a profit equal to the change in the spread times the number of months to maturity".

This is the trade that made LTCM famous.

Italian yields were higher than German yields. The prediction was that yields of Italian bonds would become equal to those of German bunds. Since prices move inversely to yields the trade is to be Long Italian Bonds and Short Bunds. You could skip the shorting of bunds (and only be long Italian bonds) but: (1) That would not be a "convergence trade", (2) You remove some risk by being short bunds (for example what happens if the yields converge by having the Bund yield rise towards the Italian yield? In that case you would not make money if you forgot to short the Bunds).

For the second part: The bond trade amounts to a bet on convergence of long term bond rates (eg. 10 year rates), while the currency swap can be seen as an additional bet on the convergence of short term rates, since currency swaps are priced based on for example 3 months or 6 month rates. (In fact an FX swap is identical to being long a 3 month ZCB in one currency and short another 3 month ZCB in another currency). And these short term rates converged as well. (but of course the biggest impact of yield changes, i.e. the biggest duration, is for long term bonds).

Qn: How did the use of currency swaps somewhat magnify the profits made?

The key to interest rate derivative positions is no notional is posted, and effectively a margin (the net present value, discounted over the derivative lifetime at prevailing money market rate) call is, and thus easy leverage.

In the scenario described above, as rates lowered the the NPV remained in the rcvr's favour, generating a positive windfall and easing leverage.

Not the answer you're looking for? Browse other questions tagged fixed-income bond-yields or ask your own question.

4
Pricing a bond contract from the yield curve
6
How to calculate US treasury total return from yield?
2
Bank discount yield and money market yield
3
What does the yield spread between an inflation linked treasury bond (TIPS) and a comparable treasury bond represent?
4
How do I calculate yield from a bond futures contract?
0
Positive bond returns and positive yield change in the same month
2
Corporate Bond Yield Curve
1
Credit Spreads and Relative Value : floating vs fixed bond
0
Bond Overall Return vs Yield to Maturity