When ATM implied volatility is higher than OTM put and call I believe that the volatility smile is no longer arbitrage free? Why is that?

On the other hand, when ATM implied volatility is lower than OTM put and call is the volatility smile always arbitrage free? Why is that?

I generally agree with @dm63's answer: A convex (concave) smile around the forward usually indicates and leptokurtic (platykurtic) implied risk-neutral probability density. Both situations can or cannot admit arbitrage. I provide you with two counterexamples to your statements.

A volatility smile that is concave around the forward does not necessarily represent an arbitrage.

Concave smiles often arise when a significant jump with a predictable time of occurrence is priced in. This is often the case for single stocks around quarterly earnings announcements or for indices around macro events such as elections, referendums or rate decisions.

Consider for example an underlying asset that does not move except for by a single jump. Let $X_t = \ln \left( S_t / S_0 \right)$ and define

Here, the jump time $t_J$ is known and has the random jump size $Y$. $\gamma$ is a deterministic drift that is chosen such that the discounted asset prices is a martingale under the risk-neutral probability measure $\mathbb{P}^*$. It is given by

where $\phi_Y(\omega)$ is the characteristic function of $Y$ and $\delta$ is the Dirac delta function. 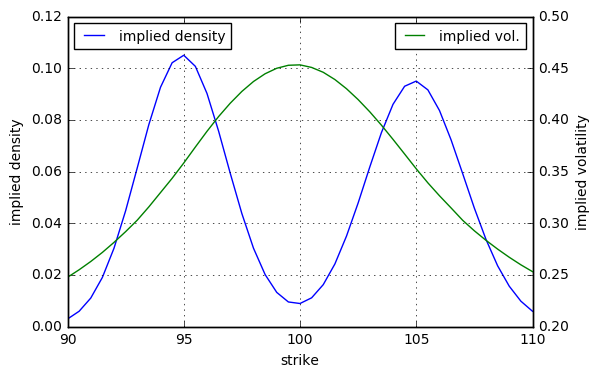 In practice, you would consider more complex/realistic underlying dynamics such as e.g. a stochastic volatility and/or jump-diffusion model. 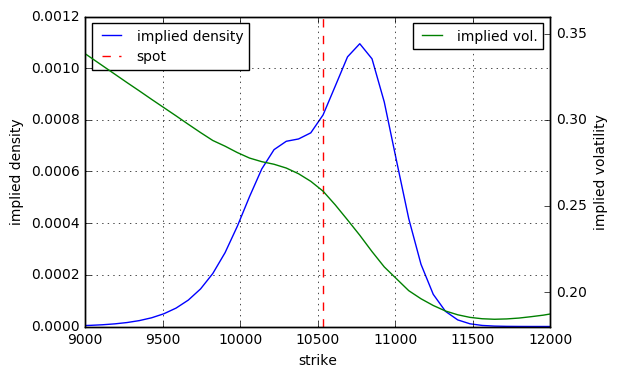 A volatility smile that is convex around the forward is not necessarily arbitrage-free.

A few popular implied volatility smile parametrizations are not arbitrage-free for their full parameter range.

Roper (2010) for example shows that the so-called "arbitrage free" original SVI parametrization due to Gatheral (2004) is actually not arbitrage free, even for realistic parameter combinations; see Figures 1 and 2 in his paper.

Another example is the Hagan et al. (2002) SABR parametrization, which is known to generate negative densities on the far downside strikes.

For both examples, there exists a vast body of literature that aims at providing arbitrage-free alternative formulations.

Not the answer you're looking for? Browse other questions tagged implied-volatility no-arbitrage-theory volatility-smile or ask your own question.

4
What interpretation can I derive from an inverted volatility surface?
3
Seeking a model to Isolate a stock option's Implied Volatility related to a specific event
2
Bimodal option pricing based on P.D.F
1
Extreme AUDJPY FX vols

8
Concave volatility smile
7
Intuitive Explanation for Volatility Smile for Equity
7
Why is there greater demand for OTM and ITM options than for ATM options?
9
Implied Vol Smile: from Calls, Puts or Both?
1
Non-Trivial ATM Volatility in Vol smile construction from Market data on US Equities
4
Is the volatility smile a thing of the past?
3
Calibration of a volatility smile model on a partial smile