Note - These are my interpretations of options pricing and assumptions going into this question. Please feel free to comment on them or correct me if I am off.

Option Implied Volatility varies based on the perceived risks in the market affecting the price of the options. Roughly interpreted this way, as perceived risks get higher, sellers will raise the price at which they are willing to execute a trade to compensate themselves for the risks they are taking. Based on the options pricing model you are using this can be interpreted as the Implied Volatility of future price movements.

These risks can be broken down into broad categories. In this case, I am going to use the following categories to frame the question; Systemic Risk and Point Risk.

Point Risk is more specific. In this case, I am referring to a specific known risk at a point in time. An earnings announcement is a perfect example of this. We know almost exactly when the earnings release will happen but since the information is unknown there is a risk of a shock to the stock price.

The concept of a Point Risk can be extended to anything that could have an effect on the volatility of an underlying's price within a definable period of time. Examples could include Fed Rate announcements, FDA approvals, Industry Events, etc...

The Question: What model gives me the ability to determine the portion of an option's implied volatility that can be attributed to a known Point Risk vs what is attributed to more general Systemic Risk?

My goal is to be able to analyze option IV around an event and determine if the market is perceiving more or less risk from that event compared to previous similar events.

The problem is that IV can go up or down separate from the event itself. I can't just compare the IV between two different events because other factors could be driving up the Systemic Risk portion of the IV independent of the Point Risk.

I can look at options that expire before the event or expirations far after the event but even those contain some level of event risk bias.

Does anyone have suggestions for approaching this problem or know of research that relates to the concepts?

My preference is to have a model that has some form of explanatory ability rather than a non-parametric converged solution like a Hidden Markov Model or Neural Net solution.

For stocks, here are some possibilities:

(ii) you could take the VIX, scaled by the beta of your specific stock, as a measure of underlying volatility

(iii) you could build a model which allows for the volatility for each day to be specified. You would then give each day a label as follows: earnings announcement, Fed announcement, election day, and no event. (as many specific events as you like). Using a least squares approach, or just using educated guesswork, you then solve for the volatility of each type of day such that the implied volatility of any observable option is respected. For example, if a 1 month option on the stock is trading at 26% vol, then the sum of the squares of the percent moves on all the constituent days must add up to 26^2.

The approach (iii) is the type of model used by short dated option traders on the street.

Let's first assume that the "base" dynamics of the asset (that is at all times except for the event) follow a geometric Brownian motion (GBM) with diffusion coefficient $\sigma$. The jump itself is a normally distributed random variable $Z \sim \mathcal{N} \left( -\frac{1}{2} \xi^2, \xi^2 \right)$. Note that we cannot specify the mean jump size as it is implicitly imposed by the martingale property of the discounted asset price process. Let $X_t = \ln \left( S_t / S_0 \right)$ be the logarithmic return process. Then

where $t_\text{J}$ is the jump time. It follows that $X_t$ is normally distributed with

Thus, the implied volatility for an option with expiry in $T$ is given by 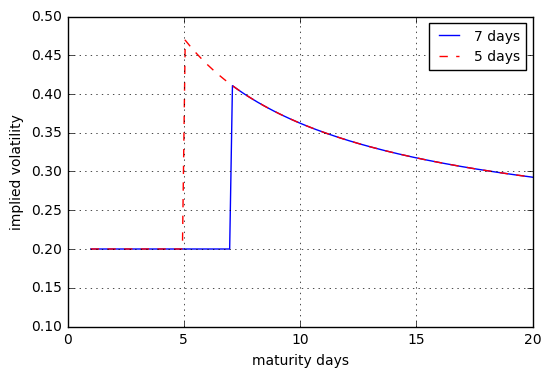 This suggests two approaches to calibrate the model:

In each case, we use the above expression for $\sigma^{\text{IV}}$ and calibrate the parameters $\sigma$ and $\xi$ to match the inputs, e.g. in a least-squares sense. Of course we can also mix both methods.

In the presence of an implied volatility smile, we could try and apply the above approach to the at-the-money volatilities. However, even then the assumption of a flat base term structure is usually too restrictive and we might consider using a parametrization for $\sigma(t)$.

In order to simultaneously calibrate our model to the cross section of all listed options, we need to use more complex base dynamics. Let the logarithmic return process be defined as

Here $Y$ is the base process, $Z$ is the random jump size and $\phi_{Y_t}(\omega)$ and $\phi_Z(\omega)$ are the corresponding characteristic functions. We can then compute European options prices using the same Fourier inversion methods that we use for our base dynamics anyways.

Here is an example: Assume that $Y$ is driven by a Bates (1996) stochastic volatility and jump diffusion process of the form 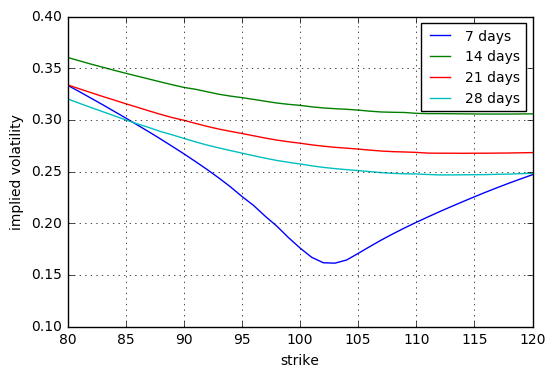 So as far as I can tell, there would only be one methodology that could solve this. You are trying to solve two distinct things and they use the same methodology. If $r$ is some measure of locally observed volatility or risk both in the past and to be predicted in the future, $\sigma$ is the true parameter in nature, $I$ is general information, and $E$ is event specific information, then I believe you are forced by the nature of your description into a Bayesian methodology.

The reason is that while there may be methods to model $\sigma_t$ in Frequentist and Likelihoodist methodologies, there is no methodology to model realizations, which is a different type of question. Fortunately, there are Bayesian solutions.

First, I want to point out that an event is nothing more than data, but you and possibly the public see it as significant. In other words, you do not consider a hurricane in the same category as rain. The drops of water are essentially the same, if maybe a bit more energetic in a hurricane than in a gentle spring drizzle. There is a second issue as well. An inchoate risk stops being a risk once it is realized, then it is a fact. It might be an unpleasant fact, but it is now a certainty. Markets may not be responding to a change in risk, but a change in certainty. It may be that $\sigma$ fell once some event was realized, but $\mu$ not only changed, but it is now more certain than ever.

Nonetheless, Bayesian methods allow all kinds of things to be parameters other than just centers of location, scale, skew and so forth. Ben Roethlisberger could be a parameter. He would have various parameters associated with him as well, such as quarterback, completions, Steelers, age and so on, but they may be combined in him in a unique manner making him distinct. As long as you can make a model that is sensible, Bayesian methods will be glad to assist you. If you were playing fantasy football, you could make each player a parameter that is itself a unique configuration of parameters, which are part of a larger system that has parameters. If it were not for the dimensionality, it is probably a solvable problem.

In addition, you do not have to collect the data on a variable to include it in a model. There is a great article on modeling three sided coins (heads, tails, sides) and two of those models include variables for which no data was captured. See http://statweb.stanford.edu/~owen/courses/306a/threesidedcoin_amstat.pdf

The article also provides an intermediate view of how to test various competing models to remove bad ones.

What you are wanting to do is predict local volatility given information, event information (which could just be a jump again see the article) and the parameters.

You want to know $\Pr(r|IE\sigma\mu{t})$. That is solved through the Bayesian predictive distribution. It will provide you a distribution of the future sample space of realizations of $r$. The reason you cannot do this in Frequentist methods is the same reason people misinterpret confidence intervals. One of the features of the edges of confidence intervals is that they are random and that smaller intervals are not intrinsically better than wide ones. People mistake interval size for precision. It is a similar type of problem.

You can also do sensitivity analysis between the effects of $I$ and $E$ on price movements. Believe it or not there is a paper on this in 1941 that John Maynard Keynes spent some time commenting on. It is by Landon, but you will not want to read it. Instead, pick up the generalized form in ET Jaynes book Probability: The Language of Science. It is a bit polemic and it won't work for your specific application, but it will give you the thinking. Landon was concerned with signal and noise in telecommunication lines.

Personally, I am opposed to this category of thinking and models, as a disclosure. Nonetheless, what you are wanting to do is ambitious. In the event you have not heard of the Bayesian predictive distribution, I will give a very brief math tutorial.

First, lets imagine there is a future sample space $\chi$, and historic sample space $X$ and an observed sample $x$. There is also a parameter space $\Theta$ and a parameter $\theta$. Both could be vectors in vector spaces.

Bayes theorem, for purposes of analysis, is made up of four parts. The first part is called the prior distribution, almost always shortened to the "prior." It will be denoted $\pi(\theta)$ and contains everything you professionally know about the parameter prior to looking at the sample. If you know it cannot be negative, then you assign a zero probability over the negative numbers. If you know it cannot be 5,000,000% per year every year, then you either assign a zero percent probability or some very narrow tail of a probability. And so on with each parameter. You encode, as best you can, the existing body of knowledge on the topic. This has two advantages.

It avoids wasting information and it can normalize your sample, if by chance, you grabbed the weird sample. If you are completely ignorant as to the value of $\theta$ then you would assign an "ignorance" prior, that is a formula that is designed to mimic ignorance in a probabilistic manner. The prior is everything you know about the problem right now.

The second portion is the likelihood. It is the probability of observing the data you actually observed at a specific possible value or set of values for the parameter or vector of parameters. It is denoted $\mathcal{L}(x|\theta)$. This is your model. The numerator is the product of the prior and the likelihood. It is a density so this calculation is repeated over every possible value of the parameter, that is for all $\theta\in\Theta$.

The third portion is called the evidence. The numerator is summed over the entire parameter space. You are adding up every possible explanation of the data you saw weighted for its prior probability. It is written as $\int_{\theta\in\Theta}\mathcal{L}(x|\theta)\pi(\theta)\mathrm{d}\theta$.

The Bayesian predictive distribution begins with the posterior distribution. It would predict the probability of $\tilde{x}$ for all $\tilde{x}\in\chi$.

You are wanting to find $\Pr(\tilde{r})$. Even though I am opposed to this class of models, best of wishes and good luck. Your findings may help others.

Not the answer you're looking for? Browse other questions tagged option-pricing risk implied-volatility or ask your own question.