Shape and geometry of the yield curve

Let the initial yield curve $T\mapsto y(0,T)$ be given for a term structure family of bonds $B(0,T)$ having different maturities. I am trying to figure out the geometric properties of the yield curve. Apparently, I cannot find any reference where the following questions are addressed in an exhaustive manner. For example: consider a fairly long interval $[0, T^*]$ (say, $T^*$ of the order of several years). Then:

You can't make any concrete statements about the monotonicity, convexity or even sign of the yield curve.

In general, the shape of the yield curve is a combination of

A. Expectations about future interest rate movements (including changes in the level and slope of the curve).

B. Risk premiums (longer-dated bonds are more risky, so yields are generally higher to compensate for the additional risk).

C. Supply and demand, both at the macro level (e.g. Pension funds may demand longer terms bonds, pushing down yields at the long end) and micro scale (reflecting e.g. preferences for on the run vs. off the run bonds, or deliverability into futures contracts).

D. Convexity. Longer term bonds have a convexity advantage, and so their yields may be lower to compensate for this.

I will try to return to this answer with more mathematical detail later!

Here's the mathematical detail that I promised. A good source for this information (and much more) is the seven-part series "Understanding the Yield Curve" by Antti Ilmanen. This was a series published by Salomon Brothers in the 1990s. I don't know a good source for it, but you can reasonably easily find PDF copies available for download.

The scenario we'll work in is a market for zero coupon bonds, with one bond issued for each year $n = 1, \dots, N$. The yield curve we'll compute will be the annually compounded zero coupon curve - from this curve you can compute the par yield curve for coupon-paying bonds, and it's also easy to generalize to frequencies shorter than 1 year by assuming that $n$ stands for the number of quarters, months or whatever.

The shortest holding period we'll consider is one year. The price of a one year zero is $p_1$, and the one year yield is defined by

We assume that there is zero probability of default, so this is a risk-free investment - if you invest $p_1$ now, you are guaranteed to get back 1 in a year's time.

The price of an $n$-year zero defines the $n$-year yield,

It's also very useful to define the forward rates $f_{m,n}$ which are the implied rates for investment between years $m$ and $n$. You can lock in this rate by shorting an $m$-year bond and buying $p_m/p_n$ of an $n$-year bond, which costs you nothing up front. If you compound for $m$ years at $y_m$ and a further $n-m$ years at $f_{m,n}$ this must be the same as compounding for $n$ years at $y_n$, so you have

Now we need to think about return on holding an $n$ year bond for one year. By the end of the year, it has become an $(n-1)$ year bond, and it should be priced using the $(n-1)$ year yield. Using a * to indicate quantities measured one year later, the holding period return is

then we can expand the holding period return in powers of $\Delta y_{n-1}$, getting

The excess holding period return $1 + h_n$ is the yield in excess of the risk-free rate, i.e.

Now we are in a position to start making sense of the shape of the yield curve. Taking expectations of both sides of this equation gives us the relationship between holding period returns, yield curve shape, convexity and expected interest rate changes,

where $\sigma_{n-1}$ is the volatility of yield curve movements (which can be estimated empirically, inferred from option prices, or plugged in from a model).

We can now rearrange to find the forward rates in terms of the risk-free rate, term risk premium, expected interest rate changes and convexity advantage. Using the fact that $p_{n-1}/p_n = 1 + f_{n-1,n}$ we get

I haven't talked about supply-demand effects, either on the micro or macro scale.

Micro structure effects do not fit into the above model since I have assumed zero coupon bonds with essentially infinite liquidity, a liquid market for borrowing and lending the bonds, and no taxes. However, micro effects can be important for measuring and building yield curves in the real world, for example

I thought it could be useful to illustrate my initial points with some examples of yield curves.

First a "normal" curve - the USD swap curve on 7th May 2001. The curve is positive, upward sloping and concave - 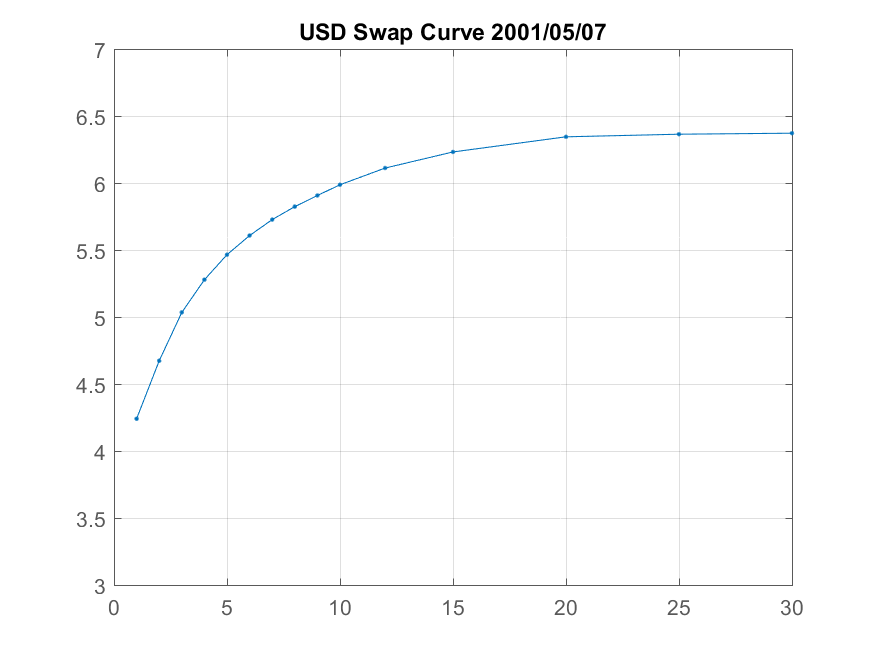 The EUR swap curve in December 2017 had negative swap rates out to seven years. It also displays a non-monotonic shape, with 1Y rates above 2Y rates. 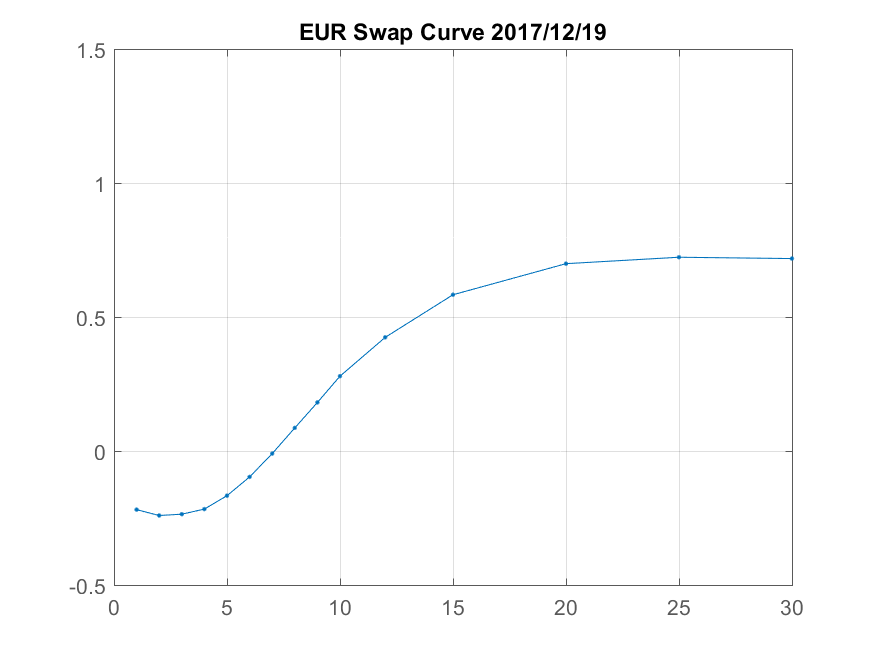 In late December 2009, as the first inklings of the Eurozone debt crisis led to widespread expectations of rate cuts, the EUR swap curve became inverted, at least in the 1-10Y sector. 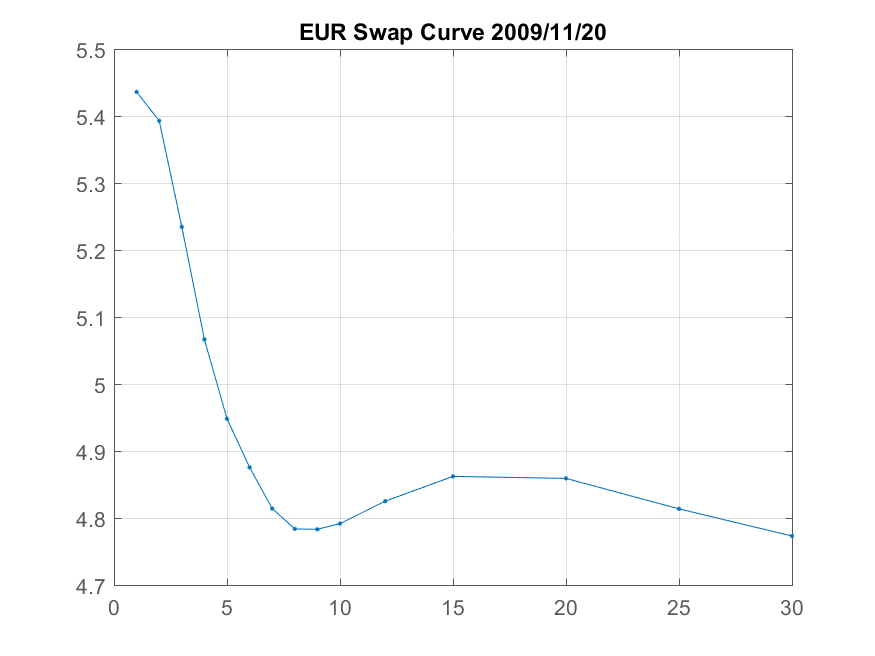 Finally, in late 2008 the US swap curve displayed an unusual humped shape. Volatile interest rates increased the convexity value of long-dated swaps, so yields decreased to compensate. At the same time the front of the curve remained steep, reflecting both a belief that interest rate cuts were broadly done, and a risk premium for holding longer dated (5-10Y) duration risk. 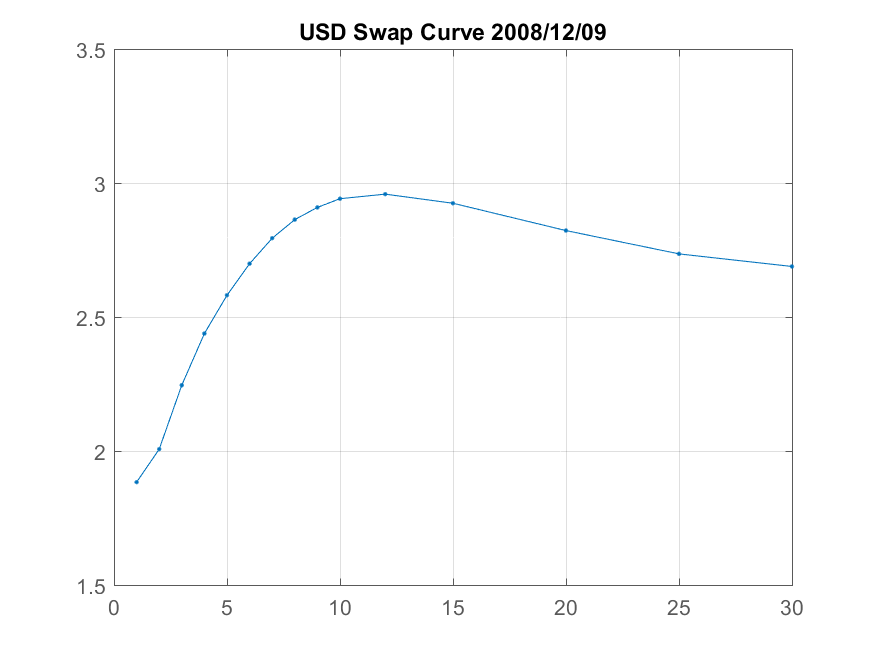