A soft American option (also called a pseudo-European option) is only subjected to early exercise from the standpoint of the financing of the intrinsic value.

An extension of this definition is that only one interest rate, that affecting the the financing of the premium for the operator, impacts the decision to early exercise.

Example: Assume that an asset trades at \$100, with interest rates at 6% (annualized) and volatility at 15.7%. Assume also that the 3-month 80 call is worth \$20, at least if it is American. Forgoing early exercise would create an opportunity cost of 20 x 90/360 x .06 = .30 cents, the financing of \$20 premium for 3 months. The time value of the equivalent put is close to zero (by put-call parity), so the intelligent operator can swap the call into the underlying asset and buy the put to replicate the same initial structure at a better cost. He would end up long the put and long the underlying asset.

I have three questions here

Q1. My understanding is, "soft american options" are in general call options, that the option's value is due to the increasing of the stock value. Since stock value grows faster than interest rate, it's not advisable to early execute, unless, the interest rate is too high. The other case is put options, as time goes by, stock price increases and option's intrinsic value decreases, it's more advisable to early execute. Is my understanding correct?

Q2. How did Taleb come to the conclusion that "Forgoing early exercise would create an opportunity cost of 20 x 90/360 x .06 = .30 cents, the financing of \$20 premium for 3 months. "? I couldn't figure out why the financing cost of an American options, is the difference between an American and an European option's price.

Q3. Taleb says "so the intelligent operator can swap the call into the underlying asset and buy the put to replicate the same initial structure at a better cost", I do agree that call = asset + put, i.e. a call option can be replicated by an asset and a put, but why such replication has a better cost?

It is easier to understand Taleb's distinction between 'soft' and 'hard' American options if we understand from the beginning that he is talking about FX options or behaving similarly options on another assets.

Under Garman-Kohlhagen model for valuation, the price of European FX call is:

American FX call price $C_a$ is higher or equal than $C_e$ for any type of options. But for FX options this boundary can be augmented further because under Garman-Kohlhagen model European call may have negative time value or cost less than its intrinsic value. Obviously, American option can't cost less than intrinsic value due to early exercise feature, so: 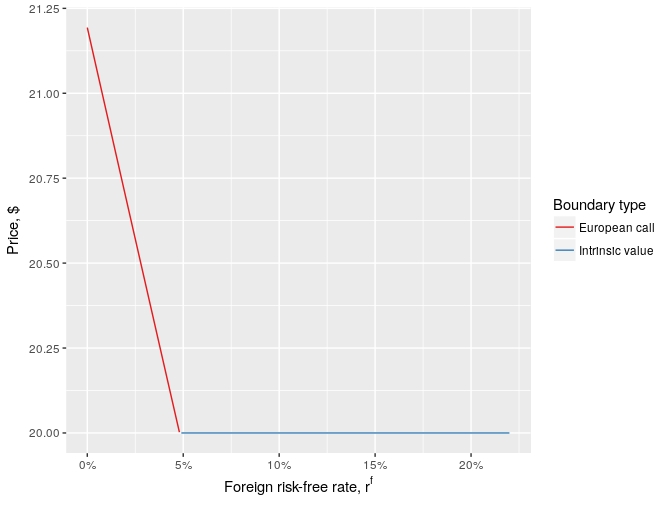 When foreign risk-free rate rate $r^f$ is less than $\approx 5\%$, time-value of both American and European option is greater than zero. This value is lost when the American option is exercised early and generally speaking we would have to take this into consideration, but we will not since Taleb most likely assumes that this is not the case (see below).

Assume (as Taleb does) that the price of put available on the market is negligible and $r^f$ is greater than $5\%$. Compare final payoffs in domestic currency for two scenarious proposed by Taleb:

It is "the interest earned" part of $ V_{N_f + \text{put}}$ which is used by Taleb to gauge 'hardness' of the FX option. In turn, we can further split it into:

Now everything is ready to answer your questions.

Q1. Taleb's distinction between 'soft' and 'hard' options is easier to understand assuming that he is talking about FX options. An FX option is a 'call' option in one currency and 'put' in the other simultaneously, so you can assume that 'Soft American Option' may be 'put' as well as 'call'.

It is relationship between foreign and domestic interest rates, not the growth or change of the exchange rate, that defines 'softness' of the American option as described above.

It is interesting that Hull's appreciate this fact:

but then gives what appears to be an incorrect explanation to this fact:

Then he calculates "financing of intrinsic value" as in formula $\eqref{two}$ above. "carry cost of the underlying" is zero in this case. Forgoing early exercise would lost this interest.

Q3. Replication might have better costs if "the interest earned" component in $\eqref{one}$ is positive. It is likely the case when the call is very deep in-the-money, volatility is low and $r^f \geq r$. If $r^f < r$ "the intelligent operator" will need to take into consideration the loss of time value due to early exercise (i.e. difference between intrinsic value and the market price of the exercised option).

Not the answer you're looking for? Browse other questions tagged american-options or ask your own question.

2
How far the spot price is likely to go from the current level in three months if its volatility is 15.7%

0
What is the effect of dividend yield being greater than the risk-free rate to American options pricing?
7
American put for negative interest rates
2
pricing american put option with fdm
3
Understanding early exercise of options - The implicit put in an American call
4
Pricing the European counterpart from American Options
2
How far the spot price is likely to go from the current level in three months if its volatility is 15.7%
4
Early exercise of American options
0
General questions about american options
1
Under what conditions will both European and American put options worth the same?