I am trying to calibrate a local volatility model to observed implied volatility smiles (not surfaces!, just a smile given for fixed maturity).

My question however is, where does this approximation come from?

I know Dupire's formula, you know the one that is a fraction of two integrals. I can't quite find it, but is it from that the approx is derived? If so, how?

Assume the local volatility dynamics is: $$dS_t/S_t = \sigma(S_t) dW_t^\Bbb{Q} $$ where we have just assumed $r=0$ without loss of generality (if $r$ is not zero, you just need a change of measure to the $T$-forward measure).

Suppose you would like to fit the market implied volatility smile $\Sigma(T,K)$.

There is no closed-form formula to express $\Sigma(T,K)$ as a function of $\sigma(S_t)$.

There are however a bunch of approximations available in the literature:

@Quantuple's answer is correct. There is no exact closed-form formula for call prices or implied vols as a function of local vols, which is unique and ironic, given there are formulas the other way around. The closest thing to a practical exact formula, to my knowledge, is the harmonic short maturity expansion given in the answer.

However, (and this is a direct answer to your question), the so-called "sigma-zero" formula does provide an exact expression for the implied vol as a function of the local vols, although this is an implicit formula, and the evaluation of some of its terms requires a numerical implementation. Hence, this formula, despite being exact, is not directly usable in practice. 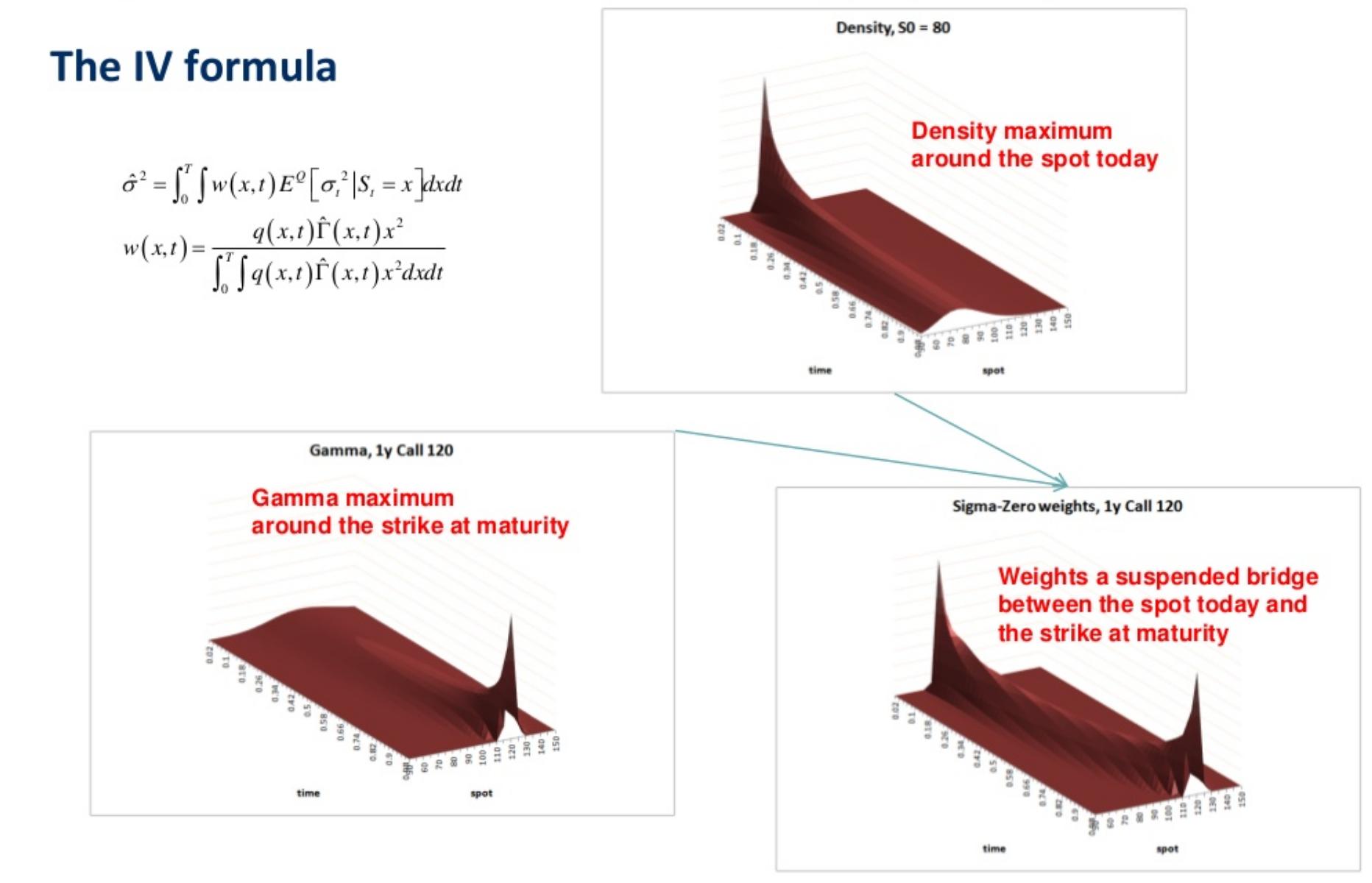 For a demonstration, please see this video: Antoine Savine, RiO2018 or access its slides on SlideShare. You may also consult my lecture notes here, slides 71-78.

Note that the sigma-zero formula was also found (but not published) by Dupire, and his demonstration is particularly enlightening, in what it comes from an analysis of hedge errors.

Despite its impracticality, this formula offers a deep intuition of how local vols combine to produce European option prices and implied vols, and it has been the basis of a vast amount of work to find more or less precise, more or less complicated practical approximations, most prominently by Blacher (see his talk on RiO 2018 on YouTube) and Gatheral (in his famous textbook Volatility Surface).

By far the simplest (but definitely not the most accurate!!) of these approximations is to note, as seen on the picture, that probability density is maximal on the spot today, whereas gamma is maximum at the strike at maturity, hence a simple approximation is to average local variances from these two points, ignoring the rest of the surface.

And this exactly is the approximation you are asking about :)

Not the answer you're looking for? Browse other questions tagged volatility or ask your own question.

8
Is the local volatility linear if smile is linear?