I am reading the following two Markit documents concerning the bootstrapping of respectively the USD rates curve and the EUR, GBP, JPY, CHF, CAD, HKD, SGD, AUD and NZD rates curves. (Both versions are the last versions.)

These curves are not curves to be used ase discount curves in a "real" pricing process, they have to be seen as "convention" curves used in the ISDA model for quotation purposes. (All currencies except JPY the only holidays are week-ends (JPY has the TYP holidays calendar.))

1) First question. In the second document page 7 one sees the following table : 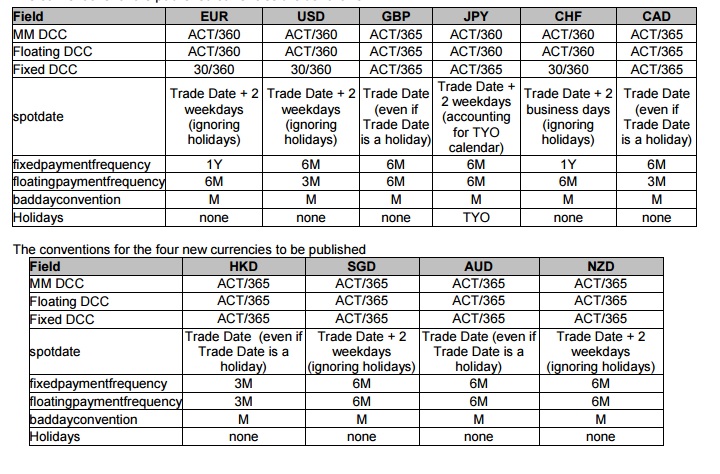 I perfectly get what "Trade Date + 2 business days (ignoring holidays)" (spotdate row for CHF) means : it means that the spot date is equal to the date resulting of the shif of the trade date by to business days forward, the "ignoring holidays" being here surely to recall that there are no holidays except week-ends for EUR.

I get as well what "Trade Date (even if Trade Date is a holiday)" (spotdate row for CAD for instance) means (obvious).

But what does "Trade Date + 2 weekdays (ignoring holidays)" (spotdate row for EUR for instance) exactly mean ?

2) Second question. There's something I don't understand in the bootstrapping process. Quote from the second document end of page 8 and top of page 9 :

Writing the definition of $s_{2Y}$ (the fixed rate making the value of the swap equal to $0$ at inception (that is, at $T_s$)) and sparing the details, one finally arrives at an equation of the form :

For each payment in the swap you want this:

Where $r(\tau)$ is the instantaneous rate. They're saying that $r(\tau)$ is constant between nodes, so for your interpolation for the 18m point you would do this:

Not the answer you're looking for? Browse other questions tagged interest-rates swaps cds libor bootstrapping or ask your own question.

1
what data to use to compare the interest rate among different currencies?
4
If floating leg in an arrears swap is paid on the date then valuing them is like predicting future
2
LIBOR Quoting Conventions
1
A question about dates generation
3
Convexity adjustment when payment if after interest natural term?
2
ISDA CDS model Upfront Fee
1
From Libor Curve rates to "forward" zero-coupons
4
CDS - IR currency for conversion between upfront and conventional spread
3
Bootstrapping discount and forward curve (using ESRA) and price a vanilla swap