What are the effects of turning a backed currency into a fiat currency?

I hear a lot of debate over the removal of the U.S. Dollar's precious metal backing and the subsequent inflation rates, but is there any proven relationship between unbacked currency and extreme inflation or is fractional reserve banking by individual corporations more to blame?

In short, what are the real effects of the removal of precious metal backing from the U.S. money supply?

Let me answer your questions in reverse order:

...or is fractional reserve banking by individual corporations more to blame?

The majority of money created in the US (and indeed, the world) is created by private banks through fractional reserve lending, not by central banks creating fiat money. 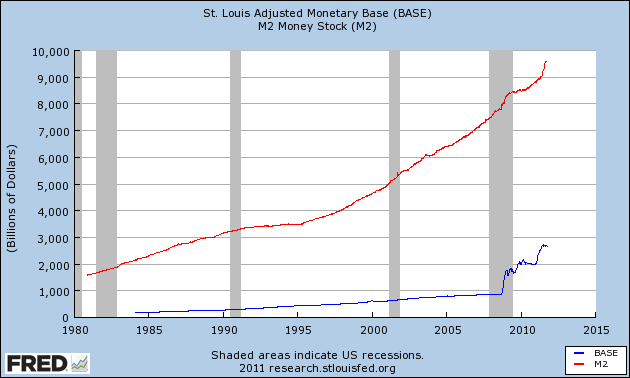 Monetary base refers to money that banks hold in their accounts at the federal reserve as well as currency in circulation -- in other words the money that the government has the most control over.

M2 is a measure of money that includes bank lending. Although the ratio of M2:BASE has fallen in the last few years, M2 is still clearly far bigger than BASE. 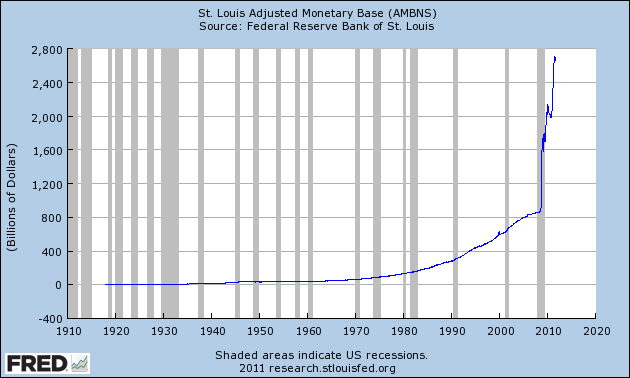 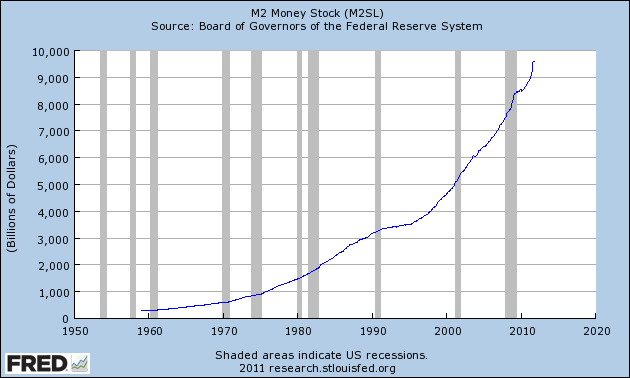 Now back to the first part of your question:

is there any proven relationship between unbacked currency and extreme inflation

Depends what you mean. Unbacked currency doesn't lead to runaway inflation in all cases. Look at all of the major currencies today: slow and steady inflation for most of the last 100 years.

In a few cases, unbacked currency has been involved in runaway inflation. Typically runaway inflation is not strictly a monetary phenomenon, but also involves political factors. (See Zimbabwe). I wouldn't call this "proven", however.

There are also some instances of hard monies experiencing dramatic inflation throughout history. European monarchs accomplished this by debasing pure gold and pure silver coins with cheaper metal alloys. The US had a number of financial panics related to rapid increase and then collapse of money supply even when on a supposed "gold standard", e.g. the Panic of 1819.

The Panic of 1819 is a controversial topic. Although it does indicate short comings of a "gold standard", it is essential to remember that the government was still manipulating the money supply even in 1819, and therefore the gold-backed money was still not a free market money.

I'm not aware of any cases in history where a commodity money or commodity-backed money experienced hyperinflation on the scale of Zimbabwe.

Fixing velocity, inflation is the difference between changes in money and changes in gdp. (to see it take logarithms).

Now we need theory. Take simple monetarism.
I'd argue: with gold-backed dollars changes in money (M) are fixed to gold discoveries. Once you switch to fiat currency central bankers can choose any M they want.

It is the choice of M that matters for inflation, rather than the backing.
You can argue that Phillips curve targeting made central bankers choose very high M in the past, resulting in inflation.
But M is such a critical variable for the economy that you can argue pretty much what you want, as long as you have a theory to back it.

Overall I'd say that fiat money gave a new important tool to whoever control the money supply to affect the economy. I'd also say that the benefits far outweigh the costs.

In 1945 at Bretton Woods, the war-time allies agreed on an international gold standard to stabilise the world's economy. Gold was fixed at \$35 / ounce and all other currencies were pegged to that price via the US dollar. The US became the reserve currency of the world.

The problems for the US began immediately. In order to ensure liquidity – an availability of US dollars that other nations could use for exchange between each other – they had to run a massive deficit. And, while the currencies had to maintain their pegged rates, gold was freely traded. To ensure that continued price of \$35 / ounce was extremely expensive and, ultimately, futile.

The dollar became extremely overvalued while, despite their now equal importance to the world's economy, Japan and Europe found their currencies undervalued. In 1971 Richard Nixon unilaterally delinked the US dollar from gold and allowed it to float.

Fractional reserve is not a problem as far as inflation is concerned. Governments print money via their Central Banks. Independent Central Banks are less likely to go on printing sprees ("quantitative easing" aside) and so accountable democracies are unlikely to suffer from hyperinflation. Private banks are constrained by law in terms of the reserves they must hold in order to lend. After the recent economic crisis, these laws are likely to tighten up.

Hyperinflation tends to start as deliberate government policies to pay debts through debasing the currency rather than through economic growth.

The real effects of the US dropping the gold standard was the longest and greatest period of economic growth in world history.

Not the answer you're looking for? Browse other questions tagged currency or ask your own question.

2
The Fair Value of Paying in Currency X for Goods Bought in Currency Y
0
Understanding the payoff of currency options
0
How to take into account currency risk when optimizing portfolio?
2
How are asset backed cryptocurrencies priced?
2
Why do higher interest rates increase the value of the currency?
0
What quantifiable factors contribute to the globalization of a currency?
0
What determined the weights of a currency in the International Monetary Fund SDR basket(2015)?
0
What is the difference between a non-convertible and a non-deliverable currency?
0
How are currency exchange rates on yahoo finance computed?