In the attached image I have a plot of the rolling correlation of 90-day historic volatility (using the Garman Klass estimator based on Sinclair's Volatility Trading) of JPM v. the S&P. As can be clearly seen, the correlation is generally somewhere near 1. However, there are times when the correlation degrades significantly (witness summer 2011). I'm curious of two things: 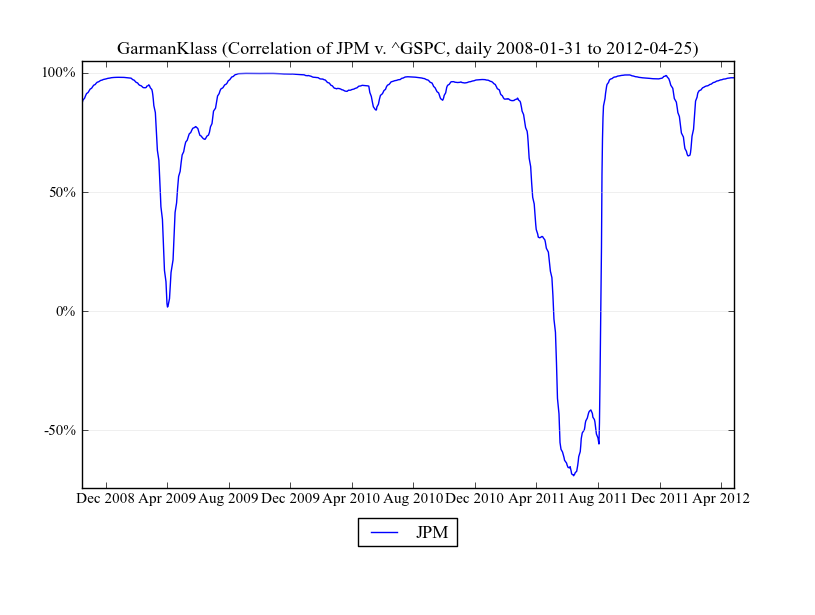 volatility trading
Share
Improve this question
asked May 1 '12 at 13:27

There is a simple explanation in this specific case (SPX vs JPM rolling 90-day realized vol). When you look at the specific daily price series of SPX and JPM during August 2011 (a very bad month for most hedge funds) you will notice 2 main differences between each series:

1) JPM was already in a down trend and thus negative returns (or lower closing prices vs. previous day closing prices) in August did not push up its 90-day rolling vol up by too much. On the other side traded at very lofty levels all the way into July 22 2011 when market participants started to dump shares. Thus the negative returns (lower prices) pushed up volatility in SPX by much more than the vol measure of JPM.

2) During the days when the market generated the biggest losses for both JPM, and SPX the key difference here is that JPM traded very large intraday ranges while the closed to previous close was only elevated at 3-4 occasions in August while SPX traded relatively similar large intraday ranges but the close to previous close was also very large. This leads me to an observation of the GK formula:

You notice that GK favors high intraday ranges and penalizes for large close to close ranges. When factoring points 1) and 2) into the formula one sees that the effects are partially offsetting each other, but my hunch is that the change in vol profile in SPX (point 1) are overshadowing the higher GK vols in JPM due to relatively higher intraday vol vs close to close vols.

To get to your questions:

1) Someone pointed out you need to make sure you understand the differences between your historic vol measures and implied vols. You mentioned you look for strategies on the listed options side making this a lot more difficult to exploit. Let's say you are good at forecasting a breakdown in your specific correlation figures. This in itself does not give you anything. You need to test for auto correlation in order to benefit from such ability looking forward. Also evenif you correctly predict a breakdown in correlations you need to be right on which asset's vol profile outperforms the other (the sign of GK(SPX , 90) - GK (JPM, 90) for example). Given you are able to do so your only way through listed options is to trade gamma differentials. You buy gamma in one underlying and dell the gamma of the other. You are much luckier on the OTC side because you can trade correlation swaps, soft exotic correlation/dispersion baskets to express views in changes in correlation profiles.

Hope this helps a bit.

There may be many reasons for such correlation breakdowns - quarterly earnings announcements that result in elevated volatility for JPM but not SPX, or systematic risk: JPM being a bank has more Euro-debt related risk than SPX.

Having said that to trade options you should be looking at implied volatility time series.

Not the answer you're looking for? Browse other questions tagged volatility trading or ask your own question.