How to quantify how many ECB hikes are priced in?

My question comes in the same vein as the market estimates (roughly) how many hikes are priced in the US through looking at Fed Funds futures contracts. Is there a way to come up with a similar estimate in Europe, and if so, which contracts would one refer to? 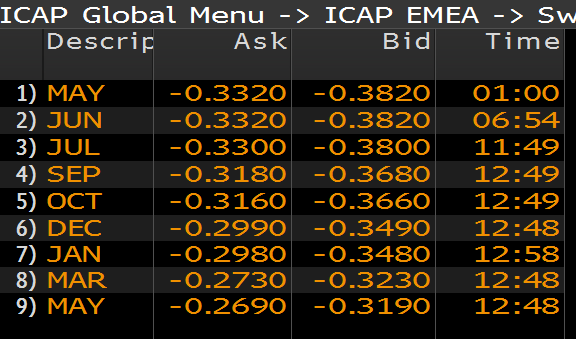 Here are some BBG quotes for EUR OIS meeting contracts. AUD, CAD, EUR, GBP, NZD have reasonably liquid OIS meeting contracts. A meeting contract represents a forward OIS contract starting on one central bank meeting date and terminating at the next central bank meeting date (actually effective dates of the meet dates I should say - usually the next day except for EUR where the effective date tends to be the Wednesday of the following week which is usually 6 days later than the meet date).

You can probably think of the daily fixing for the appropriate OIS index (e.g. EONIA for EUR and SONIA for GBP) of each currency as being roughly constant over the life of the contract except for some end-of-month funding oddities that cause spikes in the respective indices sometimes. Then consider the fixed rate of the meeting contract relative to what the current policy rate is to get the expected number of hikes.

Another technicality is that there is often some spread to where the fixing are currently happening relative to where the policy rate is targeting. As an example, for GBP, SONIA is fixing around 21.2 bps for the most part even though the policy rate is 25 bps. Right now the first GBP OIS meeting contract (GPSF1A Curncy in BBG) is trading around 21.1 bps - this implies pretty much a 0% chance of a rate change - and not a (25-21.1)/25 chance of a 25 bps cut because the fixings are already around 21.2 bps as it is.

To value the swap properly, you need to use the correct conventions for each currency and bear in mind that the floating leg is compounding daily (weighted by the number of days between fixes). The compounding is probably just a rounding error, but getting the ACT/36X convention right is important.