Calculating alpha and its meaning

According to wikipedia, CAPM model is described by:

Since we could also write the CAPM as $R_i-R_f = \alpha_i + \beta_i(R_m-R_f)+ \epsilon$, could we just run the OLS regression and get the alpha as part of the coefficients that way? If the answer is yes, is there a relationship between the two methods of calculating alpha and do we prefer one to another? And theoretically, how can one make money based on the alpha?

I am sorry if the questions sound silly. Thank you for advance.

Alphas from a time-series regression are error terms in the cross-sectional, linear relationship between expected returns and factor betas. If a factor model were correct those error terms (the alphas) would be zero.

A carefully written version of a standard time-series regression of returns in excess of the risk free rate on market excess returns would be:

Below is a graph of what Prof. John Cochrane likes to call the cross-sectional implications of the time series regression. The intercepts $\alpha_i$ in time-series regressions are residuals in the cross-sectional regression where the regression line is defined by the two points $(0, 0)$ and $(1, \operatorname{E}[R_m] - r_f)$ [rather than being estimated by ordinary least squares]. The logic: if $\beta = 0$ then the excess return should be 0, and if $\beta = 1$, then the excess return should be $\operatorname{E}[R_m] - r_f$; the $\alpha_i$ are the deviations of each portfolio $i$ from that line. 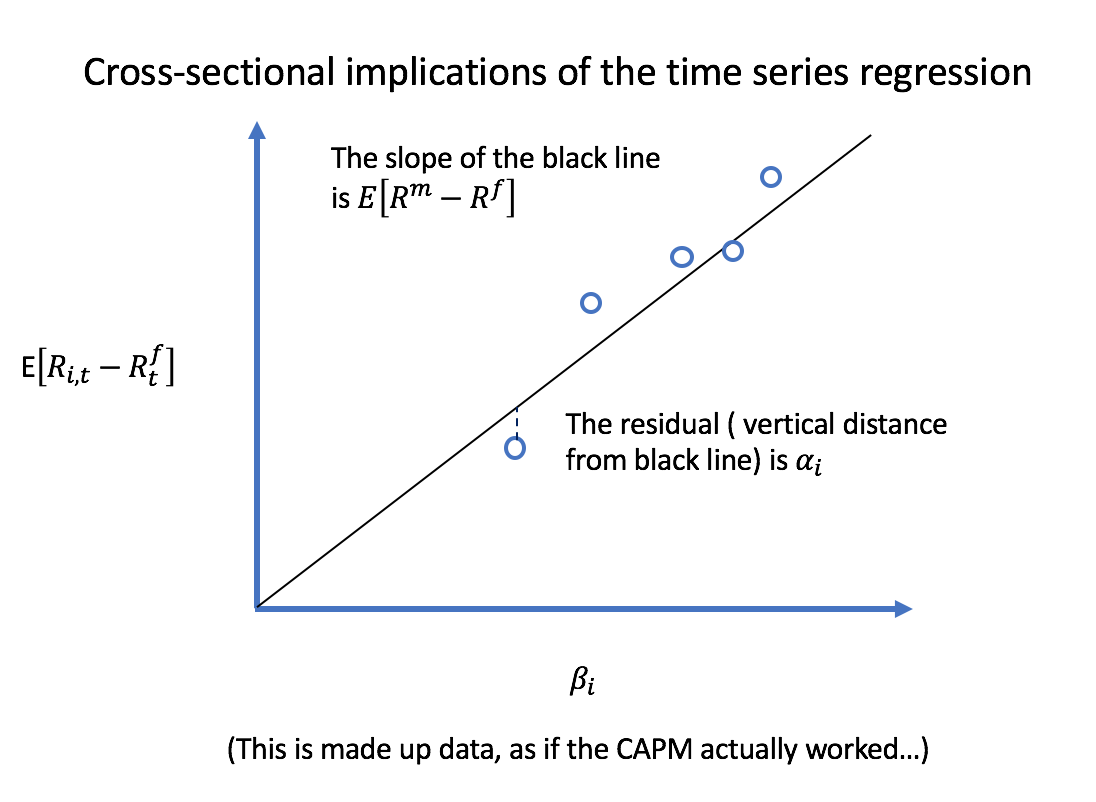 Each blue circle represents a different security/portfolio. For each return series $i$, the estimated $\alpha_i$ from a time series regression is the vertical distance to the black line. If the CAPM were true, all those $\alpha_i$ would be zero and every security would be on that line.

What actually happens? Why does the CAPM not work?

The test assets in the figure below are the 25 Fama-French book to market and size portfolios. If the CAPM were true, each blue circle should lie on the black line, but that's not what happens!

What's even worse of the CAPM is not only are the deviations significant, the relationship, if anything, doesn't even go in the correct direction. The red line shows the estimated cross-sectional relationship between expected returns and market beta: it's estimated to be negative rather than positive. (The last figure is an old one I made for a prior class.)

The intercept term $\alpha$ in a regression of excess returns on other excess returns (interpreted as risk factors) gives you an estimate of average returns that cannot be explained by those factors. Graphically, it's the vertical distance from the black line in the above graphs.

Your estimate of $b$ will be:

So basically, your "two methods" of calculation are exactly the same thing.

"Could we just run the OLS regression and get the alpha as part of the coefficients that way?" NO!

For more, see CAPM is neither a cross sectional model, nor a time series model

8
Is CAPM a cross sectional or time series model?
5
CAPM - Expected vs. actual returns
7
Fama Mac-Beth (1973) vs Fixed effect
5
how to interpret the GRS F test values?
3
CAPM yields very poor fit (low R-squared). Is that normal?
3
Does the CAPM use the single index model?
1
If CAPM holds, should alpha be zero for all assets?
2
Why estimate the (known) market return in the cross-sectional regression of Fama-MacBeth?
1
Testing the statistical significance of alphas in the CAPM
1
fama French regression in Eviews
See more linked questions

1
Calculate alpha (CAPM) in "cross country-portfolio"
4
Fit linear model to higher moments of CAPM
1
How to test the CAPM empirically and how do I use this Kenneth French dataset?
2
Can the historical probability be the same as the risk neutral probability measure?
1
Calculating beta when holding market portfolio
5
Definitions of Beta
1
Difference between Treynor ratio and market premium