I understand that periodically participants exchange the difference in the fixed rate and the daily compounded overnight floating rates.

My question is how should one compute the fixed rate?

What should be used as discount factors for arriving at the fixed rates?

Example if the fixed rates on at-market interest rate swaps is: 2% for 6 months. How this rate is derived?

Suppose the currency is EUR. Taking liberty with conventions, to give you the picture, the floating leg of an OIS swap of maturity $n$ years ("$n$Y") pays every year the compounded OIS rate on all business days on the past year period whereas its fixed leg pays every year a fixed rate $K$. Now the given OIS swap rate quoted on the market is the $K$ such that the present value of the OIS swap is equal to zero. See more information about that here :

Your understanding may be incorrect. As a general rule the participants exchange payments only at maturity (not periodically).

I am not sure what you mean by "calculate". The fixed rate has been agreed to by the participants at the inception of the OIS swap. It is written down in the swap agreement. One party agreed to pay say 2% fixed and the other to pay the geometric average overnight rate. The calculation of the geometric average will occur at the end of the contract.

There is an exception for long term OIS swaps: Periodically (once each year) the participants get together and they exchange "what each owes so far" based on the overnight floating rates that have been seen so far and the agreed fixed rate; this is to avoid the credit risk from owing a large amount that builds up over a long time. In this case instead of waiting until the end they settle yearly. The swap terms remain the same, they are not adjusted or recalculated in any way.

You are comparing an OIS Swap with a fixed float IR swap. In a fix float IR swap, at the time of swap inception, the fixed rate which makes the IR swap value as zero is the swap rate. In calculating the swap rate you need to discount the cash flows to inception date.

Usually the only payments in an OIS swap are done at maturity. In an OIS swap you don't need this discounting. You might as well say DiscountFactor * FixedLegRate = DiscountFactor * AveragedFloatLegRate. The AveragedFloatLegRate is not actually known until the end of the life of the OIS. It is estimated by the party entering in swap (just how the LIBOR float rate is not actually known and just estimated in a fixed float IR swap).

In your example, the party entering in the swap would have some expectation of the overnight rates for next 6 months. the geometric mean of these expected rates would lead to a rate=2%.

Note that discounting would be needed if the payments are annual (for longer dated swaps) or if there is a settlement delay after maturity.

The expression for AveragedFloatLegRate is given on page 200 of Anderson's Interest Rate Modelling: 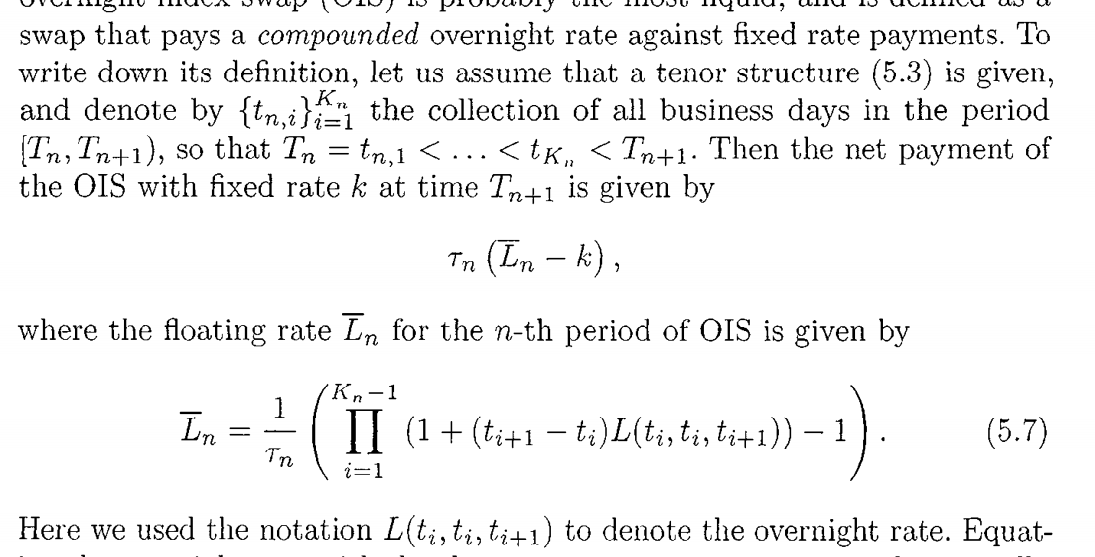 The Traders Corner at the Eris Exchange is a good source of information. Also, Eris makes a lot of OIS data available on their FTP site. This doesn't answer your question directly, but the Traders Corner seems to have more stuff every time I look at it, and Eris itself is a great resource.

According to the Eris website, they receive their OIS curves from CME Clearing, i.e. these are the rates that the clearing house uses to value the instruments in members' portfolios.

As for the fixed rates, you could probably infer these from the settlement prices for swap futures. The majority of swaps are now cleared, and the settlement teams at major exchanges (like CME, for example) can draw on market data from beyond their own exchanges, especially on thinly traded products. The settlement price methodology is typically published in the exchange rulebook (or at least somewhere on their website).

Not the answer you're looking for? Browse other questions tagged swaps ois-discounting ois or ask your own question.

26
how to derive yield curve from interest rate swap?
2
How to compute for basis adjusted forward rate?
3
Why QuantLib computes the fixed-leg swap rate by this formula?
0
Bootstrap daily OIS forward rate
2
Relation between OIS rate and discounting rate
0
OIS Fixed Rate - how to calculate on trade booking?
0
Interest Rate Swap Delta ladder, under OIS Discounting
2
PV of the Floating Side of an "Overnight Index Swap" (at the fixing Date)
3
OIS rate to build Term structure
1
What is Overnight index swaps (OIS) curve