When does the CBOE Put Protection Index (PPUT) make profit?

In my question, as stated in the title, I aim to understand when the strategy of the CBOE Put Protection Index (PPUT) makes profit; particularly during which market conditions.

Given the description of CBOE: that the PPUT index holds a long position indexed to the SP500 and buys a monthly 5% OTM-Put option as hedge, what does that mean in terms of making profit? How does it make the profit?

The PPUT strategy is an example of a "tail protection strategy". The objective is to have a return somewhat similar to the return of the S&P 500 but with better performance during "crashes" (sharp down moves in the S&P). The strategy buys puts, which cost money (i.e. detract from returns) but are helpful when the SP drops more than 5% (improving the return in that case, i.e cushioning the fall).

As berkobay said, the strategy makes money as long as the rise in S&P exceeds the cost of the puts. As we will see later the average cost of the puts is about 10 or 20 basis points per month (although it can be much higher at times, such a after a crash), so for example when the S&P is up 3% in a month the PPUT might be up 2.8%, if the S&P is unchanged, the PPUT return might be -0.20% and so on.

Here are basic statistics for the monthly returns for the PPUT strategy and for the SPX index (recall that the SPX index does not include dividends):

To answer your first question the PPUT makes money a decent percentage of the time (59% of months) but the SPX makes money 62% of he time.

Finally a chart of the PPUT and SPX cumulative returns visually confirms these statistics: a better return for the SPX, but a smoother ride for the PPUT. 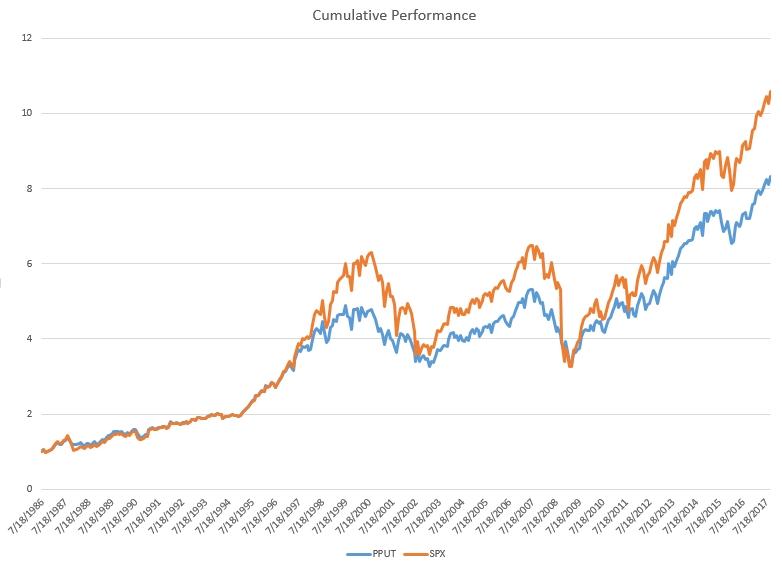 Many more statistics could be computed, of course: I leave those up to you.

Not the answer you're looking for? Browse other questions tagged options finance put or ask your own question.

2
PEGY Ratio: Does it make sense?
6
What does the "-E" mean at the end of a CBOE options symbol?
0
does local volatility make any sense when I only focus on vanilla option?
2
Put call parity: when are the premiums the same?
0
Is the european put option an increasing function?
0
Confusion Regarding Dynamically Delta Hedging a Short Option