By first glance of this time series; will you say it is stationary?

I can easily see some "seasonality" which means that this is not strictly stationary since the distribution will not be the same; higher variance around 1987 and 2008. But is it weakly stationary? The expected value at any timepoint will be zero, so I will say yes it is weakly stationary. Am I right? 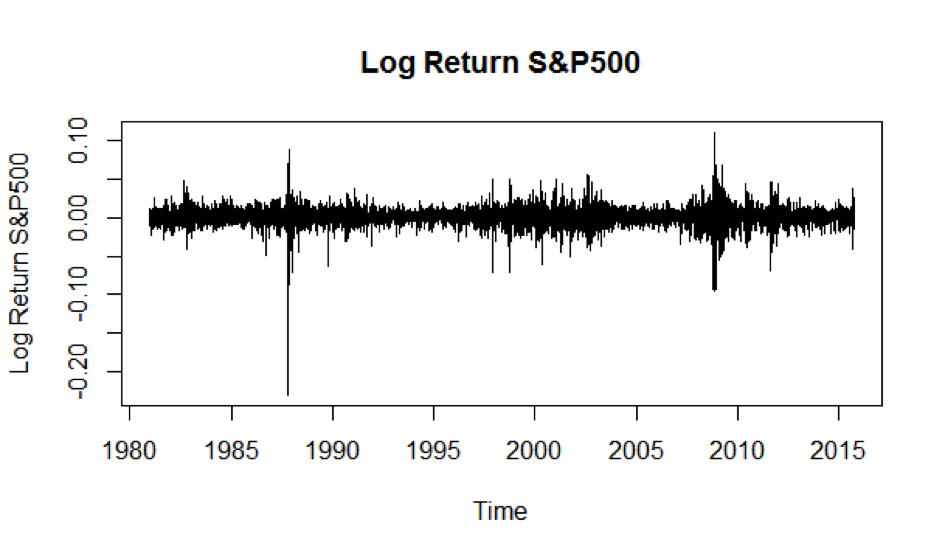 We can talk about whether a strictly stationary or weakly stationary process might usefully describe that data. My answer to both would be yes.

I also have issues with other text that people have written here.

A review of mathematical definitions:

Some intuition for the mathematical definitions

There's a famous quote of statistician George E. P. Box that "all models are wrong, but some are useful." When we build a model for data, we're almost certain to get the model wrong. Under Box's philosophy, what instead matters is whether the model is useful.

Does that capture a key feature of the data (i.e. some simple notion of volatility clustering)? Yes. Does my model have problems? Yes. Is it useful? Depends on the question.

They probably can be modelled using a weakly stationary process.

To quote Section 1.2.1 from these lecture notes:

[Asset] returns [...] typically fluctuate around a constant level, suggesting a constant mean over time. [...] In fact most asset returns can be modeled as a stochastic process with at least time-invariant first two moments.

Mathematically, a time series $\{ Y_t \}$ is weakly stationary if, for all time indices $k,s,t$

From a visual inspection of your series of asset returns,

Let us mentally walk through the implications of stationarity on the S&P 500. First, the likelihood function for $\log(p_{t+\Delta{t}})-\log(p_t)$ is the hyperbolic secant distribution, which has a mean and a variance, but no covariance. So on first blush, it should automatically be stationary, except this ignores a definitional fact.

The S&P 500 constantly has members being added and dropped. Presumably each separate company has its own unique log mean and log variance. So every time a firm is dropped and replaced it MUST change the long run future log mean from the long run past log mean. The alternative is to believe that all capital has the same mean log return.

There should be structural beaks every single quarter. Additionally, as a matter of policy the S & P 500 used to contain ADRs and so currency risk was present as well. Now it only contains American firms. I cannot imagine that such as series could be considered stationary, let alone have stable properties.

The only way you may seriously discuss it as stationary would be to adopt the subjective Bayesian approach where the mean and the variance are not considered points, but rather drawn from a distribution by nature. In that case, you could discuss them, but you should probably seek to defend that added and deleted firms were sufficiently similar that such a subjective statement is valid.

Sometimes you do not need a test, you just need to think about the logic of the implications.

Not the answer you're looking for? Browse other questions tagged time-series statistics stationarity or ask your own question.