I am reading Fortune's Formula by William Poundstone, and I am puzzled by a phenomenon called "Shannon's Demon", which Claude Shannon allegedly proposed in a series of lectures, and preserved only by mimeographed lecture notes. Basically, Shannon's Demon proposes a way of harvesting volatility even when the underlying is driftless and/or one is agnostic regarding the underlying's drift.

The simplest example starts with a portfolio's allocation is split between two assets which can be represented as (uncorrelated) martingales or semi-martingales. Assume that trading is costless and frictionless. The allocation changes, however, when prices change. After each period, the allocations are rebalanced back to their original “target” allocation. As a result of the costless and frictionless rebalancing, the portfolio's expected logarithmic growth rate is greater than the arithmetic mean of the two assets, while its variance is less than (about ~2/3 of) the mean of the variances.

One can easily simulate such a scenario using GBM (or some simpler martingale property, as this example shows) to demonstrate its veracity. I ran Monte Carlo simulations for two risky assets under ABM and GBM. My results were consistent with Shannon’s.

Mathematically, this phenomenon is due to the assumption that portfolio variance is a quadratic function of asset weights. This is not intuitive to me, however.

I partly wonder whether Shannon’s demon, being an apparent free lunch, is valid only for simulated processes... meaning it will not hold up empirically (because either price processes are not actually martingales or the phenomenon is subsumed by transaction costs and trading frictions).

Anyhow, I am looking for intuitive explanations for the phenomenon and/or evidence which shows that frequent rebalancing outperforms using real world assets.

Whether it's called volatility pumping, rebalancing premium, or Shannon's Demon it would just be a form of replicating a short gamma option strategy (eg. selling straddles). Intuitively, you are systematically selling at higher levels and buying at lower levels.

The payoff for continuously rebalancing an equity/cash portfolio without friction when the equity follows a driftless geometric Brownian motion is shown in the graph. (This was obtained with a 10000 path Monte Carlo simulation). There is a tradeoff between frequent small gains and less frequent large losses, reminiscent of shorting straddles.

In the guise of generating positive gains from two losing strategies, this is known as Parrondo's paradox. The examples that demonstrate the effect are typically contrived, exploiting stationarity and a priori knowledge of the parameters. 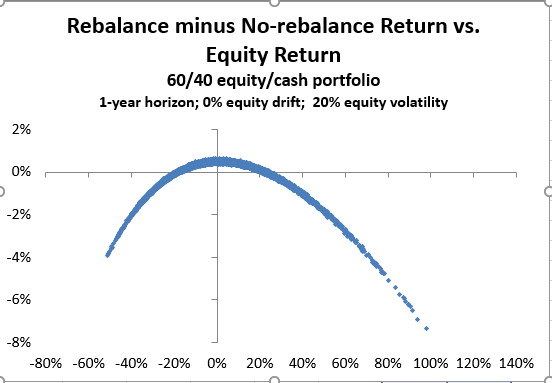 You may find the following paper worthwhile. It addresses most of the above points (and many more) in a systematic way:

Abstract
Volatility is usually considered as a synonym for risk. Mainstream financial theory states that higher portfolio volatility is translated into higher expected returns while diversification helps eliminate idiosyncratic risks. This leaves us with an apparent anomaly as low-risk (low-beta) stocks over-perform high-risk (high-beta) stocks over the long term. Is this really an anomaly? What about high conviction investing? Should we dismiss stock-picking as a futile exercise even if such an approach is used by one of the most successful investors of our times? In this paper we answer these questions and propose a framework that encompasses various investment styles and portfolio construction methodologies. Modern Portfolio Theory is a one period approach relating expected returns and volatilities as two independent variables estimated from ensemble averages. Here we focus on a multi-period setting, which is more relevant for the task of maximising investor’s wealth in the long run. Contrary to previous studies based on maximising log returns, we find no contradictions with the results of modern portfolio theory. We show that Markowitz portfolios and Warren Buffett’s investment style are valid special cases of optimal growth portfolios. In addition, we provide insights on rebalancing bonus, showing how and when it is possible to add value from volatility in active portfolio management. As fire can be either dangerous, if uncontrolled, or useful to run a mechanical engine if controlled, in the very same way it should be possible to put volatility to work in a controlled manner in order to produce growth.

Not the answer you're looking for? Browse other questions tagged martingale diversification rebalancing or ask your own question.

22
Volatility pumping in practice
1
What are the latest developments on "Value Averaging"?

4
Tests for Mean Reversion in a Portfolio Rebalancing
3
black litterman for rebalancing
0
Return.portfolio function for re-balancing with time series of weights
1
Intuitive view of conditional expectation
0
Which dates are optimal for monthly rebalancing of a futures portfolio?
1
Formula for underdiversification
1
Why is standard error used to show diversification effect for unsystematic risk?