Here's an interesting cocktail puzzle related to the term structure of interest rates.

One of the primary competing theories for explaining the term structure of rates is the Rational Exepctations Hypothesis (REH).

Now generally we test a theory by examining the empirical data and seeing which theory explains the data parsimoniously. For example, if the REH is correct then the test is that implied forward rates are an unbiased predictor (regardless of the quality of the prediction).

My claim is that you can show the REH has a bias on a priori grounds and therefore can be rejected. Is the argument correct or is there a flaw? 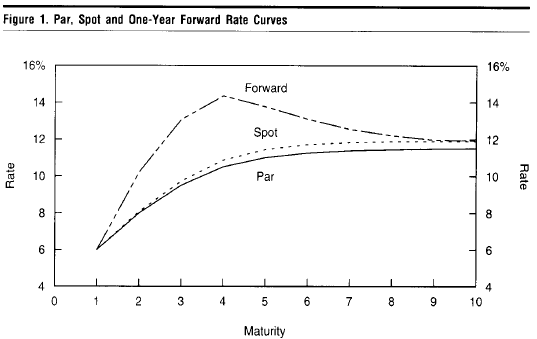 D. By #3, REH expectations are biased since the probability distribution of implied rates assigns zero chance to term structure inversion (although we know empirically there are non-zero chances).

Conclusion: REH is a biased predictor of future rates and therefore the theory is flawed. In particular, the REH biases future predictions of rates upwards when the term structure is upward sloping. Note: This is not to say that implied forward rates cannot predict an inversion with upward term structure. Indeed the chart above shows precisely this case.

Postscript: The Salomon Brothers research team sets up a cross-sectional regression experiment to identify which hypothesis holds up. Turns out they find that the bond risk premium hypothesis does out-performs the REH hypothesis.

The second flaw is that premise (C) does not follow from (A) and (B). Premise (C) states that REH will never predict term structure flattening, but, as you knowledge in your conclusion, the picture provided to illustrate (B) shows a term structure that will not only flatten but invert.

To demonstrate why this is so, note that while it is true that an monotonically increasing term structure requires forwards that are everywhere higher than spot rate, that does not mean that the structure does not flatten. A counterexample is trivial to construct: 5% forward rate in the first period, and 10% forward rates thereafter. The resulting spot curve starts at 5% and monotonically increases toward 10%, a level it never reaches (as of day 0). But every successive day will yield a flatter curve, ceteris paribus, reaching a limit of a 10% flat curve in the absence of new information that impacts expectations.

In other words: if the forward rates flatten, so will the spot.

For a more complex counterexample, refer again to the image in your post, which shows a monotonically increasing spot curve with forwards that imply a future inversion (an act which necessitates an intermediate flattening).

Finally, don't forget that there are many possible term structures with non-monotonic slopes. In such structures, the forward curve will be sometimes higher and sometimes lower than spot. Therefore, (B) is incomplete, as it only considers two cases, and (C) can not be absolute.

Not the answer you're looking for? Browse other questions tagged fixed-income interest-rates or ask your own question.

15
Modelling with negative interest rates
4
How to manage evaluation date changes in QuantLib while using ImpliedTermStructure Class
11
Deriving Interest Rates
0
Bootstrapping zero-rates from AUD swap rates
0
Deriving the Forward Rate Formula from the Expectation Hypothesis
1
Why rise in repo rates leads to increase in forward bond prices?
1
How does one calculate carry-roll-down theoretically assuming expectations of short-term rates are realised