There's a lot of headlines about term premium. If I understand this correctly, term premium compensates investors for holding a longer maturity bond vs rolling over short-term bonds.

However and correct me if I'm wrong but the market's 10-year yield would be closer to 2.5% because of 50 basis point of term premium (I just made this number up)

However, term premium is negative in this market due to the effects of QE, demographics, demand for fixed income which would pull the 10-year yield to let's say 2.25%.

Is this the correct way to look at it? Is there term premium for 2-year, 5-year?

It's a topic of intense interest to me, so it'll likely be a bit more than you asked for =)

Simply put, a default-free interest rate can be decomposed as follows:

I provided some comments in this post and will omit the details here. But you're pretty much correct – if market expectation is that short-term interest rate will be 2% over the next ten years, and ex-ante average term premium is 50 bp, then the ex-ante 10-year spot yield (ignoring convexity) should be roughly 2.5%.

What is term premium?

Term premium, aka bond risk premium (BRP) or maturity risk premium, compensates investors for taking on duration risk. The return of longer-term bonds prior to maturity is not known in advance – you'll sell them with capital gains or losses, depending on how yields have moved. Accordingly, risk-averse investors demand a premium as compensation for this uncertainty.

Based on the decomposition above, if market expectation of future interest rates is completely flat and convexity bias is ignored, the yield curve should still be upward sloping (theoretically speaking), assuming term premium is positive.

How do we know term premium is nonzero?

There are many ways to see this empirically. The first chart below plots the average yield curves since 1945 till the end of 2016. I've chosen this sample because yield levels are roughly the same at the start and end of the sample, so it's less biased. You can see that on average, the yield curve has been upward sloping. It is difficult to imagine that market participants consistently expected interest rates to rise over such a long period that covers both a secular bear market and a secular bull market for bonds. A more plausible explanation is that there are risk premia priced into bonds. 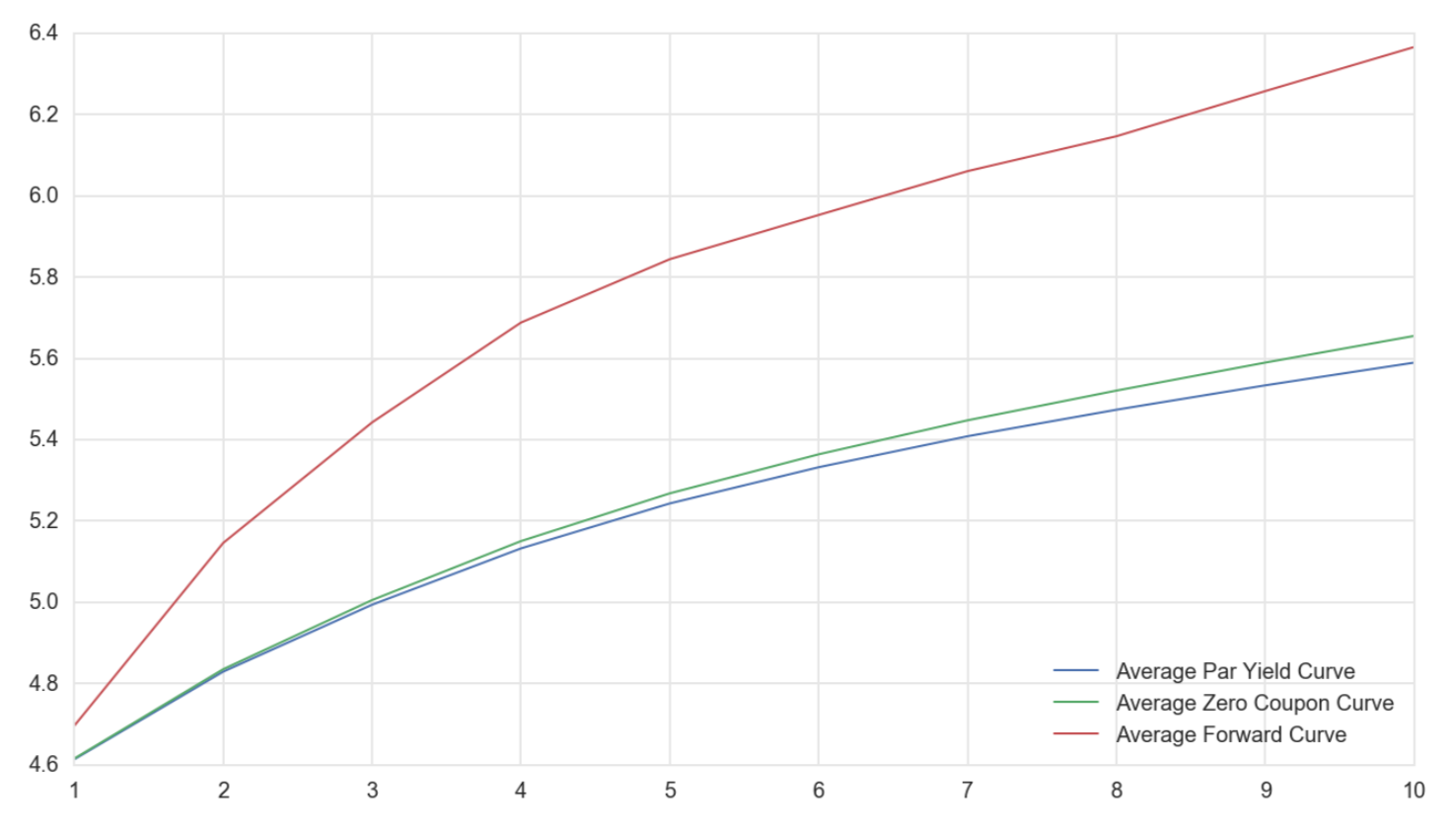 Alternatively, we can look at the realized returns of bonds. The chart below shows the returns of US Treasuries across maturity buckets. If there's no risk premium, then all bonds should have the same returns. Instead, duration extension (moving out the curve) generally provides higher returns. (This is not true for the longest duration bonds, but we'd have to go into convexity bias and other technical factors associated with super long bonds, which detracts from the current discussion). 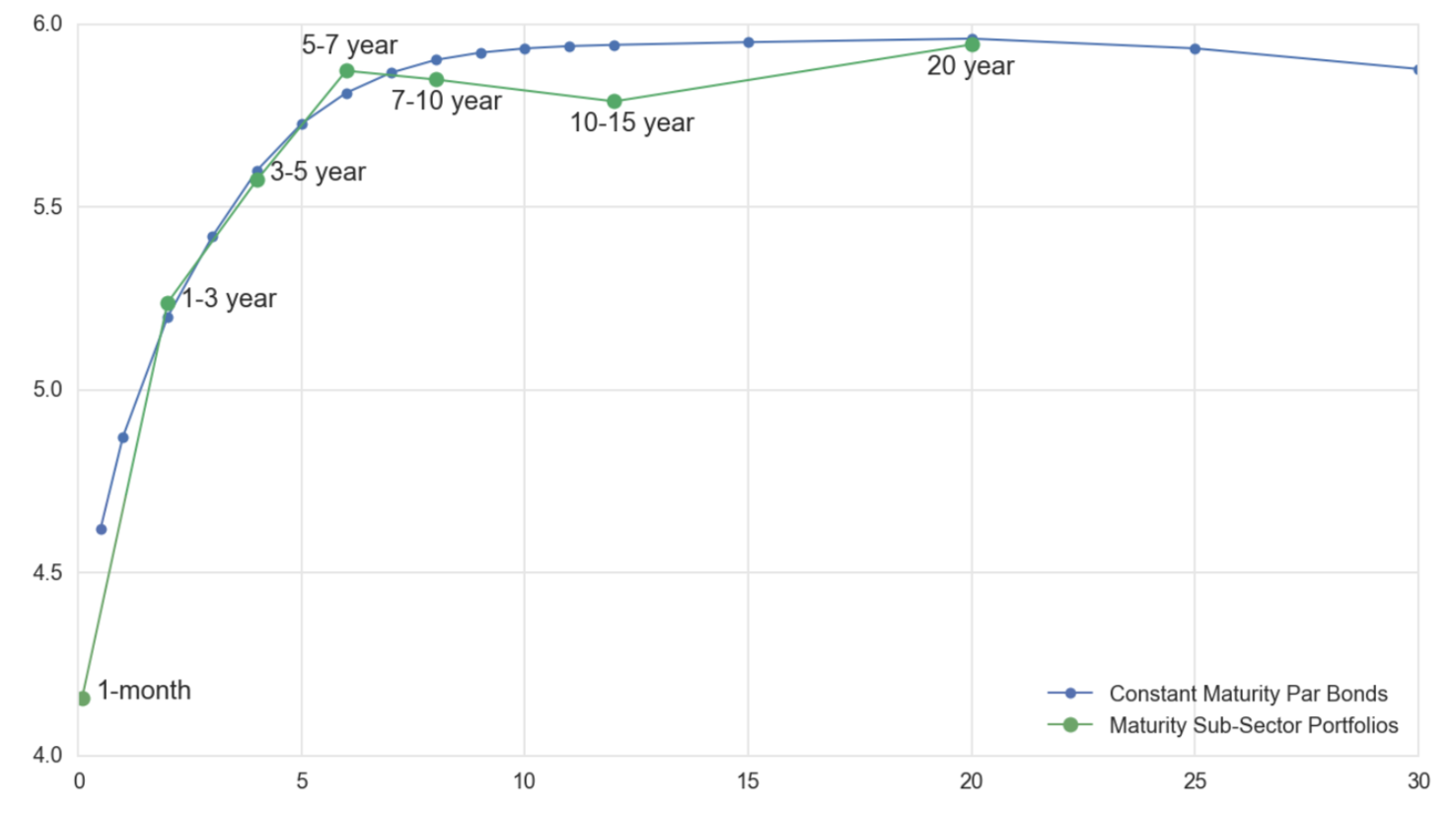 Notably, the conclusion remains true on a risk-adjusted basis; that is, intermediate bonds have higher Sharpe ratios than short-term securities.

Other empirical studies of similar nature include looking at ex-ante yield levels and subsequently realized average short-term interest rates. As an example, the post referenced above provides an example of comparing 5-year forward short rate against subsequently realized short rate. You can also look at 5-year spot yields relative to average bill rates over the next five years. They all paint the same picture.

Academic literature documenting bond risk premium is vast. I recommend the work of Antii Ilmanen and John Cochrane as a starting point.

How do we estimate term premium on an ex-ante basis?

The charts above are based on realized yield curves and realized returns of bonds. The consensus now is that not only does term premium exist, it's time-varying. The holy grail of bond investing, of course, is to ascertain term premium on an ex-ante basis (which is equivalent to forecasting the excess return of bonds). This requires us to figure out the exact amount of "pure" market expectation priced into the curve.

This is incredibly difficult to do! The most popular models nowadays include those pioneered by Kim-Wright and ACM. They are usually term structure models that compute yields in the risk neutral measure and the physical measure, with the difference attributed to risk premium.

Because the official Kim-Wright estimates have a shorter history, I include my own extension below for a longer-term perspective: 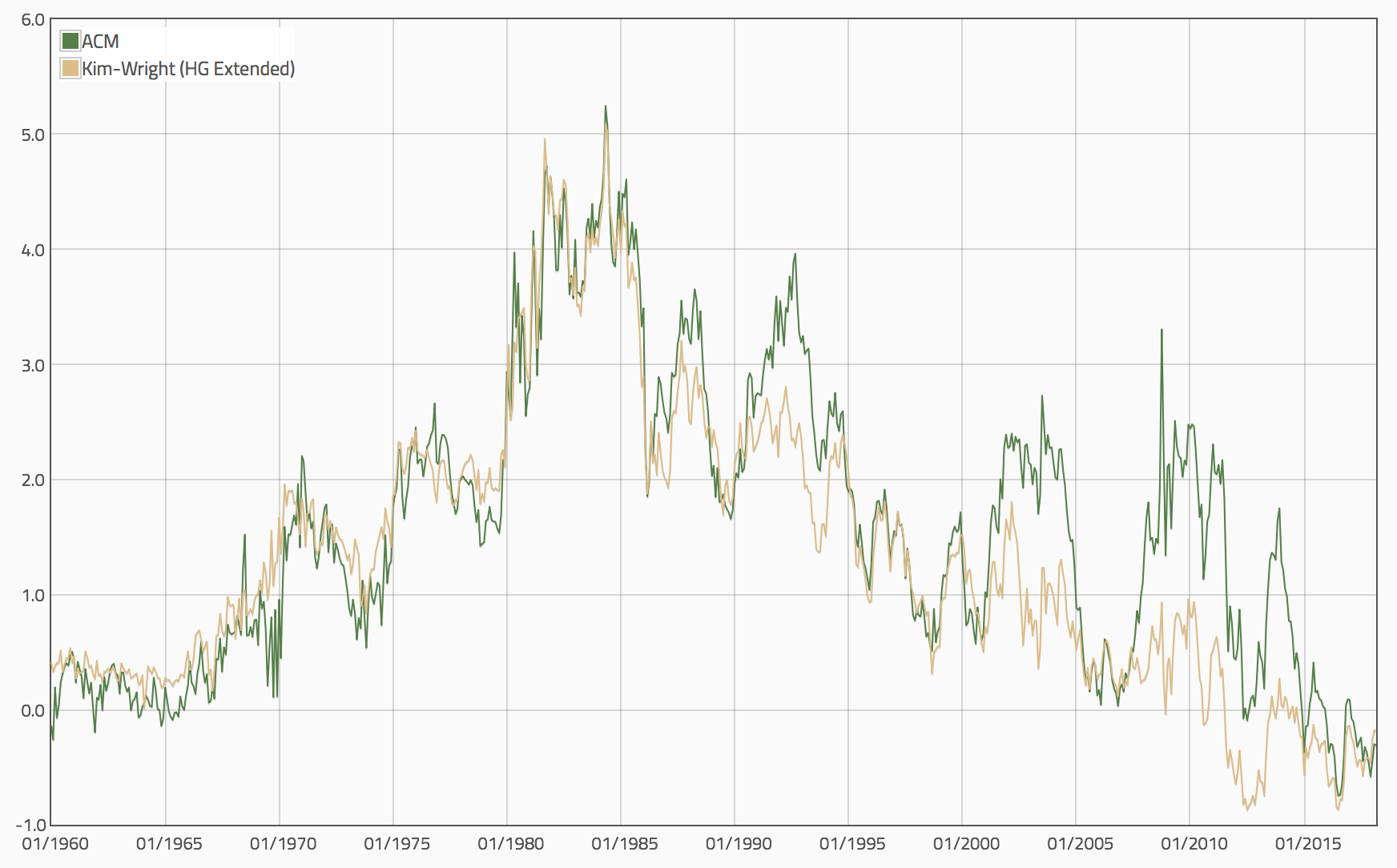 Both the Kim-Wright and ACM estimates point to negative term premium at the time of this writing. Extensive literature has attributed these to LSAP conducted around the world along with some secular forces.

Because this is more opinionated, I will not delve into the details, other than to voice that I do not personally believe that term premium was negative in the past few years. Not only would one have missed out on a lot of excess returns over the past few years, I think there are dangerous policy implications stemming from the belief of negative bond risk premium. As said, this is opinionated and beyond the scope of quantitative finance, so I'll stop here...

Does term premium exist at the front end of the yield curve?

Yes, although it's negligible nowadays for understandable reasons. If you go back enough years, the first step in understanding Fed funds futures pricing was to subtract out some estimates of term premium.

The positive risk premium in the front end of the yield curve is also known as "forward/spot premium" or "forward rate bias" and is extensively studied by systematic investors.

Does term premium matter for us?

It depends on how you trade. If you're buying and holding to maturity, it doesn't matter that much – you'll get the total yield; whether you get it as rate expectations or as risk premium is not that important. However, if your trades are really about harvesting excess returns (as opposed to total return), then it's essential. (As said, I consider forecasting bond risk premium to be the holy grail in bond trading.) Outside of trading, term premium is also important in conducting and interpreting monetary policies.

And don't listen to claims that "there is no term premium" from 15 years ago. That theory (the "Pure Expectations Hypothesis") has been decisively rejected by economists since then. Financial Economics has moved on.

The curve is more complex than saying it is shaped by 'term premium'. The number of different studies and attempts to quantify what term premium is demonstrate the difficulty in truly characterising it and quantifying it.

There are a certain number of other factors that affect term structure of interest rate curves (bonds or swaps):

1) The future expectations of central bank deposit rates (as driven by subsequent inflation expectations). At the short end this is the dominant mechanism of determining interest rates through the transmission mechanism. The further forward you forecast the less certain this effect becomes.

2) Volatility and convexity. Higher volatility usually warrants higher reward, and longer bonds are typically more volatile so command higher yields. Convexity is a positive attribute though and compounded by volatility so this can negate some of those higher yields. (See "Volatility and the Yield Curve" - by Litterman and Weiss)

3) Asset allocation cycles - considering interest rates in isolation is unwise since all financial markets are intimately linked. Personally I suspect that there may well be nonlinear interconnecting forces that no one has yet realised (or at least published).

4) Specific events such as credit worthiness. As an example in 2008/9 UK government long bond yields steepened significantly, at the same time as short bond yields fell. The reason being that the financial crisis had two effects: a) the CB depo rate fell considerably dragging down short yields, and b) the financial system is a major contributor to London's and the UK's economy, with a considerable financial crisis the threat to UK's debt position was enough to cause concerns about the viability of longer maturity bonds.

Anecdotally, my first boss some 15 years ago told me he didn't believe in the term premium and I shouldn't waste much time on it. Rightly or wrongly I followed his advice and it hasn't done me any harm!

Term premium is also lower than that in previous cycles due to the Fed's inflated balance sheet. Last I checked, the Fed has ~$4.0 trillion of Treasury and MBS securities that it has accumulated on its balance sheet. They're running down their balance sheet slowly and still reinvesting at the auctions, however most people think the size of their normalized balance sheet is still larger than pre-crisis due to growth in currency in circulation and other liabilities. Hence, the Fed will also be a source of demand of Treasuries in the future.

Not the answer you're looking for? Browse other questions tagged fixed-income or ask your own question.

11
Deriving Interest Rates
3
How can an inverted yield curve in a liquid market exist?
4
Intuitively, why does liquidity premium contribute to bond yield?

1
What is the yield when a floating-rate note is issued above/below par?
3
Question on pure carry for two bonds
2
Carry and Rolldown of a Premium bond
2
Implied repo rate from carry component
0
"The five year swap has the same dv01 as a par five year treasury bond" Why?