How does Rho behaves with moneyness of option?

I was trying to find the relationship between nature of Rho and moneyness of the option.

After finding certain values I found that Rho Value keep increases as the option gets further in the money. But I can't think of a reason to justify this behaviour.

Can you please explain this behaviour of Rho?

Note: I have amended my previous answer as it was misleading, as pointed out by @byouness.

Indeed, because under Black-Scholes $dS_t = \color{blue}{rS_t}dt+\sigma S_tdW_t^Q$, the greater the current asset value, the greater we can expect it to be at the option's maturity $T$:

Therefore, for a European call option, sensitivity to rates under the asset's drift channel increases with moneyness because the absolute impact of a rate increase to the risk-neutral expected asset price is higher for higher prices $S_t$ hence we can expect the payoff $[S_T-K]^+$ to be larger. On the other hand, the inverse is true for a put by similar arguments.

To understand sensitivity through the discounting channel, it is useful to think in terms of absolute sensitivity $|\rho|$ and consider a zero-coupon bond with principal $N$ maturing in $T$ in a market with a constant interest-rate $r$. Letting $D(t,T)$ be the discount factor, the price of the bond at $t$ is:

The absolute rho of the bond is (note that rho is equal to Macaulay duration scaled by the bond's value): 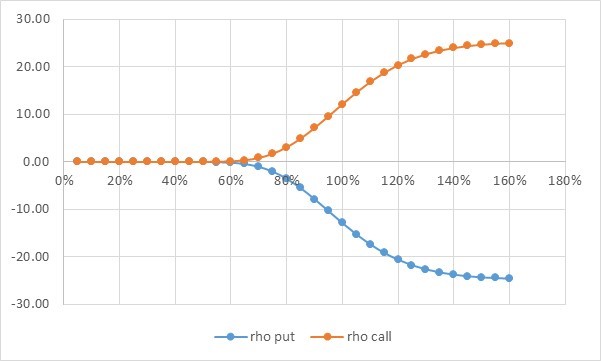 So the derivative is stricly positive which means that Rho increases when S increases. The same calculations can be made for put option where moneyness means smaller S.

If you knew that a Call with strike K will expire in the money (ITM), its value would equal that of a (long) forward with delivery price K. (The delivery price is that agreed at inception to be paid at expiration.) The payoff of a Call that will be exercised for sure is S(T)-K, which equals that of the aforementioned forward.

The value of a forward and a call, assuming the latter will expire ITM, is

where q is the yield of the underlying, for example, the dividend yield of a stock index, a foreign exchange rate, or a convenience yield of a commodity.

Differentiating with respect to r yields

Rho tends asymptotically to the upper limit when the call becomes deeper ITM. This is because a higher S(t) indicates that the scenarios of high S(T) at expiration become more likely, which turn the option more likely to expire ITM, and its rho closer to that of a forward.

Rho tends to 0, the lower limit, as the call becomes deeper OTM. This is because a lower S(t) indicates that scenarios of low S(T) at expiration become more likely, which in turn makes the Rho closer to that of a call sure to expire OTM.

The analysis for a Put is similar. A put sure to expire ITM is equivalent to a Short Forward, whose value is

Differentiating with respect to r,

In our uncertain world the Rho of a Put before expiration is between the Rho of a Short Forward (the lower limit, a negative number) and 0 (the upper limit, the Rho of a put sure to expire OTM).

There is also another Rho, the derivative of the premium with respect to q. But that is another story because the Rho of the Forward depends on S(t).

Not the answer you're looking for? Browse other questions tagged options greeks or ask your own question.

1
Finding Probabilities Using The Binomial Model
3
Pre-trade evaluation and risk assessment of option trading strategies (in market practice)
1
Price volatility and yield volatility
4
Why can't you arb skew by buying options with low implied vol and selling high implied vol in the same month and dynamically hedging?
1
Formula behind pandas.Options() implied volatility
1
What is the probability of a lookback option ending in the money (CRR-model)
1
Option Volatility Smile vs Delta
2
Effect of correlation on a best-of rainbow option