monte-carlo risk-neutral-measure hullwhite
Share
Improve this question
asked May 16 '18 at 14:22

It is not easy to move from risk-neutral to real-world probabilities as this would involve estimating the market risk permium.

The easiest would be to use two separate calibrations:

You need do the market price calibration. As the previous person answered, you can use likelihood to check. To certain limitation of the model itself (in this case HW), even you find good fit parameters, the physical path may not be that ideal or you can never achieve. Not sure if this answer your question but trying to be helpful.

Note that under Risk Neutral measure, Hull White SDE for short rate is

Passing from one measure to another is nothing but changing the drift for $X_t$.

Formally we change the probability densities in $(\Omega, \mathcal{F}, P)$ space but the main result in Ito calculus is that diffusion coefficient always remains the same regardless the measure

In real world, we don't know the future drift of risk asset, probably it is greater that risk-free rate as it incorporates more incertitude.

The best you can do is to estimate it historically, but not explicitly from today's market.

However, for Monte Carlo pricing, it is more convenient to diffuse short rate under T-forward measure:

Why so? Because every time you compute your realized payoff value at fixed MC trajectory, you need to discount this value to time 0.

As you see in diffusion, we have changed (added) nothing but the drift coefficient.

Finally, as we are able to solve these SDE, for numerical precision, instead Euler scheme of discretization you may want to directly simulate solution for each time $t$:

Diffusing the exact solution instead of using Euler discretization is faster and more accurate. 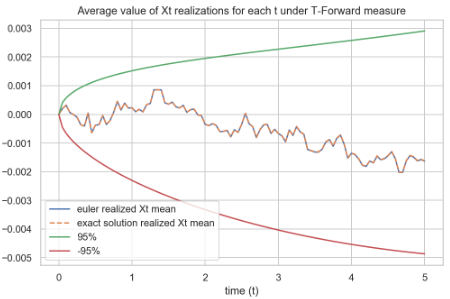 Not the answer you're looking for? Browse other questions tagged monte-carlo risk-neutral-measure hullwhite or ask your own question.