Intuitively, why does liquidity premium contribute to bond yield?

According to the Wikipedia, "The upwards-curving component of the interest yield can be explained by the liquidity premium... Liquidity risk premiums are recommended to be used with longer term investments, where those particular investments are illiquid."

I find it hard to understand when looking at graphs online decomposing the all-in yield to interest risk, credit risk, and liquidity risk. Shouldn't liquidity risk be equal to both buyer and seller thus simply widening the bid/ask instead of moving the fair yield upwards? Why should that be factored in the yield (assuming to be the fair yield in the market). Market structure wise, does it have anything to do with the fact that the US corp bond market is still predominantly a dealer's market?

[EDIT] As Alex C pointed out in the comment. This Wikipedia page might be badly written. But I've found similar conclusions mentioned in a few papers. For example, in this paper, the Author says the following

Also modifying the title to make the question more specific.

To focus purely on (il)liquidity premium and not be bothered by credit risk, let's look at examples from the US Treasury market.

First, the chart below shows the yields of all Treasuries in February 2000, chosen for dramatic effects. The most recently issued 10- and 30-year bonds clearly stand out with notably lower yields than surrounding issues. This is partially because these bonds could be financed at lower repos (known as "financing advantage" - this is beyond the scope of this post), but also because investors valued the superior liquidity of these bonds so much that they were literally willing to pay a higher price (and receive a lower yield) for the privilege of buying and holding these bonds. 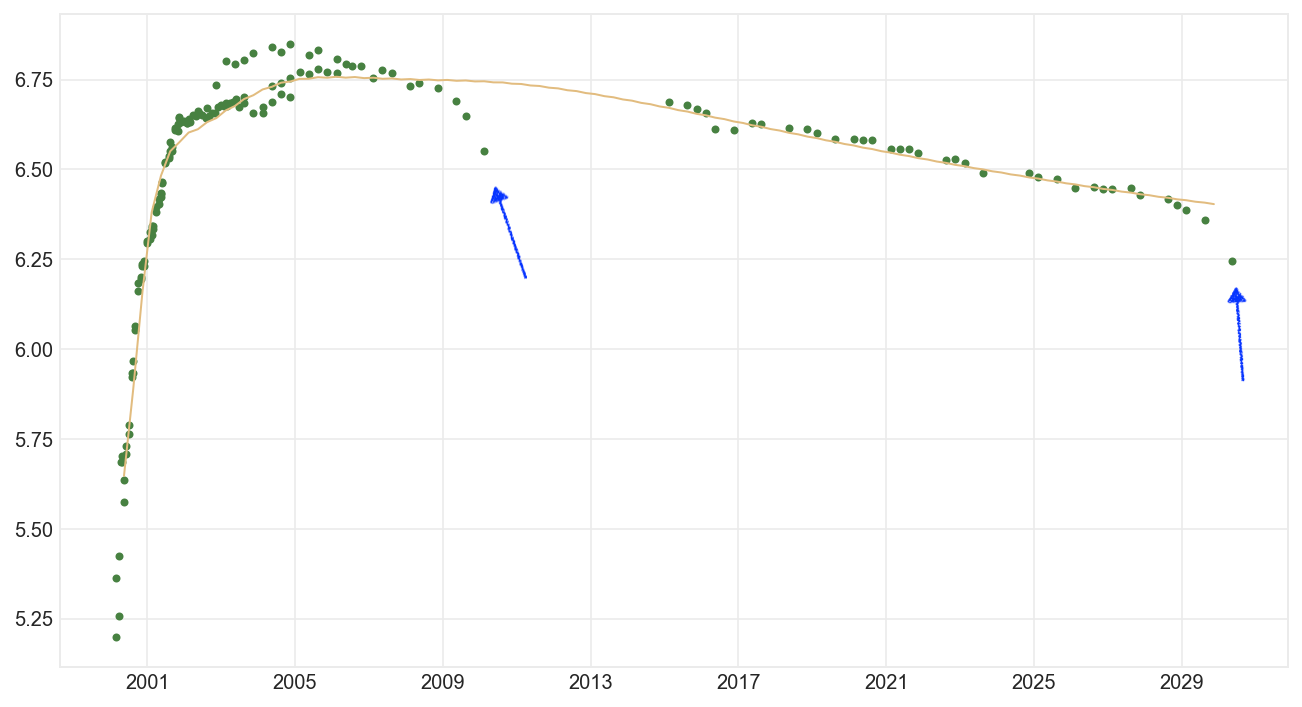 Let's move to a more stressful environment. The picture below shows the Treasury yield curve on December 15, 2008, the height of the financial crisis. As you can see, investors were once again extremely willing to pay extra for the most liquid bonds (e.g., 10s and CTD into the bond futures), which pushed down their yields significantly. By contrast, some of the older 30-year notes became extremely undesired and very difficult to trade; some investors, in desperate need for liquidity, were forced to sell them at a steep discount (assuming they could find any buyer), pushing up their yields well above fair values. 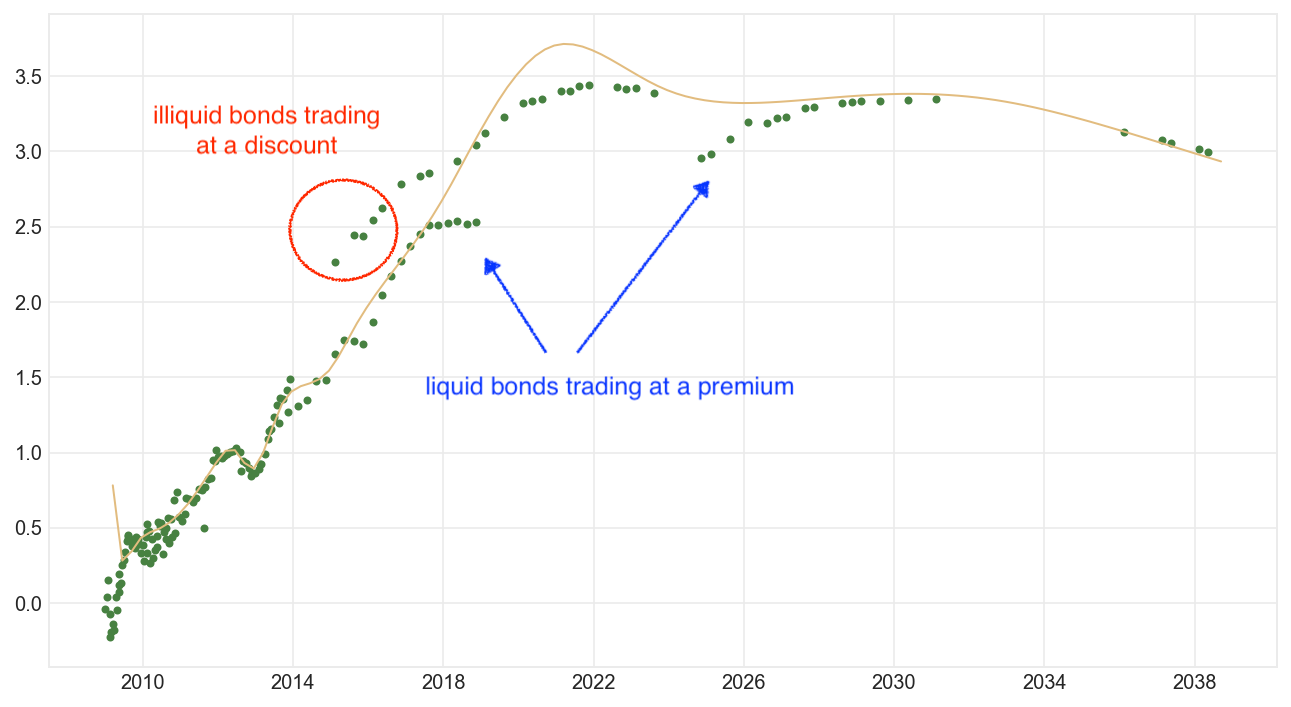 A more persistent example comes from the Treasury Inflation-Protected Securities market. For many years after the Treasury first started issuing TIPS, the yields of these securities were much higher than justified, mostly because investors demanded an illiquidity premium ("illiquidity" is a strong word in this case; TIPS were liquid, but much less liquid than comparable nominal Treasuries). As it turns out, investors' caution was warranted. During the financial crisis, the TIPS market became extremely illiquid and TIPS traded at very depressed prices, as can be seen in the sharply rising TIPS yield below: 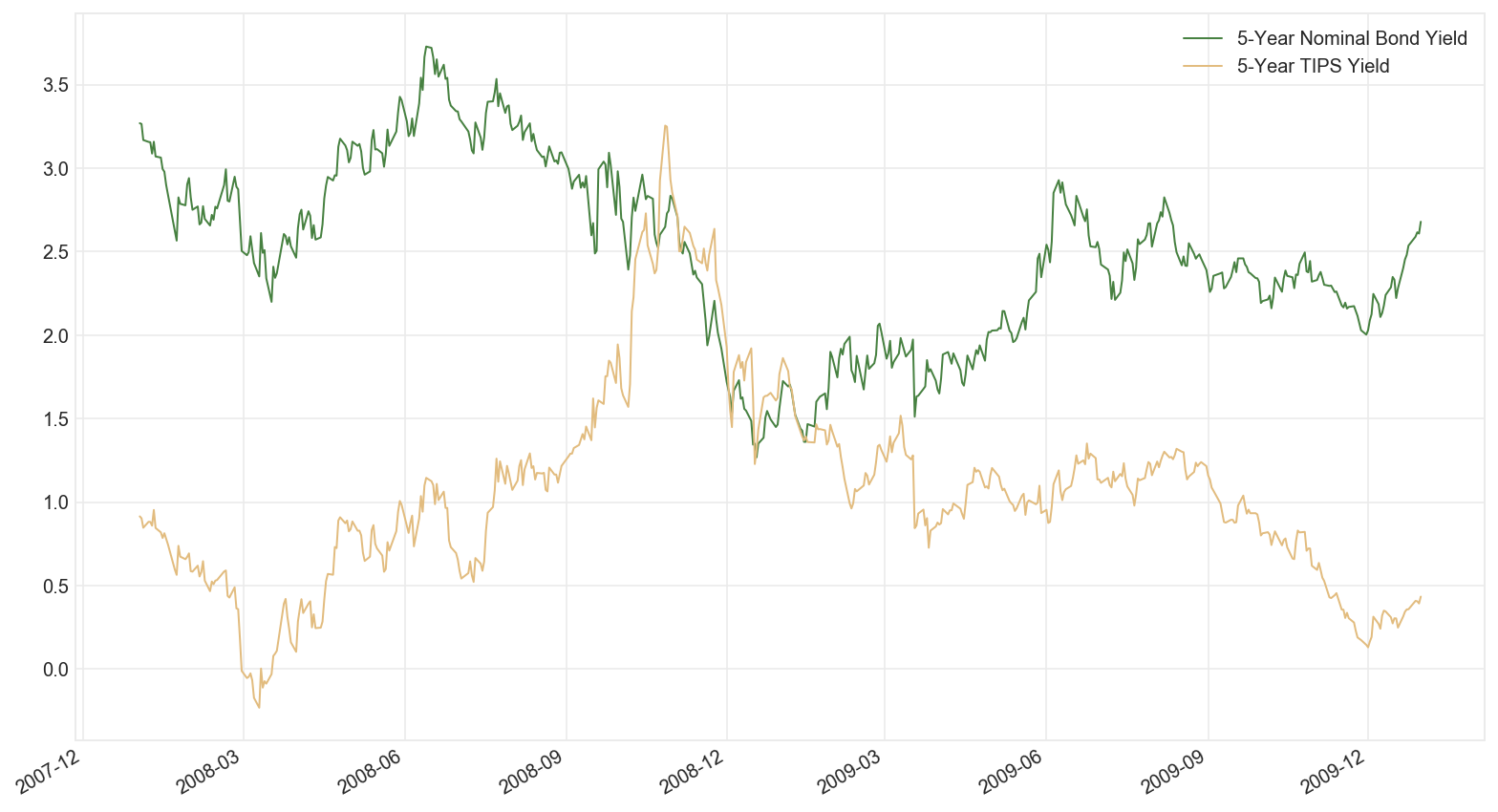 As to whether liquidity premium pushes yield curve to be upward sloping, that's certainly not much of a factor for the Treasury market. A better theory is the existence of term premium, aka bond risk premium.

I do not find convincing the argument that the yield curve is upward sloping due to the lack of a secondary market for longer dated securities. In fact, there is a highly liquid market for 2yr, 5yr, 10yr and 30yr Treasuries and yet the yield curve is still biased to be upward sloping. Intuitively I find that the slope is due to the extra yield that an investor must be paid for investing cash for an extended period of time (yes, an individual investor can liquidate the bonds, but someone must still be holding them). Equivalently, one can think of it as the extra yield being paid for the investor's additional price risk on a long dated security. I think this second effect is what most authors describe as the liquidity effect - the fact that your cash is no longer liquid because it is invested in a long term bond.

This question mixes different concepts. The Wiki page produces all flavours of red herrings. LP is a concept widely used in illiquid credit and alternatives, such as PFI and infrastructure, or other structured credit assets that are infrequently transacted.

Strictly speaking, any premium from investing in alternative credits may not reflect a reward purely for additional illiquidity risk.

Consider two bonds each consisting of $N$ annual payments of a coupon $c$ followed by a final payment of $F$ after $N$ years. If an investor (you?) is willing to pay $P_A$ for that promise, then the yield on the bond is $R_A$ defined by
$$P_A = \frac{c}{1+R_A}+\frac{c}{(1+R_A)^2}+...+\frac{c}{(1+R_A)^N}+\frac{F}{(1+R_A)^N}. $$ Now suppose bond "A" has a well-developed secondary market, so that it can be liquidated easily before maturity; and bond "B" having the same coupons and face payment cannot be liquidated at all, and must be carried by the investor to maturity. If you're like most people, the description of bond "B" is less appealing to you, and you would simply be willing to pay a bit more to own bond "A". So if $P_B<P_A$, then you find that $R_B>R_A$ (by the equation analogous to the one above), and that's all there is to it. Empirically, if the bonds appear to be similar in respects other than "liquidity", a price difference (equivalently, yield spread) may be described as a "liquidity premium".

Not the answer you're looking for? Browse other questions tagged bond credit yield risk-premium liquidity-risk or ask your own question.

5
How to define and measure liquidity or funding premium in credit markets?
2
Why is my YTM incorrect? How does accrued interest play into Yield to Maturity?
4
Yield for valuation of illiquid corporate bond
2
Why does the YTM equal the coupon rate at par?
1
Proving that YTM > Current Yield on Discount Bond
2
Why did high yield corporate bond ETFs tank during the great recession
1
reason behind bond yield diverge for bonds with the same maturity during 2008 crisis
0
Bond Future and Bond Yield relation