What are the advantages of $EVaR$ over $CVaR$?

What is the advantages of $EVaR$ over $CVaR$? Or in what situation, $EVaR$ would perform better than $CVaR$?

The entropic value at risk (EVaR) is a coherent risk measure, developed to tackle some computational inefficiencies of the CVaR. It is the tightest possible upper bound for traditional VaR and CVaR, obtained from the Chernoff inequality.

For the normal distribution, the image shows what is meant by EVaR being an upper bound on both VaR and CVaR. 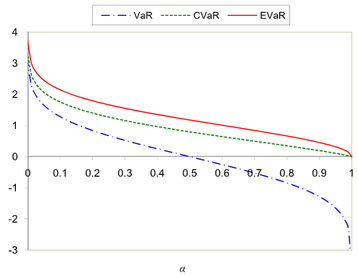 Not the answer you're looking for? Browse other questions tagged risk cvar coherent-risk-measure entropic-value-at-risk or ask your own question.

8
Which is a more appropriate choice of risk measurement in a utility function, CVaR or VaR?
12
What is the meaning of subadditivity in a risk measure?
12
Examples of Spectral Risk Measures
1
What are the different Credit Portfolio Management models and what are their advantages?
5
How to calculate the distortion function for CVaR?
1
When is the VAR equal to the CVAR
1
Mean-EVaR efficient frontier