Markowitz optimization - can two sets of returns produce the same set of weights?

The portfolio optimization problem I have in mind is a minimum variance optimization with positive weights, formulated as below: 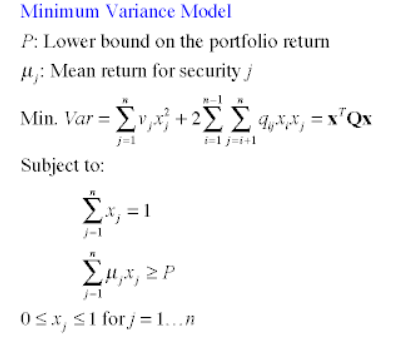 I am trying to show that the solution is unique, specifically in the sense that you could not input two different sets of returns and get the same portfolio (holding all other inputs and higher order moments constant). Is there a concise way to demonstrate that this holds?

Furthermore - does this property hold for all possible portfolios, or only those that lie on the efficient frontier?

Yes, two different set of returns can lead to the same weights (so you won't be able to prove the opposite). Also, the term "unique solution" means something different than how you used it.

I'll give a simple counterexample that shows the mapping isn't injective. Let's assume $p=2$. $Q$ can be anything. Now consider two scenarios:

The solution to your above optimization problem in both cases is $ x= \begin{bmatrix}.5 \\ .5 \end{bmatrix}$. Two different inputs map to the same output, hence the mapping isn't injective.

What people mean by unique solution

When people say an optimization problem has a unique solution, they mean it has a solution and the solution is unique.

They do not mean that the mapping from optimization problem inputs to optimal choice variables is an injective function.

Not the answer you're looking for? Browse other questions tagged portfolio-management portfolio-optimization markowitz or ask your own question.

14
Are there any tools or useful algos for identifying corner portfolios?
5
Why did Markowitz not derive an equation for the efficient frontier?
4
Compute tangency portfolio with asset allocation constraints
1
Relationship between CML and SML
2
Do the minimum VaR and minimum ES portfolios lie on the mean-variance efficient frontier?
2
Cant replicate minimum variance portfolio variance by simulating many random portfolios in R