Consider a multi-period mean-variance portfolio optimization so that at time $t$ I find the strategy that maximizes my expected terminal wealth $X_T$, subject to a constraint on risk, \begin{align*} \Pi_t = \mathbb{E}_t[X_T]-Var_t[X_T]. \end{align*}

There does exist a solution concept that deals with this time-inconsistency and takes future behavior into account (subgame-perfect solution). However, the approach described above seems to be widely used, and I my question is whether it can be rationalized? That is, can it be rational today to decide a strategy that will be sub-optimal tomorrow and thus not carried out?

This is a difficult question per se, but people in the literature have tried different ways of dealing with the time-inconsistency of the mean variance problem.

Basak and Chabakauri (2010) is one of the seminal references.From their paper:

"In this article, we solve the dynamic asset allocation problem of a meanvariance optimizer in an incomplete-market setting and provide a simple, tractable solution for the risky stock holdings. To our knowledge, ours is the first to obtain within a general environment a fully analytical characterization of the dynamically optimal mean-variance policies, from which the investor has no incentive to deviate, namely, the time-consistent policies. "

Also, I have to take a little detour and say that on an optimal life-cycle model the rule highlighted by Bob Jansen though very appealing brings large welfare losses. Take a look at table X from Cocco, Gomes and Maenhout (2005): 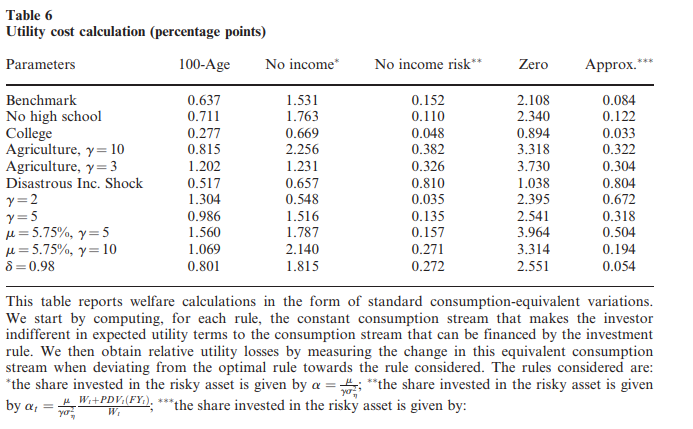 Such a rule brings reduction on consumption equivalent units between 0.5% and 1.6% per anuum.

If for the optimal policy transaction costs are ignored (to simplify the problem) it might be beneficial to choose a policy that appears sub-optimal now and keep that initial portfolio to the end of the investment horizon.

In any case, I would not expect that portfolio weights would predictably change significantly. What makes a stock attractive today, should make it attractive tomorrow. Also, in practice, I would not expect the effect of approaching the horizon will have a large impact on allocation. If you follow the rule of thumb: stock allocation is $100\% - \textrm{age}$, then the change is not even a basis point per day.

If you allow more time between periods so that the above arguments do not hold. It would be nice to make some more general statements about this regarding transactions, updating expectations and certainty around the current set of expectations...

This is a valid question which wasn't conclusively addressed in the literature, although major quant funds have definitely developed various usable approximations. The key point is that any forward-looking portfolio construction is constrained to only currently available information on expected pnl (forecast) and its variance (risk). The morning after will bring new information and updates to these data. It appears that a more consistent approach is based on the optimal control theory including Bellman equation and dynamic programming, things not totally friendly to a clear analytics. My preliminary work on this subject indicates that, if the utility involves only linear and quadratic terms in the control variables (such as portfolio weights), forward-looking (but continuously revised) optimization known as open-loop optimization appears equivalent to optimal control. When slippage-type (absolute-value) costs are involved, this is no longer the case, but the open loop can be fudged with heuristic parameters tunable by backtest. Various approaches to multi-period optimization are discussed in this book.

Not the answer you're looking for? Browse other questions tagged portfolio-management portfolio-optimization asset-allocation mean-variance behavioral-finance or ask your own question.