I am currently researching how to estimate a portfolio's effective mix (essentially figuring which weights to hold in broad indices that would have produced most similar return patterns). Sharpe's methods (1988, 1992) seem to be the framework for such a task, however it seems to me that his procedure does not address the issue of multicollinearity between indices.

I am familiar with some more recent research around his work that involves adding an additional "turnover" constraint -- essentially limiting the magnitude of how much each weight can change per period. However, in my opinion, this is not a true fix for multicollinearity, and it is only attempting to limit the potential effects it could cause.

EDIT: I've been working on this issue for a bit of time now and still have not been able to establish a good solution. The issue with multicollinearity is important due to the fact that I am using a relatively large number of factors in the analysis, and highly correlated factors result in poor/unstable estimates of coefficients.

from my understanding without actually read Sharpe's paper, it's like a linear factor return model. Usually people solve it using OIS or WIS but to address collinearity you can use ridge or lasso regression given if you want to eliminate some factors or not (in which case you will use lasso). These two algorithms just work by adding a penalty term to $\beta$ and thus add a small amount to diagonal terms on covariance matrix and make it invertible.

Adding a turnover constraint has nothing to do with multicollinearity. It's an attempt to limit turnover (ie, cost) in an actual implementation.

If your general if goal is to determine 'optimal' weights across a collection of indexes/etfs, per some generalized framework or objective function, multicollinearity doesn't really come into play. First, MC is really more a regression 'problem', not an optimization one. Second, any collection of broad equity ETFs will be highly correlated (eg, .6+, .8+ for indexes derived from the same region). It comes with the territory.

One alternative would be to use a Bayesian method, as opposed to LASSO, factor analysis or principal components analysis. Bayesian methods do not have a problem with multicollinearity, unless, of course, its perfect collinearity. LASSO can be thought of as a Bayesian method with a Laplace prior distribution and a subsequent loss minimization procedure.

I find two difficulties with LASSO that you may not. The first is that I don't believe the implicit priors. The second is that I can only consider one possible likelihood function to generate the data. A Laplace prior around $\beta=0$ is a bit fanciful. Do you believe that these items do not interact with each other? While LASSO has an effective variable selection process, you cannot test other potential likelihood functions. Bayes would permit you to test both variables and probability models.

The final argument for Bayesian methods is that they cannot double count information. The reason for the absence of linear dependence assumption is that Frequentist methods double count information except when factors are orthogonal. In most cases, the impact is very small, but the fact that people look at variance inflation factors implies that it isn't always small enough.

When items strongly covary, they share an enormous amount of mutual information while possessing very little unique information. Once information has been included in a Bayesian calculation that same information gathered elsewhere will not impact the posterior as it is already in it.

Visually, if you watched the shapes of the posterior evolve as individual items from the sample were included, you would begin with a very unstable, broad and sometimes quickly shifting geometric entity. Assuming a very large sample, you would notice the posterior barely altered with each new observation as Bayes theorem is ignoring any information it has already captured.

I produced the posteriors for a sequence of coin tosses. I was going to do a bivariate, multicollinear regression problem, but then I realized that it would take hours for the Bayesian side of the simulation to run and I don't have the free time. If I can get a bit of free time, I will edit this post with a visual simulation of OLS versus Bayesian regression sampling distributions. It won't be this upcoming week though.

To show the decreasing size of the impact of information from observations, I simulated two hundred coin tosses. The parameter was believed to be larger rather than smaller, so I used a Beta(2,1) prior density, the triangular distribution. It helps to see the impact of prior knowledge on the parameters estimates.

Graph one is that of experiments one to five with the prior included so you readily see how the posterior wiggles around with each additional piece of information. During Rounds One to Five, the Prior has a substantial effect because it is equivalent to observing two successes and one failure, before the first coin toss. 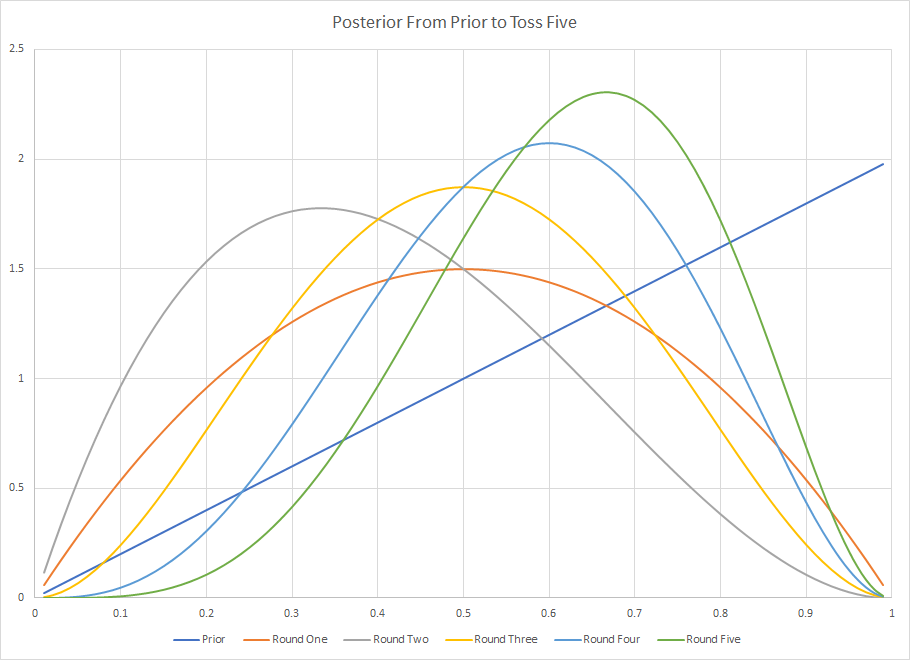 Graph Two is for experiments five through two hundred. As you can see, between rounds twenty and two hundred, the mode is no longer moving around much and while the mass is getting narrower, it is nothing compared to the narrowing from early in the sample, which you can see better in the plot of all posteriors. 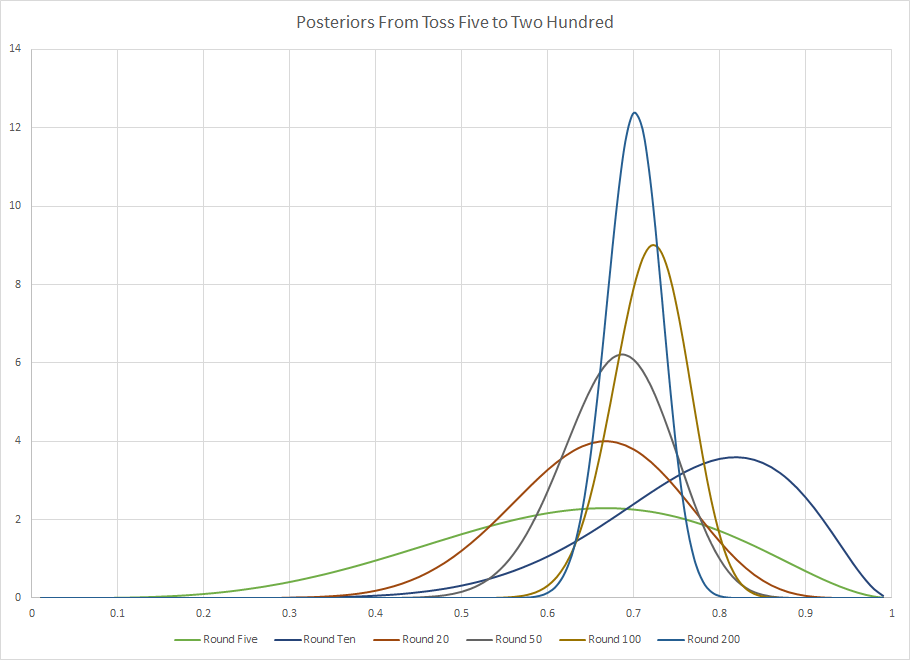 The complete set hopefully makes it a bit more clear how it takes many observations later in the sample to make a small movement when compared with early in the sample. 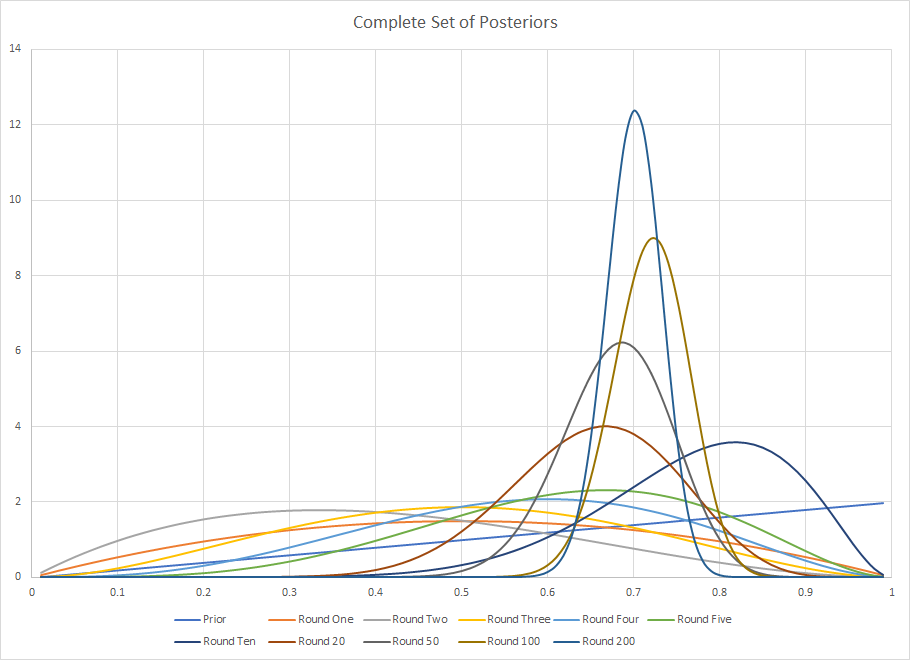 Not the answer you're looking for? Browse other questions tagged modeling or ask your own question.

8
Simple model for option premium (for covered call simulation)?
8
Should I use currency hedged or unhedged returns for a global equity allocation model?
5
Predict Futures Prices based on weather + agricultural data
3
Is there a way to meaningfully generate daily returns from monthly?
6
GARCH volatility modeling, squared returns, and convergence
10
What's the correct choice for modeling correlated stock prices?