How do you explain the volatility smile in the Black-Scholes framework?

Does anyone have an explanation for the currently naturally forming volatility smile (and the variations) in the market?

Consider a more financially plausible model than Black-Scholes: one where the stock can suddenly go bankrupt due to fraud, and the volatility varies over time. Neither model is perfect, but the new one (call it SVJ) will be "less wrong".

Mathematically, we no longer have the Black-Scholes SDE based on a single stochastic generator $W$

but rather an SDE with 3 generators: $W,Z$ and a jump process $J$

It is possible (though not particularly easy) to fit this more complicated, realistic model to the market. Big banks do it all the time.

Any model, including both BS and SVJ, can be run "backwards", by which I mean that it can start with an option price and derive an implied parameter. If the model has $M$ parameters $p_1, p_2, \dots, p_M$ that are normally used to find a model price $V$, then we can also choose any one of the parameters, call it $p_n$, to derive from an observed price $P$ (normally by root-finding techniques).

Let's say we run backwards from market prices to get implied values of $\sigma$ for both Black-Scholes and SVJ. You will observe a far flatter skew for the SVJ. This is true even if we remove either the jumps $J$ or stochastic volatility $Z$.

Here, for example, is a skew in Black-Scholes volatilities arising from pricing an array of options in a proprietary jump-diffusion model with flat (by strike) volatility of 20% 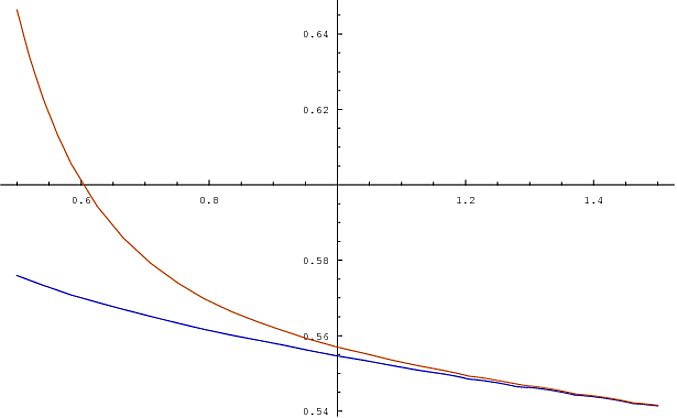 We see that a constant volatility parameter in the jump-diffusion is equivalent to a skew of Black-Scholes volatilities.

Conclusion: the smile comes from the model being too strong a simplification of reality.

Implied volatility has very little to do with any particular pricing model, especially not much with BS. BS is a translation tool between prices and volatility, with its own many model deficiencies. I won't get into such model assumptions because my point is an entirely different one. Even the smile/smirk is entirely unrelated to the Black-Scholes model and I read your question that you like to understand why IVs, far from the money, are higher than close to the money ones.

My point is that IVs are entirely supply and demand driven. Whether its the IVs of an option that expires a year from now or tomorrow, whether its the IV of a 90 put (equity option), 30 delta strike (fx), or any other rates option, commodity option, what have you...

Someone correctly pointed out that most of the origin of the smile/smirk can be traced back to the October 1987 shock ( http://en.wikipedia.org/wiki/Black_Monday_(1987) )

Before pretty much all IVs regardless of moneyness were priced equally. However, the market after the stock market crash found that primarily downside protection was priced way too cheaply. Now I guess the core of the question is why: Most can be attributed to those who generally wrote such options such as sell-side trading desks but especially also floor traders who made markets in such options. They suffered steep losses and found out that they were not enough compensated for writing options such deep out of the money. It has to do with the fact that the market under-estimated the probability of such extreme events happening.

So, in summary, all has to do with how the market prices the probability of shocks (to the down and upside) occurring and their severity.

EDIT: Please keep in mind that most all IVs away from current spot/forward levels exhibit the property of being more richly priced than ATM IVs. On the call side this is the case because nowadays options are often utilized as leveraged bets instead of buying the underlying outright. Put IVs that are struck below current spots/forwards are bought more aggressively because of the desire to protect long positions in the underlying (buy-side fund industry especially). IVs away from the money are simply more demanded than ATM ones because of the above reasons. I recommend you do not read a whole lot more into it than this because trading volatility in the end of the day is nothing else than trading any other asset, prices are set as a pure function of supply and demand, the only difference is that most underlying assets exhibit linear pay off functions where as volatility is non-linear in nature and market participants can exactly define how this non-linearity is structured by trading different strikes or option combinations.

The Black-Scholes model is based on the assumption of lognormal returns of the underlying asset. There is much evidence and argument that stock market returns are not normal on a logarithmic basis, and there is no particular reason to assume a normal distribution, either. In particular an implied volatility smile is evidence of "fat tails" in the returns expected by market participants---excess kurtosis, if you will. It's been pointed out by Taleb that with over 100 years of history, we simply don't have enough data to estimate the tails or the higher moments of the distribution of stock market returns.

That's for the last twenty years less a day of data, and does not include the crash of 1987. For a normal distribution, we would expect the kurtosis to be 3. The excess kurtosis in this case is $11.36604-3=8.36604$, which is still quite significantly not normal. Excess kurtosis means that a distribution has a more peaked center and fatter tails than a normal distribution, which means in the case of options a higher probability that the underlying will take on values far away from its current value come expiration time. This is why, when excess kurtosis is not taken into account, options further from the money appear to imply a higher volatility for the underlying asset.

The volatility smile is made out of implied volatilities. This means that you take as input $K,S,r,T$ and the price of the option $p$ and you use it to find $\sigma$ such that

But $p$ is defined by the market, so the $\sigma$ you find are the estimated volatilities by market participants, if they believe in the Black Scholes framework.

I agree with some arguments above.

One can find several explanattion to volatility smile:

One can find hints on this issue in P.Wilmott's Frequently asked question in quantitative finance

The Black-Scholes model was based on assuming lognormal stock price fluctuations with a constant volatility. However, the modern practice is to use the Black-Scholes formula not as a prediction but merely as a parametrization of option prices, where the observed price of a given option at a given time translates to a "local" implied volatility (IV). Thus, when the resulting IV varies over strikes and over time, it is parametrizing a breakdown of the original Black-Scholes assumptions. Predicting an option price is tautologically reframed as predicting the corresponding IV. At most we can say that if the original Black-Scholes assumptions are roughly right, the IV is roughly constant.

The volatility smile is an expected result of stock price fluctuations with heavier tails than lognormal. That is, sudden very large moves up or down due to news or sentiment shifts, though rare, are less rare than the lognormal distribution indicates. (See the work of Nassim Taleb.) In the absence of a replacement for Black-Scholes that actually models the more accurate distribution, we patch it up by noting that the further out-of-the-money options are priced as if the underlying lognormal volatility were higher (a proxy for the heavier tails).

0
Why implicit volatility has the shape of a "smile"?