I have a need to set-up a methodology to decompose the x-day yield curve moves into its underlying (3) PCAs. Specifically, for an example, to generate the 1-day moves in the EUR-swap yield curve; then explain each day's moves in terms of the 3 PCA's I have generated.

I have found that my PCA-based moves do not correspond to the realized moves; and I am not sure what I might have done wrong in my calculation methodology. My understanding is that, for a specified yield-curve move (from 1yr to 30yr), the moves across the term can be estimated from

My methodology is as follows 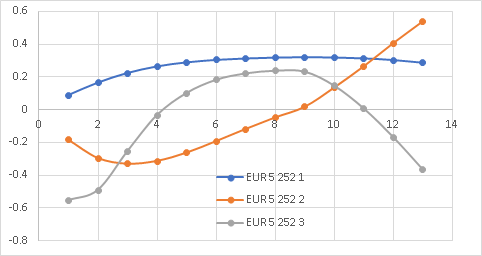 However, my estimation is quite far off. I am not sure if my methodology had anything missing. I referred to some existing threads, but couldn't find something that addressed my practical calculations.

Attributing the change in NII to Shift, Twist and Butterfly

Browse other questions tagged interest-rates yield-curve pca or ask your own question.

4
Attributing the change in NII to Shift, Twist and Butterfly
1
Applications of PCA to yield curve analysis
1
Principal component analysis for yield curve