I'm trying to understand the functioning of "recovery of face-value" approach.

Let $V_t$ the fair-value, that is the price that the holder of a defaultable bond must pay for hedging of default of his counterparty.

This approach says that considering a time range $[0,T]$ and a stopping time $t\leq \tau \leq T$, the investor will receive at the time of default $\tau$ of his counterparty a sum of $(1-\delta_{\tau})P_0(t,T)$, sum that will be quantified in proportion to the value of a no-defaultable bond evaluated in that moment. In particular, that quantity is equal to the product of the price that the stock would have had if it had not been subject to default $P_0(t,T)$ and the Loss Given Default $(1-\delta_{\tau})$, that describes the loss suffered on projected incomes. Note that $\delta_{\tau}$ represents the recovery rate, and the $\tau$ placed as subscript means that also the recovery rate could be a stochastic process, not only the fair-value. However we assuming, for convenience, that this rate is constant: $\delta_{\tau}\equiv \delta$. Now, as I understand it, my text says that fair-value is equal to differential between the prospective gain $(1-\delta_{\tau})P_0(t,T)$ in case of default of counterparty and a fraction of gain that the investor would have obtained if it had not been default in the range of interest (i.e. for $\tau>T$). Formally:

The problem is in the next step. In fact, professor writes that

as you can see here 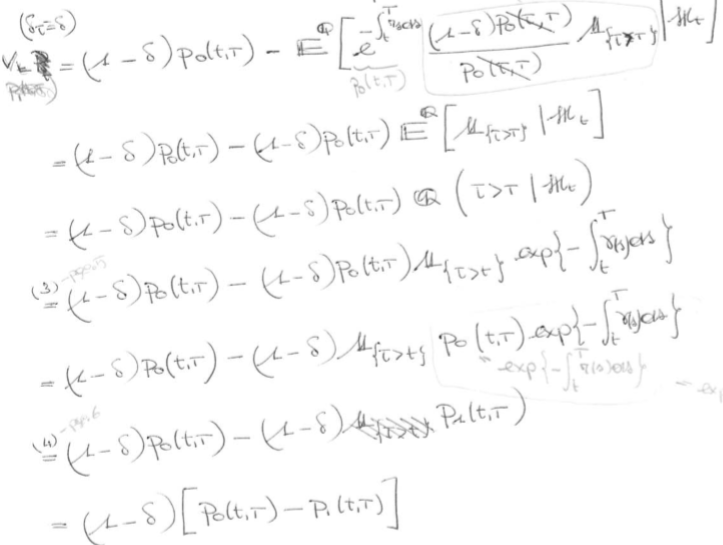 saying that the quantity highlighted is the "countervalue of recovery rate".

2) What justifies the affixing of $P_0(\tau,T)$ in the denominator?

4
What happens when bond price is less than the recovery rate
4
Pricing a bond contract from the yield curve
2
Is credit exposure conditional on default?
1
PDE for Pricing Interest Rate Derivatives
1
For IFRS9, losses should be discounted with the EIR, why is that sensible?
7
Hedging error in a stochastic volatility model