There is a phenomenon in the historical data of the S&P 500 index, of extended periods with repeated occurrences of 'today's open = yesterday's close'.

It could have made sense had it been the case all the time up to a certain date, and then changed due to managerial decision or improved technology, however, this thing comes and goes like an occasional wave. What is that?

Below is a list of these occurrences per year. SPY included for comparison. 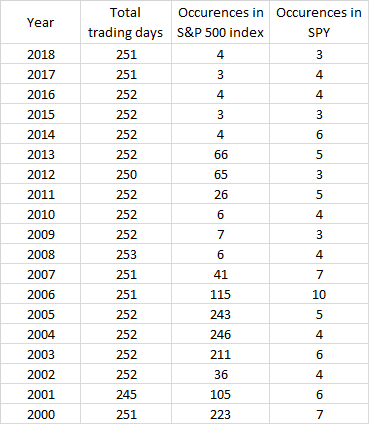 In particular 2004-5, it happened almost all throughout both years! (and yet almost, not all.)

The Dow Jones and Nasdaq Composite do not exhibit this 'feature'. S&P 100, on the other hand, does. Which leads to believe that it has something to do with Standard & Poor's.

If someone could shed light on this mystery...

Browse other questions tagged equities historical-data index indexes or ask your own question.