Absolute and Relative Value at Risk

My thinking is that VaR should be the value corresponding to the 99% worst loss , so if p&l vector has -100, 80, -90, 45, 120 ... until n=500. The worst 5th scenario from the negative numbers is the VaR when the numbers are arranged from smallest to the largest for all 500 observations, with the smallest number starting with a negative value and largest number being positive.

Terminology around some risk measures can sometimes be very precarious. In your first paragraph, you have got things unnecessarily complicated. If you are looking at a sorted vector of 500 P&L, then your 99% VaR would simply be the P&L corresponding to the 4th smallest number in the vector (e.g. $500 \times (1-0.99) = 5$).

In the second paragraph, you pretty much got this.

Absolute VaR is sometimes referred to as conservative VaR or VaR without the mean. However, conservativeness of it is quite questionable, especially if the mean is negative value. Assuming that you did have a positive mean (historically) you will see a similar distribution to the the following: 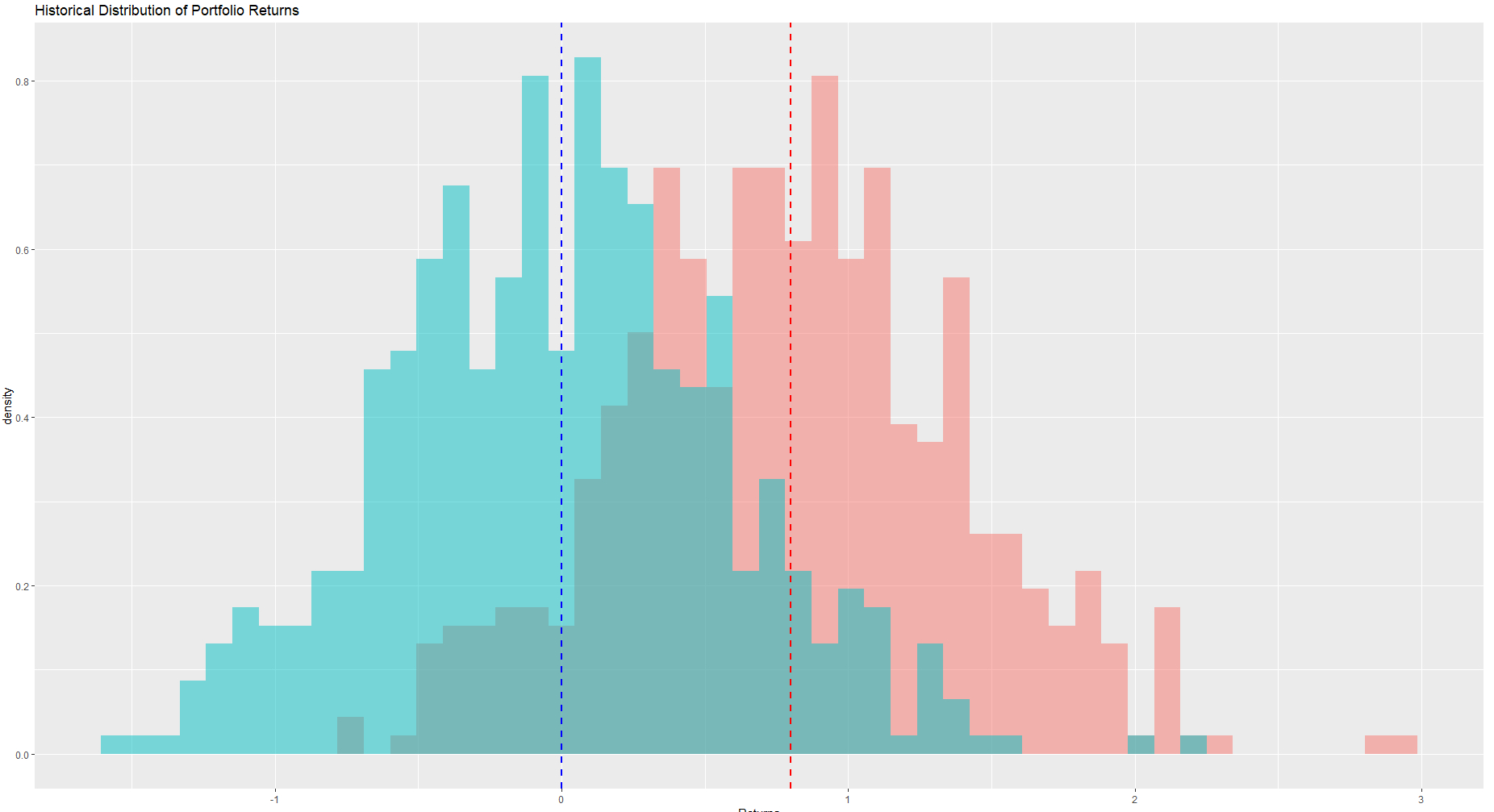 On the left side (blue), you see de-meaned P&L (in percentage terms). And if you calculated your VaR from this distribution, you would get a smaller or more conservative number than the VaR from the distribution on the right side (red).

Also, your future expected return may or may not be equal to the mean return that you calculated using some historical data. Therefore, you would de-mean the series first and add back your expected mean to the P&L, if you wanted to see more realistic or as you wrote above, Relative VaR.

Keep in mind that a coherent risk measure should satisfy the monotonicity criteria, which VaR actually does. What this criteria states is that if you have the same P&L distribution, but the means (or expected returns) are different, the you would have less risk for the distribution with higher mean.

Not the answer you're looking for? Browse other questions tagged value-at-risk risk-models financial-markets or ask your own question.

1
Value-at-Risk “hiding risk in the tail” and diversification?
0
Calculating VaR of an Incomplete Distribution
1
Value-at-Risk and dividend payments
3
How to compute a single Value-at-Risk (a single quantile) of portfolio returns taking into account correlation between individual returns?
1
Computing Montecarlo VaR for a single asset
1
Value-at-risk and Equity delta
4
99.97% Percentile VaR Approximation
1
Value at Risk under increasing function