The similarity between a bond's quoted bid price and its clean price?

The data is from Thomson Reuters Datastream. The spreadsheet in the picture shows 2 bonds for a period of 2 weeks, but I see the "bid price" = "clean price" occurring for another 200+ bonds over 5 years. 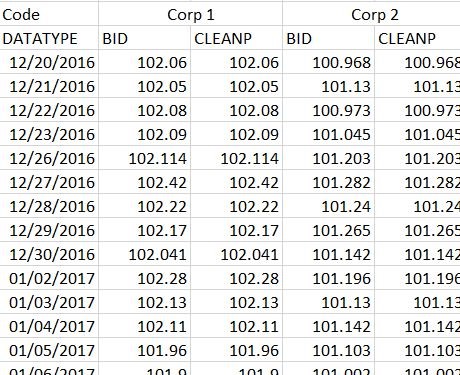 The quoting convention for almost all bonds is clean (without accrued) rather than dirty (with accrued, all-in). Generally, bonds are quoted dirty in two cases:

2 In some foreign markets, it's just a market convention that all bonds are quoted dirty. (For example Brazil NTNs or Argentine bodens).

So.. I would interpret this Reuters data to mean that one column is the best bid using the market convention and the other column is the corresponding clean price (which is the same, except for rare cases when the bond is quoted dirty). You're probably better off asking Reuters tech support whether this is what they mean.

Not the answer you're looking for? Browse other questions tagged fixed-income market-data or ask your own question.

3
How to properly interpret accrued interest of bonds
3
What are the advantages of knowing the bid and ask over the best bid and ask?
2
Price difference between bond cash and futures
2
What is the clean price and dirty price of a risky bond?
0
How to derive the relationship between log yield and log price?
4
Pricing a fixed rate bond in Quantlib Python
4
What is the price of a bond that settles on its coupon date?