In the exercise we are given, possible contracts to buy/sell and possibility to take credits / make deposits money with current market rates. We are asked if its possible to make profit at time T=0 and if yes then we should describe the strategy that guarantees this profit.

And I found out that indeed one can make money, If one sells short the bond and allocates the 103 (income from the short sell) on the 3 months deposits according to current market rate, rolling it for 3 years, and secure this with 3Y IRS (receiving fixed leg), such that one would receive 5% each year (instead of LIBOR*103*3/12 every 3 months)

The only problem is that in my cash flows I am missing money at T=1Y and T=2Y to pay the part of the coupon that exceeds what gets covered by the IRS's 103*5% of the short sold bond. My lecturer told me that I apparently I can solve this by taking credits and securing it with the "remaining" IRS contracts, unfortunately I cannot really see how.

I don't know where to begin with the potential problems calling this an "arbitrage", but here then below is the kind of "answer" I suspect your lecturer is looking for: 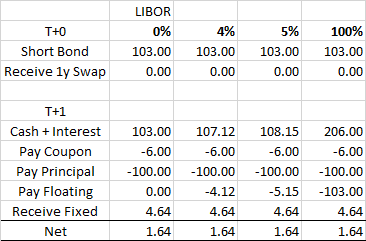 If you're supposed to use the 2y or 3y in any way, the "arb" becomes a "carry trade", as played by many a carry-and-roll junkie ;-)

6
Arbitrage with freshly issued bonds
5
meaning of discount term in FRA value
2
Forward parity in fixed income
2
How was money made from bond yield convergence?
1
Why rise in repo rates leads to increase in forward bond prices?
2
what are the underlying transactions for SOFR?
9
ETF Market Making - Locking profits via hedging