Value at Risk for portfolio with different maturities

I am new to StackExchange and relatively new to quantitative finance. I work at a commodity trading company and we have an extensive portfolio of futures and options on commodities (traded on the CME, EEX and NZX). We are trying to implement a Value at Risk model in order to quantify the risk on our outstanding positions. In order to do this I am using the historical method. Namely, for each instrument I have 200 historical time series data points. From those I compute the daily returns (in absolute dollar value). This leaves me with 199 returns. For options I multiply the daily dollar returns of the underlying by the delta of the option in question and add 1/2*gamma*returns**2. I add all the returns calculated in this way leaving me with 199 total portfolio returns. From here it is easy to pick the lowest 5 percentile. 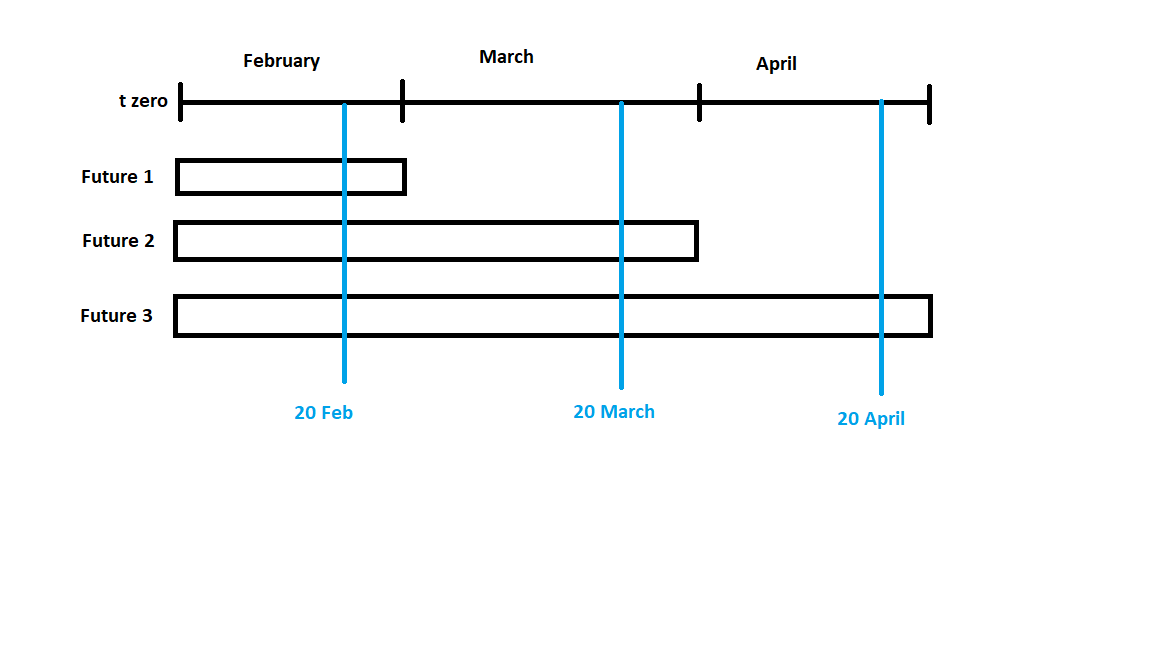 If I want to calculate the 20-day VaR, so how much we could loose by the 20th of February (assuming today is the 31st of January), then I follow the procedure I described above with the historical returns of the 3 futures. I will get a 1 day VaR which I multiply by sqrt(20) to get the 20-day VaR. Simple enough. Now our CFO says that if we need to calculate the 49-day VaR (leading us to the 20th of March) we should somehow take into account the fact that Future 1 matures at the end of February and that from the 1st of March to the 20th of March the risk is only 'given' by Future 2 and 3.

My question is, is this somehow possible to do with VaR? Is this correct? I recall reading somewhere that an assumption of VaR is that the portfolio's composition does not change over the holding period.

If someone could help clear up this doubt it would be immensely helpful. Thank you in advance!

EDIT 11/02/2020: If VaR is indeed not the proper method for my question could someone suggest a possible alternative way of tackling the problem? Thank you!

That is not the traditional representation of VaR. Normally, a VaR measure reflects the current risk exposure of the portfolio and measures its loss based on market movements, i.e. via an instantaneous shock to those positions, whether those market movements are supposed to reflect 1-day, 5-day, 50-day or 1-year, for example.

Generally VaR does not account for evolution of trades, i.e. new trading and existing maturities. For example suppose you have a large position in the Feb contract, hedged by an equivalent position in the March contract, giving rise to a reasonably small risk exposure overall. This might be typical of the trading style you employ, but historically you have never left the March contract 'naked' after the Feb contract expires: it has always been closed simultaneously as Feb matured. If the March contract was left 'naked' your VaR might increase 10-100 times, but by closing simultaneously you reduce it to zero.

Therefore VaR, as a model, is not required to make these assumptions. For some trading portfolios, where the liquidity of the positions as they expire is difficult to re-hedge, these concerns (as an additional risk consideration outside of VaR) can be useful, but they are not common, fairly nuanced, and not well known. I have for example used a statistical process for use in fixing risk of LIBOR exposures as they roll off on a daily basis, but this risk has always been excluded from my VaR calculations.

Essentially a better characterisation of risk is to calculate the 1d-horizon VaR for every day in the next say 180 days (6m) using a forward forecast portfolio, and then statistically aggregate the values. E.g assume the PnL over the next 180 days is the sum of 180 (daily) random variables whose variance has been individually assessed via portfolio risk forecasting.

Not the answer you're looking for? Browse other questions tagged options futures portfolio value-at-risk commodities or ask your own question.

17
Is there a step-by-step guide for calculating portfolio VaR using monte carlo simulations
2
Historical Value At Risk on option portfolio
7
Value at Risk for Futures Contracts
3
Futures Parameters for Value at Risk
2
Volatility scenario generation for value-at-risk
3
How to compute a single Value-at-Risk (a single quantile) of portfolio returns taking into account correlation between individual returns?
2
The VaR of a portfolio with Student t returns
0
Someone help me understand why for portfolio variance or Parametric Value at Risk we have to compute the covariance matrix?